The global bio-implant market size was estimated at USD 65.0 billion in 2018 and will exhibit a CAGR of 5.9% during the forecast period. Rising adoption of bio-implant procedures, over arthroscopy and other therapy treatments such as physiotherapy, is a major factor driving the market. This preference is attributed to associated benefits such as higher success rate and biocompatibility. Other factors propelling the market include increasing prevalence of cardiovascular diseases (CVD) and orthopedic ailments, large geriatric population base, lifestyle changes, and rising adoption of cosmetic surgeries.

The market is also driven by rising awareness about cosmetic implants and advancements in bioengineering technologies. Demand for non-surgical or minimally invasive bio-implants is growing in numerous medical disciplines. For instance, an increasing number of dental patients are choosing to opt for bio-implants as an easier and more effective alternative to a root canal procedure. Alarming increase in oral healthcare problems will further stimulate demand for bio-implants. For instance, WHO’s 2016 Global Burden of Disease Study (GBDS) estimated that oral diseases affected around half of the population worldwide. Almost 3.58 billion people were known to be affected by dental caries and various tooth problems. This will provide a wider addressable market in the near future. 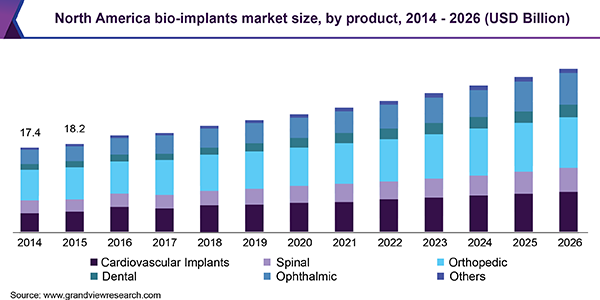 Sedentary lifestyle has been the root cause of numerous chronic disorders such as CVD, congenital and neuropathic disorders, and osteoarthritis. This has propelled the demand for bio-implants across the globe. For instance, according to the National Spinal Cord Injury Statistical Center, almost 54.0% of the population in the U.S. was suffering from spinal cord injury in 2016. These incidences are expected to affect almost 60% of the U.S. population by 2020, resulting in growth opportunities for the market.

Technological advancements in manufacturing of bio-implants, such as 3D printing, laser technology, and nanotechnology, have significantly enhanced the biocompatibility of these products. These efforts are strongly supported by rise in healthcare funding by governments around the world. A number of government bodies are teaming up with healthcare research and manufacturing companies to bring innovative and more effective devices to the market. For instance, in June 2019, the Government of Kazakhstan expressed its interest in joining forces with MIDHANI, an Indian bio-implant manufacturer, to produce titanium bio-implants on a commercial scale.

Based on product, orthopedic implants accounted for the leading share in 2018. This can be attributed to factors such as rising adoption of implants in orthopedic surgeries, rising incidence of orthopedic diseases, and favorable reimbursement policies by various governments. According to the Centers for Disease Control and Prevention (CDC), in 2017, almost 54.4 million adults were suffering from arthritis in U.S. alone.

On the other hand, dental implants are expected to grow at a higher rate during the forecast period due to factors such as ageing population with more tooth deformities and increasing demand for dental and cosmetic surgeries. The American Academy of Implant Dentistry estimated in 2017 that more than 69.0% of Americans of between 35 and 44 years of age have one missing tooth. Moreover, sedentary lifestyle and increasing consumption of tobacco and nicotine are also expected to increase dental issues in the coming years. This will have an overall impact on demand for bio-implants in the dental category.

Based on material, the biomaterial metal segment commanded the largest share in the bio-implant market in 2018 and is expected to maintain its position over the forecast period. Associated advantages such as higher tensile strength, coupled with resistance to corrosion as compared to other materials like ceramics and alloys, are major growth drivers for this segment. Applications of biomaterial metals include dental implants, joint replacement implants, and pacemaker cases.

On the other hand, ceramic implants are expected to grow at a significant rate during the forecast period. Ceramics have been garnering much interest mainly because of their ability to deliver a necessary mechanical function for tissue reconstruction. Furthermore, bio-ceramics, with their additional capability of stimulating bone regeneration tissues, are anticipated to gain faster adoption in the coming years.

On the basis of origin, xenografts commanded the leading market share in 2018, majorly due to their biological origin, which makes them more compatible with the human body. On the other hand, allografts are expected to grow at a higher rate during the forecast period. This is attributed to benefits such as lower risk of harvest site morbidity, reduced postoperative pain, as well as shorter surgical and recovery time. According to insights by LifeLink Tissue Bank in 2018, over 1.7 million allografts are implanted each year in the U.S. These grafts are employed in almost all surgical disciplines, such as orthopedic, gynecology, cardiac surgery, and neurology.

Based on end use, the market is segmented into hospitals, clinics, and specialty centers. Hospitals held the dominant share in the market in 2018 and will retain its lead throughout the forecast period. This can be attributed to large patient footfall and favorable reimbursement policies for costly implants, such as pacemakers, in government hospitals. Clinics accounted for the second largest revenue share in 2018 and will exhibit steady growth through 2026. 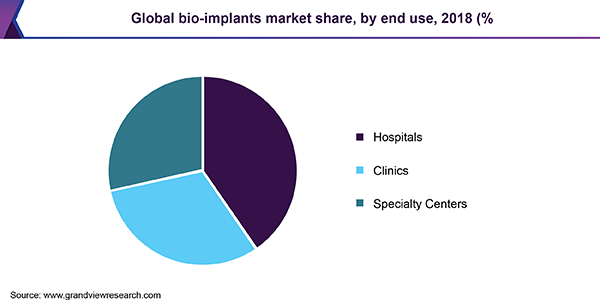 However, in recent years, there has been growing inclination for specialty centers when it comes to treatment of various cardiac and orthopedic diseases. This can be attributed to rising awareness about different conditions and their treatment options as well as increasing disposable income. These specialized centers contribute to the goal of better clinical outcomes at reduced costs, as these settings are suited to match precise medical conditions. These factors are expected to propel the growth of the segment during the forecast period.

North America is anticipated to dominate the global market owing to factors such as increasing number of surgical procedures needing implants and rising adoption of advanced technologies across various medical disciplines.According to the Organisation for Economic Co-operation and Development (OECD) Health Statistics, more than 1.4 million orthopedic procedures were conducted in 2017, including hip and knee replacement surgeries, which is poised to grow in the near future. This is likely to benefit regional growth.

Europe is the second largest market for bio-implants, fueled by government funding and support, rising incidence of orthopedic disorders, and growing R&D activities. For instance, many pacemaker manufacturers are working on developing MRI-conditional and leadless pacemakers. Furthermore, increasing number of CVD surgeries, on the heels of rising prevalence of the condition, is propelling market growth.

Asia Pacific is projected to be the fastest-growing market over the forecast period, primarily owing to high incidence of spinal cord injuries. This can be attributed to an alarming occurrence of road accidents. According to Tokyo’s Keio University’s 2019 publication, more than 100,000 patients in Japan are paralyzed due to spinal cord injuries. However, recent approval of iPS technology in the country is expected to help such patients in the coming years, leading to new market opportunity for bio-implants.

Increasing number of acquisitions and mergers, rising number of partnerships and collaborations, new product launches, and growing research and development activities are some of the key trends observed in the global market. For instance, in March 2018, Orthofix International N.V. acquired Spinal Kinetics Inc., a privately held manufacturer and developer of lumbar discs and artificial cervical. The move was aimed at strengthening Orthofix’s orthobiologics bio-implant product portfolio.

MaterialsCare’s 3D printing methods for bio-implants are currently solely dedicated for veterinarian use; however, the company has stated that the technology will be available for human use by the end of 2021. Similarly, technological advancements have created new opportunities for players in biomaterial development. For instance, LifeNet’s patented technology for allografts, Matracell, is currently used by most major players in market for bio-implants, including Stryker and Arthrex.

This report forecasts revenue growth at global, regional, and country levels and provides an analysis on latest industry trends in each of the sub-segments from 2014 to 2026. For the purpose of this study, Grand View Research has segmented the global bio-implant market report on the basis of product, material, origin, end use, and region: