The global biophotonics market is poised to renovate the healthcare sector worldwide. The increasing geriatric population, rising frequency of chronic diseases, growing government initiatives, increasing healthcare amends, and incorporation of IT into the healthcare application are expected to remarkably fuel the biophotonics market during the forecast period. The upsurge in the number of photonic components in the prevailing healthcare instruments for value enhancement and higher accuracy & sensitivity is projected to create a major impact on the market in the next few years. Furthermore, the administration of environmental dynamics, including water and food sources, is further anticipated to fuel the market growth. 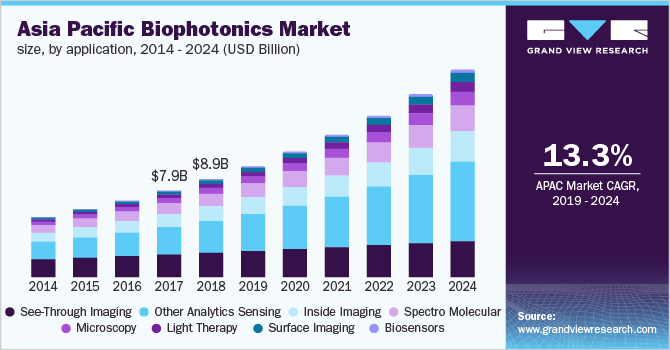 The noteworthy technological advancements over the decade and their espousal in the medical sector are anticipated to drive the market demand in the near future. Furthermore, the emergence of nanotechnology, coupled with the increasing demand for home-based Point-of-Care (POC) devices, is expected to spur the market growth in the near future. Improvements in optical technologies in the aerospace & telecom sectors, paired with the availability of private & government funds for R&D, are also expected to favorably impact the market growth.

However, the complexity of the biophotonics technology, coupled with the high price of biophotonics-based instruments, is projected to negatively impact market growth. The slow commercialization rate and reluctance toward the acceptance of new treatment practices are also hampering the market growth.

The application segment is segregated as see-through imaging, microscopy, inside imaging, spectro molecular, other analytics sensing, light therapy, surface imaging, and biosensors. In 2013, the see-through imaging fragment accounted for the largest market share due to the incessant demand for radical non-invasive surgical procedures in several medical fields, such as cardiology, neurology, brain imaging, and oncology. However, light therapy is the fastest-growing application segment.

There have been noteworthy improvements in the field of see-through imaging techniques in the past decade, particularly in medical diagnostics and drug discovery. Moreover, see-through imaging has appeared as an operative tool for in-vitro and in-vivo imaging and is becoming an essential part of biomedical research. However, an essential factor contributing to the growth of the surface imaging market is endoscopy, which has been experiencing exponential growth for many years. This may be attributed to the increasing patient acceptance for marginally invasive procedures for treatment along with the diagnosis.

The key end-use segments comprise test & components, medical therapeutics, medical diagnostics, and non-medical. The medical diagnostics segment held the largest market share in 2013, owing to its adoption by several end-users which include healthcare providers, instrument manufacturers, medical institutes, and research laboratories. However, the non-medical application is expected to gain prominence over the forecast period, owing to its environmental screening and monitoring capabilities.

The upsurge in the study regarding pathogen exposures in agriculture food items, unceasing blood monitoring, and inhibition of unauthorized data visualization is projected to significantly drive the biophotonics market for several non-medical applications. Biophotonics further finds its use in the study of the working of molecular mechanisms, DNA, proteins, and other important molecules.

The North American biophotonics market held the largest market share, owing to the surging R&D initiatives, increasing investments in the healthcare industry, and accessibility to the excellent infrastructure. The rising aged population, coupled with the growing number of cancer patients, is expected to spur the regional market growth during the next few years.

Asia Pacific is projected to emerge as the fastest-growing region over the forecast period. This is attributed to the escalating industrialization in countries such as China, Malaysia, India, and South Korea. The biophotonics market in Asia Pacific is expected to gain prominence over the next few years, owing to the surging government initiatives, enhancements in healthcare facilities, and rising investment by the key market players.

The key market players comprise Carl Zeiss, Hamamatsu Technologies, BD (Becton, Dickinson and Company), Andor Technology Ltd Affymetrix Inc., and Olympus America. These companies are expected to grab a greater market share, owing to their early entry as compared to the rest of the players. The key players are aiming at increasing technological advancements by miniaturizing the instruments coupled with enhanced cost efficiency. The market is characterized by key mergers and acquisitions. For instance, in July 2012, Idex Corp. acquired Precision Photonics Corp. with the aim of initiating in-house production of optical components and subsequently enhancing cost-efficiency.