The global biorationals market size was valued at over USD 1.0 billion in 2015. Increasing adoption of integrated pest management is expected to steer industry growth over the forecast period. Adverse impacts of synthetic pesticides on beneficial organisms in farmland and terrestrial ecosystems have offered ample scope for bio-based products.

The high content of active ingredients and degradation metabolites from residues left on cereals and vegetables can impair the endocrine system in humans. This has led to stringent regulatory norms on the maximum residue level (MRL) of pest control agents used in agriculture. The European Union has laid down various guidelines in this regard, which has led to the withdrawal of conventional pesticides in the region. 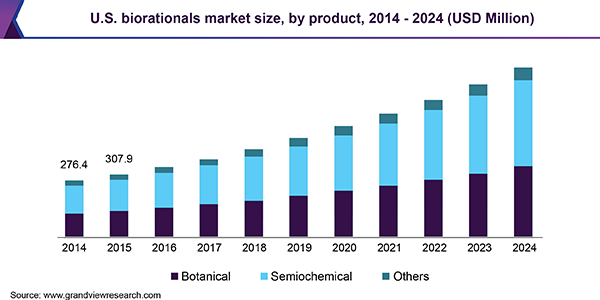 Eco-control products are characterized by negligible MRL risks, thereby offering ample opportunities for enterprises to enhance their R&D investment and develop efficient products over the long term. Biorational pesticides have witnessed increasing acceptance among agricultural farm owners as these are efficient in pest resistance. This has steered significant demand for major products such as pheromones, neem extracts, essential oils, and repellants over the past few years.

According to a United Nations (UN) report, the global population is expected to reach 8.5 billion by 2030 and demand for agricultural commodities is expected to double over the forthcoming years. Addressing the problem of food security by utilizing sustainable strategies has steered demand for natural pesticides over the past few years.

Semiochemicals are expected to register a CAGR of 12.1% from 2016 to 2024. Increasing adoption of efficient monitoring and quality control techniques in the agricultural industry has contributed to segment growth. Insect sex pheromone traps and allelochemicals are major products that are expected to steer the segment over the next few years.

Demand for this product segment is likely to be catered to by agriculture-driven countries such as India, China, and Brazil. In addition, expansion of population in these aforementioned countries is likely to trigger demand for agricultural products, thereby boosting the semiochemicals segment over the forecast period.

The botanicals segment was valued at over USD 400.0 million in 2015. Natural plant products in this criterion have witnessed increasing demand for use as insecticides and to control pests such as red spider mite, aphids, termites, and nematodes. However, high rate of degradability and high production costs are expected to hamper its growth in the medium term.

Fruits and vegetables emerged as the leading segment in the global biorationals market and are anticipated to register an estimated CAGR of more than 12.0% over the forecast years. Growing concerns regarding insects such as coleopterous on citrus, pome, and berry fruits is anticipated to steer demand for antifeedants and insect growth regulators over the forecast period. 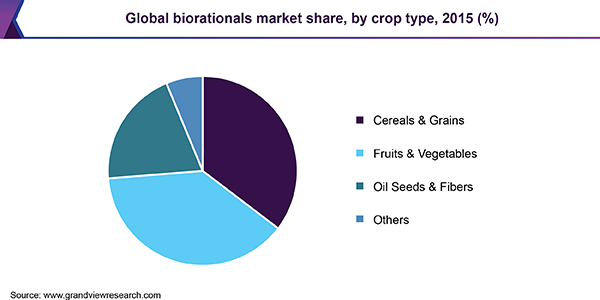 The cereals and grains segment is characterized by high frequency of bug diseases and subsequent economic losses. Growing concerns over aphids has urged cereal producers to adopt biocontrol agents such as pheromone traps and semiochemicals for effective insect control. The segment is expected to generate revenue exceeding USD 1.0 billion by 2024.

High content of active ingredients and degradation of metabolites from residues left on cereals and vegetables can impair the endocrine system in humans. Eco-control products are characterized by negligible MRL risks, thereby offering ample opportunities for enterprises to enhance their R&D investment and develop efficient products in the long run.

North America dominated the global biorationals market in 2015 and the region is anticipated to exhibit a CAGR of more than 11.5% over the forecast period. Stringent regulatory framework against synthetic pesticides has contributed tremendously toward product penetration in the region. Various agri-business initiatives are being adopted by food processors and farming enterprises to address growing concerns regarding food security. Ongoing industrialization of the food system, particularly in U.S. and Canada, is anticipated to drive investments for enhancing crop yield rates with minimal environmental impact.

Increasing demand for low-priced and high-quality organic commodities from Mexico, India, and China has urged crop producers to enhance productivity and minimize losses associated with pests. This has urged various agro-producers to adopt biorationals that enhance crop yield, thereby gaining a competitive edge over other entities.

According to the Research Institute of Organic Agriculture survey in 2014, Asia Pacific has the highest number of organic producers with over 8.5 million companies in the region. The report further illustrated that India had over 600 thousand producers in 2013. Biorational demand in Asia Pacific is characterized by slow growth, mainly due to high demand for low priced and efficient synthetic pesticides.

The India market is anticipated to exceed USD 110 million by 2024. Low product penetration in the region can be attributed to lack of awareness among farming communities and comparatively low efficiency of natural pesticides in pest control. Various countries in Europe and the Americas are export destinations for fruits, grains, cash crops, and ornamental producers in Asia Pacific.

However, rejection of agrifood exports to Europe and North America are primarily associated with pesticide residues, microbiological contaminants, and unsanitary containers. Stringent regulatory norms regarding MRL in the aforementioned regions are expected to steer demand for biorationals toward Asia Pacific over the next few years.

The global market is highly dynamic in nature, with increasing investment in R&D for product development by various players. Companies are focusing on obtaining high purity products for various segments such as cereals and grains as well as fruits and vegetables.