The global bipolar forceps market size was valued at USD 776.4 million in 2019 and is expected to grow at a compound annual growth rate (CAGR) of 4.7% from 2020 to 2027. The market for bipolar forceps is majorly driven by factors such as the growing prevalence of chronic diseases, increasing inclination for minimally invasive procedures, and the technological advancements catering to patient requirements. Manufacturers are developing superior products for various microsurgical specialties by collaborating with physicians. For instance, in 2015, Kirwan Surgical Products LLC partnered with researchers at the Neurosurgery Research and Education Foundation (NREF) to develop COHEN bipolar forceps. The bipolar forceps offer additional comfort during surgery with the help of cushioned padding, while the new design offers enhanced visualization. In 2016, Kirwan Surgical Products further stated that royalties from the sale of the forceps will be donated to the Medical Student Summer Research Fund at NREF. 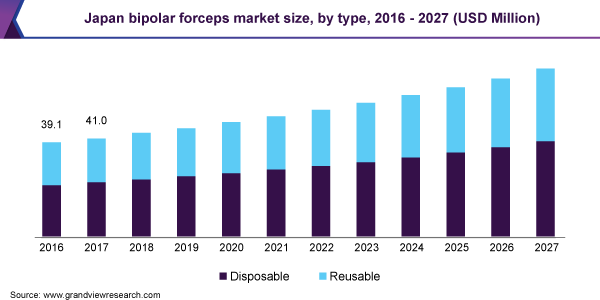 Government organizations are undertaking initiatives to improve access to these advanced electrosurgical systems in medical settings. According to an article published by Modern Healthcare, the adoption of electrosurgical units in hospitals increased to 60% in 2015, as compared to 55% in 2014. Thus, physicians are increasingly adopting advanced surgical systems, as they enhance surgical efficacy.

The disposable segment dominated the bipolar forceps market and accounted for the largest revenue share of 56.7% in 2019. The high preference for disposable bipolar forceps is mainly attributed to factors such as shorter turnaround time, reduce toxic smoke, and compatibility with electrosurgical generators.

In addition, they minimize the chance of infections, which are mainly registered in reused surgical equipment. The market players are focused on offering novel bipolar forceps for precise delivery and visualization for the narrow surgical field. In 2014, Codman Neuro launched disposable dual irrigating forceps - Spetzler-Malis - for neurosurgery.

The hospital segment dominated the market for bipolar forceps and accounted for the largest revenue share of 40.5% in 2019. This can be attributable to factors such as increasing patient awareness, availability of advanced medical devices, and increasing focus on positive medical outcomes. The hospital settings are adopting minimally invasive procedures to reduce post-operative complications, which are mainly observed in open surgeries. As per research conducted by Johns Hopkins investigators in 2015, hospitals can save USD 300 million annually by preventing post-surgical complications by opting for minimally invasive procedures.

The ambulatory surgical center segment is expected to showcase the fastest growth rate in the market for bipolar forceps during the forecast period. This can be attributable to the growing surgical interventions carried out due to factors such as low surgical cost, and convenience for elderly and disabled populations. As per Medpac estimates in 2019, the number of ASCs increased by 2.4 percent in 2017. 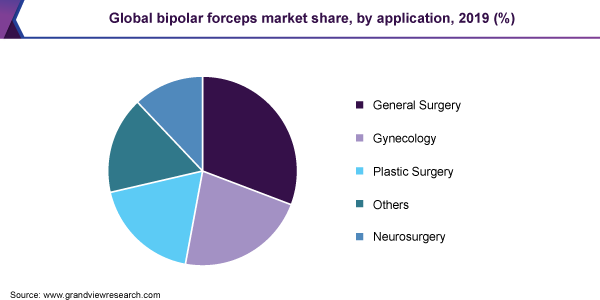 The gynecology segment is expected to exhibit the highest growth rate over the forecast period in the market for bipolar forceps. The minimally invasive surgeries lead to less postoperative pain, resulting in shorter hospital stays. According to the Centers for Disease Control and Prevention, an estimated 1,208,176 cesarean deliveries were performed in the U.S. in 2018.

North America dominated the market for bipolar forceps and captured the largest revenue share of 40.0% in 2019. The region is expected to continue its dominance over the forecast period. Regionally, the market for bipolar forceps is segmented into North America, Latin America, Europe, Asia Pacific, the Middle East & Africa. This dominance is attributed to factors such as developed healthcare infrastructure, the local presence of major players, and high disposable income. In addition, increasing incidence of cardiovascular and neurological diseases are the factors expected to result in a subsequent rise in surgical procedures. According to the American Heart Association, over 92.1 million individuals were living with some form of cardiovascular disease in the year 2017.

In Asia Pacific, the market for bipolar forceps is expected to grow at a lucrative rate over the forecast period. The high growth rate in the region is primarily attributed to the rise in the geriatric population in Japan, China, and India. Japan has the highest percentage of geriatric population, which requires increased care and attention in terms of health. According to the National Census 2015 report, nearly 26.7% of the total Japanese population is aged 65 years and above, leading to a high prevalence of chronic diseases in the country.

The market for bipolar forceps is highly fragmented with the presence of various large, medium, and small-scale vendors. Product launch, strategic acquisitions, and innovations are some of the major strategies adopted by the market players to retain their market share. Some of the prominent players in the bipolar forceps market include:

This report forecasts revenue growth at global, regional, and country levels and provides an analysis of the latest industry trends in each of the sub-segments from 2016 to 2027. For the purpose of this study, Grand View Research has segmented the global bipolar forceps market report based on type, application, end-use, and region:

How big is the bipolar forceps market?

What is the bipolar forceps market growth?

Which segment accounted for the largest bipolar forceps market share?

b. North America dominated the bipolar forceps market with a share of 40.0% in 2019. This is attributable to rising healthcare awareness, increasing incidence of neurological and cardiovascular conditions, and constant research and development initiatives.

Who are the key players in the bipolar forceps market?

What are the factors driving the bipolar forceps market?

b. Key factors that are driving the bipolar forceps market growth include increasing minimally invasive procedures, increasing prevalence of chronic diseases, and technological innovation across the world.