The global Bisphenol A market size was estimated at 7,200 Kilo tons in 2018. Bisphenol A (BPA) is a synthetic compound derived from styrene, acrylonitrile, and butadiene. It is primarily used to produce polycarbonate and is one of the key monomers in producing epoxy resins. It also plays an important role in the manufacturing of unsaturated polyester resin, polyacrylate, polyetherimide, flame retardants, and polysulfone resins. It is a colorless crystalline solid that is highly soluble in organic solvents although incompetent in terms of solubility with water.

BPA is employed to manufacture epoxy resins and certain plastics. Plastic made of BPA exhibits superior properties such as heat & chemical resistance, durability & strength at low temperature, and easy processing ability making it appropriate to manufacture a variety of consumer goods such as sports equipment, electronic equipment, water bottles, DVDs, and CDs. BPA-based epoxy resins are used as a coating inside many beverage cans, to line water pipes, and in thermal paper. However, due to health-related issues, some nations have banned the use of epoxy resins. Since the inappropriate intake quantity of EPA derivatives makes causes serious health issues. This replaced the use of epoxy resins with PET film in some regional markets.

It is also used in the synthesis of polyether ketones and polysulfones which are used as antioxidants in some plasticizers and as a polymerization inhibitor in PVC pipes. One of the key drivers of this market is the efficient use of polycarbonate in manufacturing plastics. The demand for consumer goods, medical & dental devices, eyeglass lenses, dental sealants, and foundry castings has significantly increased the demand for polycarbonate in the manufacturing industry.

Future demand for BPA depends upon the overall health of the world economy, as its end-use market includes construction, automotive and electronic industries. The market driver of the epoxy resin market is its high-quality performance in various industrial applications for thermal stability, corrosion protection, moisture resistivity mechanical strength, and adhesion. Growing research and development efforts has been expected to create a huge opportunity for the market. Increasing public awareness of health concerns associated with the use of BPA in food contact applications is the key challenge to this market, as inappropriate intake of BPA may cause health issues.

The prices of bisphenol A or on the rise owing to healthy demand from downstream chemicals. China which is a major exporter of polycarbonate is keeping a pricing gap of USD 1000/ton between the polymer and raw material. Strong demand for polycarbonate is expected to result in high prices for bisphenol A for the next 2 years.

Polycarbonates have been experienced as the most dominant application segment, both regarding consumption and production followed by epoxy resins. Owing to the strong demand from various end-use industries. Other Key applications of BPA include unsaturated polyester resins, flame retardants, polyetherimide, polyacrylate, and polysulfone resins. A wide range of applications in industrial end-use is the key driver of the market. Some significant Consumer goods application of polycarbonate and epoxy resins includes computers, cell phones, bicycle helmets, household appliances, and flooring.

Asia Pacific is one of the largest manufacturers and consumers of BPA as compared to other regions. This is primarily due to the large end-user industries located in the region coupled with low labor, raw material, and operating costs. Also, various manufacturing companies of the West have shifted their units to the Asia Pacific due to the above-mentioned factors. North America and Europe are other key regional markets. There exists a significant amount of dissension over the health effects of BPA.

The government of the European Union and Canada have banned the use of polycarbonate resins in baby bottles. Although there is no official ban in the U.S., baby bottles have been pulled from the market due to the concern of health effects. These government regulations have restrained the market growth so some regions. 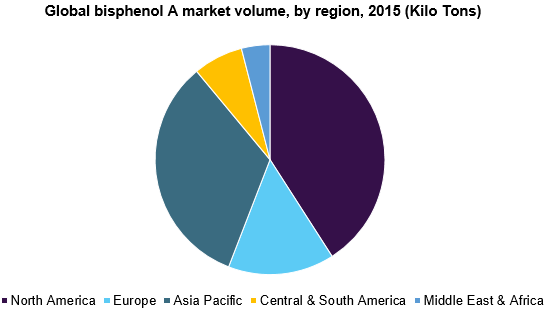 The chemical has come under extreme scrutiny in Europe as Europe Chemical Agency has classified it in the list of substances of high concern. The growth of the automotive and construction sectors will directly influence the consumption of Bisphenol A in the region. The region majorly imports the chemical from Russia & Asia.