The global blasting automation services market size was valued at USD 400.6 million in 2019 and is expected to expand at a compound annual growth rate (CAGR) of 12.8% from 2020 to 2027. The use of the latest technology to automate drilling and blasting operations allows mine owners to improve productivity and free the resources for mission-critical tasks. The unabating need for natural resources is prompting miners to carry out mining operations in challenging geographies, which is subsequently leading to higher in-ground stress. This has triggered the need to deploy more precise and technology-backed drilling and blasting operations to reduce the time spent by miners in manual processes and improve safety at mines. 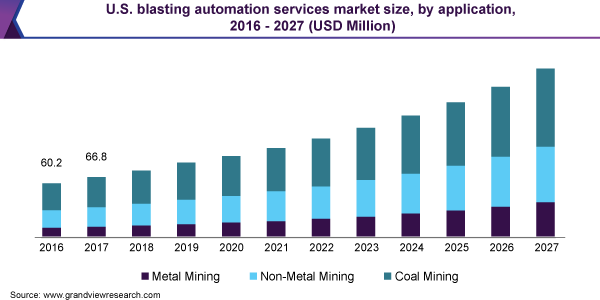 Mining companies are opting to automate the blasting processes using the latest technologies as part of the efforts to reduce mining costs and strengthen profit margins. Hence, service providers have started including detailed analysis and malicious activity alerts in their automation service portfolio for blasting operations to facilitate better management of the mining activities. Service providers, such as Maxamcorp Holding, SL, are already providing tailored services and addressing the priorities of their customers. Meanwhile, in November 2019, Orica Limited and Epiroc Rock Drills AB announced that the two companies would develop a semi-automatic explosive delivery system to ensure a more productive and safe blasting environment in mines.

The use of the latest technologies, such as the Internet of Things (IoT) and Artificial Intelligence (AI), in drilling and blasting operations is disrupting the mining landscape. The use of IoT sensors in drilling equipment is particularly gaining traction owing to the capability of these sensors to gather critical data regarding the compressive strength, velocity, density, fractures, faults, and spaces between the rocks and ores. The data obtained from the sensors is then subjected to AI and Machine Learning (ML) algorithms to obtain critical subsurface information. Several companies have started offering AI-enabled drill automation platforms to enhance aftermarket drilling operations. For instance, MineWare Pty Ltd has developed Phoenix AI, a drill automation platform based on AI, for aftermarket blast-hole drill operations.

Several laws and regulations have been drafted to enhance the safety of mine workers and curb the environmental damages stemming from mining activities. For instance, the U.S. Surface Mining Control and Reclamation Act (SMCRA), which aims to mitigate the injury and damage to people and property, encourages the deployment of more advanced blasting methods. Similarly, Ghana’s Minerals and Mining (Explosives) Regulations regulate the use, conveyance, possession, and storage of explosives for quarrying, mining, and civil works. Similar regulations have been implemented in various countries, including India, Australia, Canada, and the U.S., where mining contributes significantly to the overall national GDP. These regulations drive the adoption of modern hole deviation tools, 3-D laser profiling, and explosives-delivery system.

The metal mining segment dominated the market for blasting automation services and accounted for a revenue share of over 39.0% in 2019. This can be attributed to the unabating demand for various metals for industrial and human use and the subsequent growth in the mining of these metals. Blasting automation techniques ensure higher accuracy in long-hole drilling and blasting operations conducted at the lower depths of the crust and safe and precise extraction of metalliferous ores. The general preference for parallel-hole mining for mining metals, such as copper, in Africa, is also driving the need for automation of the drilling and blasting processes for better fragmentation, more effective drill footage, and easier setup for drill rigs. 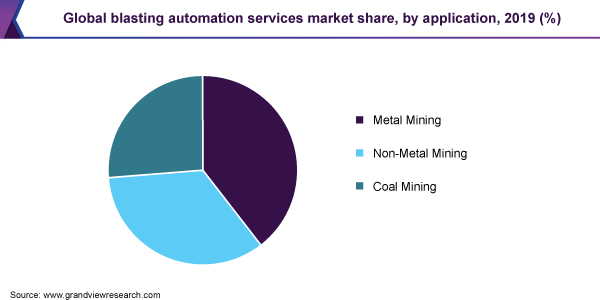 The non-metal mining segment accounted for a significant revenue share in 2019, owing to the rising demand for minerals, such as talc, barite, gypsum, pumice, and gemstones, among others. The presence of air pockets of non-metallic oxides restricts mine workers from using manual drilling and blasting processes due to the risk of exposure to toxic and inflammable gases. Drilling and blasting automation solutions can be deployed in such situations to detect the angle of slope, the density of rocks, and the quantity of explosives required for optimum results, while ensuring high precision and safety. Open-source Arduino hardware platforms are already being deployed in several mines across the world, including the Panna Diamond Mine in India, to detect the angle of surface slope and the quality of the rocks soil and automate the testing and safety of mining and accuracy of operations.

Asia Pacific dominated the blasting automation services market in 2019, with a revenue share of over 34.0%. This can be attributed to the presence of several mines in Asia Pacific countries, such as Australia, China, and India. China and Australia are particularly home to several iron, coal, and gold mines. Hence, local blasting service providers are opting to collaborate with automation service providers to offer blasting automation services to the local mines. For instance, Orica Limited implemented the WebGen wireless initiation technology in Australian mines in 2018 to help in eliminating the constraints associated with wired connections, enhancing productivity, and improving the safety standards.

In Latin America, countries such as Chile and Peru have also contributed significantly to the regional market's growth. The two countries happen to be among the major producers of copper. Continued mining of such metals in line with the growing demand is prompting mining companies to carry out mining activities in deeper mines, thereby driving the need for drilling and blasting automation solutions to save time and resources. For instance, Orica Limited partnered with Exsa SA in May 2020 to offer a new, integrated, and semi-automated manufacturing facility to Peruvian mines.

Vendors have started integrating AI and ML into their service offerings to offer better quality services to their clients. As such, vendors are now better positioned to provide more detailed and analytical data regarding the mining site, rock density, fracture points, and pressure. AI and ML are also helping in automating tasks, such as hole numbering, map positioning, and measurement of mining entities. For instance, iRing Inc. offers AI-based drill & blast planning solutions to improve the efficiency and effectiveness of the mining processes.

Vendors have also started collaborating with peers to strengthen and diversify their service offerings and improve their business operations, and eventually to cement their respective positions in the market for blasting automation services. For instance, in November 2019, ABB collaborated with its partners to offer autonomous mining robotics solutions to detect and charge blasting holes with explosives automatically. Similarly, in July 2020, Epiroc Chile collaborated with Antofagasta Minerals to automate the entire operations drill rig fleet at the Los Pelambres copper mine. Some of the prominent players in the blasting automation services market include:

This report forecasts revenue growth at global, regional, and country levels and provides an analysis of the latest industry trends in each of the sub-segments from 2016 to 2027. Grand View Research has segmented the global blasting automation services market report based on application and region:

How big is the blasting automation services market?

What is the blasting automation services market growth?

b. The Asia Pacific region dominated the global blasting automation services market with a revenue share of 34.25% in 2019. This is attributable to the presence of several mines in Asia Pacific countries, such as Australia, China, and India.

Who are the key players in the blasting automation services market?

What are the factors driving the blasting automation services market?

b. Key factors that are driving the blasting automation services market growth include the use of the latest technology to automate drilling and blasting operations and the unabating demand for various metals for industrial and human use.