The global blockchain technology market size was valued at USD 1,590.9 million in 2018 and is expected to grow at a CAGR of 69.4% from 2019 to 2025. The blockchain technology is one of the most promising upcoming technological trends in the information technology domain. It enables a ledger that can be accessed by parties involved in the transaction and can act as the universal irrefutable depository of all transactions between the involved parties. 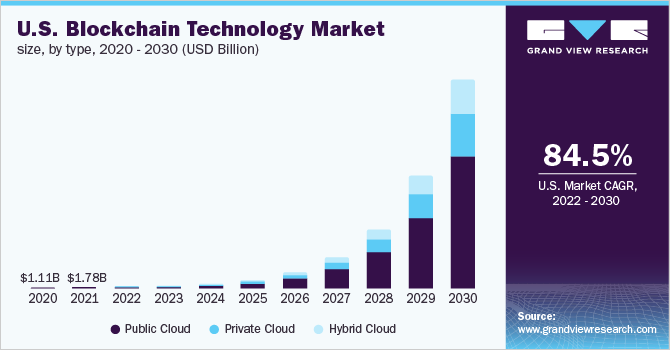 The numerous benefits involved in developing such a platform have already attracted the attention and hence, investments, from the financial sector as well as many technological giants. Not only does the technology hold the ability to disrupt the way the financial sector often works but will also have ramifications on many other industries including consumer goods, and media & telecom, among others.

An innovative requiem for all Bitcoin transactions; the blockchain technology has also incorporated other cryptocurrencies, including Litecoin, Ripple, and Mintchip. Many financial institutions and banks are developing a keen interest in the technology, owing to its unique and innovative structure with regulatory bodies, such as the International Monetary Fund (IMF) and Bank of England, which are showing considerable interest in the matter.

A wide range of players in the finance market is looking out for investment opportunities and many have made the first phase of investments to develop products and services in the industry. Though the market may be struggling with regulatory uncertainties and security concerns, the coming years are expected to witness a larger role of the concerned technology in financial transactions, spanning diverse domains and industries.

Apart from the financial sector, blockchain technology holds enormous opportunities across multiple application areas. Healthcare and public-sector applications are expected to witness enormous growth in the years to come. This is due to the fact that the implication of the technical knowledge was restricted only to the BFSI segment earlier. The actual model of blockchain is now being implemented in various core applications.

On the basis of type, the market is segmented into the public cloud, private cloud, and hybrid cloud. Public networks are the most dominant segment in the market owing to the growing tendency of the government and institutions to inculcate open and efficient transactions. For example, the Australian Securities Exchange (ASX) announced that the exchange had intentions to move Australia’s settlement and clearing systems on the blockchain platform.

The private network segment allows companies to modify rules and reverse transactions at comparatively cheaper transaction rates. These networks allow fixing of faults by manual interventions and at exceedingly high speeds. Private networks are expected to follow the public segment, albeit cautiously, and may witness a considerable rise in adoption in the coming years.

The blockchain technology tends to immensely benefit financial transactions that take place in businesses around the world by providing anonymity, openness, and efficiency by leveraging the capabilities of the internet era. The financial sector stands to benefit the most from the technology and has been a proactive partner and investor in the development from its initial stages. For instance, in September 2016, Bank of America Merrill Lynch collaborated with Microsoft Corporation to automate and digitize credit assessment process with blockchain technology. The digitalized process aimed at enhancing audit transparency and reducing counterparty risk. 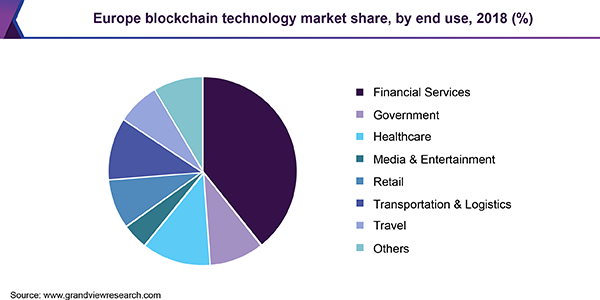 The regulatory and transactional offerings of the expertise are in alignment with the BFSI sector and will have major consequences on the domains included in the financial sector. Other industries that stand to benefit from the expertise are consumer goods, healthcare, media & telecom, public sector, and transportation.

The infrastructure & protocol providers develop core software building blocks, which are essential to deploy blockchain network. The rising demand for the blockchain protocol such as Ethereum, Hyperledger, Openchain, and BigChainDB to name a few, is a major factor that supports the growth of the infrastructure & protocol segment. The protocols help blockchain network and application developers in constructing customized distributed ledger network for the users.

The payment segment dominated the market in 2018 and was valued at USD 723.3 million. The ability of blockchain technology to provide transparency, minimize the operating cost, and improve efficiency of payment systems is instrumental in driving the demand for the payments segment. Rising adoption of these technologies into payment processes by organizations to speed up the company transaction processes is further expected to drive the growth of the payment segment.

On the basis of enterprise size, the blockchain technology market is segmented into large enterprises and Small & Medium Enterprises (SME’s). The small & medium enterprises segment is expected to emerge as the fastest-growing segment over the forecast period. The SME’s are adopting solutions powered by machine learning and Artificial Intelligence (AI) as it allows businesses to access high-quality data and insights at a low cost. This is expected to drive the growth of the small & medium enterprise segment.

The increasing adoption of blockchain technology by SMEs to enable digital services across different business channels in SME is expected to drive demand for the market in small & medium enterprise segment. Additionally, SME’s are adopting these technologies to improve their data security and to automate financial transactions.

The North American region dominated the blockchain technology market in 2018 and was valued at USD 612.3 million. This can be attributed to faster adoption of innovative technologies in developed countries such as the U.S., and Canada. The growing adoption of the blockchain technology among the verticals including BFSI, government, retail, among others for the implementation of the payment and wallet solution, digital identity detection, and smart contracts expected to drive the market growth in the region.

The growing financial sector in emerging countries such as China and India is predicted to stimulate Asia Pacific regional growth. Increasing use of blockchain technology for management of Know Your Customer (KYC) documents by banks in the region is further expected to boost growth of the market in Asia Pacific region. Furthermore, increasing government and research institute initiatives in the region for the development of blockchain technology is expected to drive the market growth in the Asia Pacific region. For instance, in June 2018, a Chinese research institute, the Chinese Academy of Sciences (CAS) announced to develop a new lab in China. The lab is developing to focus on the development of blockchain technology, advanced mathematics, and integration of big data.

The industry is characterized by a growing amount of investments in the developing technology structure and increasing collaboration among different stakeholders. For instance, in April 2016, Microsoft Corporation (U.S.) entered into a partnership with R3 consortium to gain a competitive advantage over Amazon Inc. (U.S.) and Alphabet’s Google Inc. (U.S.). Similarly, Deloitte is also leveraging the expertise for the auditing and reconciliation processes.

This report forecasts revenue growth at global, regional, and country levels and provides an analysis of the latest industry trends in each of the sub-segments from 2015 to 2025. For the purpose of this study, Grand View Research has segmented the global blockchain technology market report on the basis of type, component, application, enterprise size, end-use, and region:

How big is the blockchain technology market?

b. The global blockchain technology market size was estimated at USD 2.44 billion in 2019 and is expected to reach USD 3.84 billion in 2020.

What is the blockchain technology market growth?

Which segment accounted for the largest blockchain technology market share?

b. North America dominated the blockchain technology market with a share of 38.3% in 2019. This is attributable to the faster adoption of innovative technologies in developed countries such as the U.S., and Canada.

Who are the key companies/players in blockchain technology market?

What are the factors driving the virtual reality in blockchain technology market?

b. Key factors that are driving the blockchain technology market growth include increasing merchants accepting cryptocurrency and growing interest in blockchain among financial institutions.