The global Bone Morphogenetic Protein market size was valued at USD 504.2 million in 2015. The increasing number of people suffering from spinal injuries coupled with an increase in surgical rate are key drivers for the market. Moreover, extensive research undertaken by manufacturing companies for discovering the therapeutic potential of BMP in other orthopedic disorders, such as osteoarthritis and soft tissue repair, is anticipated to boost growth further.

Key factors contributing toward increasing number of spinal injuries include sedentary lifestyle coupled with bad posture, sport-related injuries, and increasing cases of osteoporosis. Lumbar and cervical vertebrae of the spine are highly affected areas requiring fusion in more than 65% of cases. Lumbar spinal stenosis, spondylolisthesis, and retrospondylolisthesis are the most commonly found degenerative disc disorders 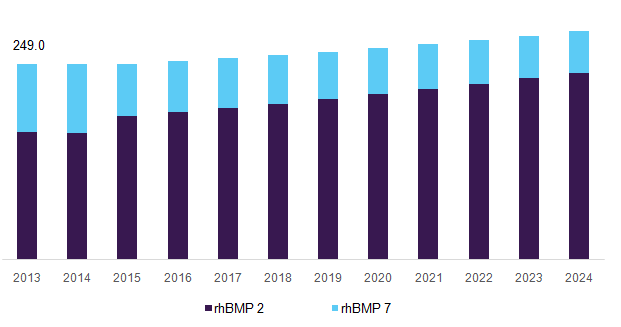 Rising geriatric population adds to increasing number of fusion procedures. Degeneration of bones and joints commonly occurs during the aging process and include degeneration of spinal vertebrae. According to data published by the Agency for Healthcare Research and Quality more than 30% of people visiting physicians for degenerative disk disorder are aged 65 years or above.

However, off-label usage of BMP, recall of some products due to reported adverse events, and limited approval from the U.S.FDA are limiting factors for the growth of the bone morphogenetic protein market.

Recombinant BMP-2 (rhBMP-2) and recombinant BMP-7 (rhBMP-7) are the BMPs approved by the U.S FDA for therapeutic use, owing to their extensive osteoinductive properties. BMPs have been reported to provide a scaffold for the regeneration of bones and cartilage at an injury site.

rhBMP-2 was first granted approval for spinal fusion in 2002. This was followed by approvals for tibia fracture/trauma, oral maxillofacial injuries, and a recent approval for additional use in spinal fusion in 2015. Due to the longstanding approval and wide range of applications mentioned above, this BMP type holds a dominant market share.

INFUSE by Medtronic is widely used rhBMP-2 ever since its approval. However, recall of a large number of units from 2010 to 2011 has resulted in a heavy decline in the revenue share of this segment from 2011. Post recall, the segment has witnessed stable growth and is estimated to witness a CAGR of around 3.0% over the forecast period.

Spinal fusion, trauma, reconstruction, and repair of oral maxillofacial bones are the key applications of BMP studied in this report. Extensive research has been carried out in academic and research institutes worldwide to discover novel therapeutic potential of BMPs, such as in dentistry and joint replacement surgery. 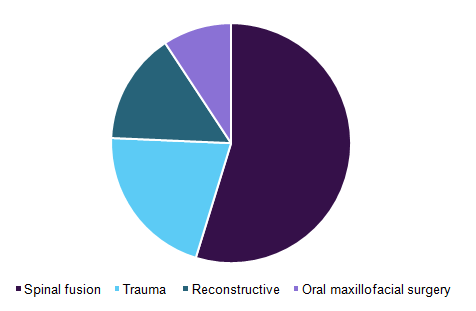 Spinal fusion held over half of the share of BMP Market in 2015. Degenerative disc disorder of the spine can be the result of a sports injury, accidental fall, or osteoporosis in the aging population. It has been reported that one in every three persons aged above 65 years in the U.S experiences a fall, every year. Moreover, the presence of favorable reimbursement policies for spine infusion procedures and increasing awareness about minimally invasive BMP procedures is anticipated to further enhance the adoption of this segment.

North America generated a revenue of over USD 340.0 million in 2015 owing to established healthcare infrastructure, high adoption of advanced technology by orthopedic surgeons, and favorable reimbursement structure in this region. This region is followed by Europe, with its increasing base of the geriatric population susceptible to bone degeneration and high R&D initiatives for the development of novel BMPs.

The fastest-growing region over the forecast period is estimated to be Asia Pacific with a share of around 6.0%. Increasing awareness among surgeons for using rhBMPs, increasing healthcare spending capacity, and growing medical tourism in countries such as India and China are factors attributing toward fastest growth

The global industry is distributed amongst major players owing to increased R&D funding by companies for clinical research of BMP and implementation of various strategies such as mergers and acquisitions. For instance, Olympus acquired the family of rhBMP-7 called OP-1 from Stryker Corporation in 2010 and then started selling it under the name of Opgenra.

Some key industry participants include Medtronic; Cellumed Co. Ltd.; R&D Systems; Sigma-Aldrich Corporation; DePuy Synthes; ProSpec; and Ember Therapeutics Inc. Of the above, INFUSE by Medtronic is the most widely used and approved BMP further leading to a high share of the company globally.

This report forecasts revenue growth at global, regional & country levels and provides an analysis of the latest trends and opportunities in each of the sub-segments from 2013 to 2024. For the purpose of this study, Grand View Research has segmented the bone morphogenetic protein market on the basis of type, application, and region: