The global brain mapping instruments market size was valued at USD 1.49 billion in 2018 and is anticipated to grow at a CAGR of 5.8%. Rising adoption of new technologies, increasing health concerns, and increasing prevalence of neurological diseases are driving the market growth. 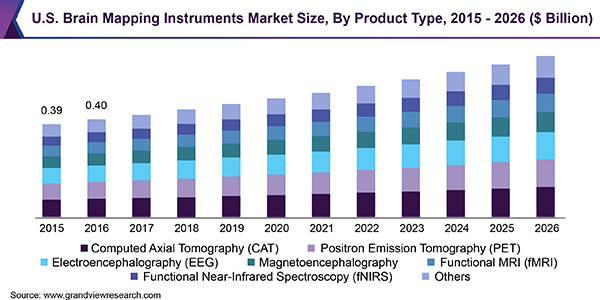 Researchers use a variety of brain mapping instruments to study the brain such as Magnetic Resonance Imaging (MRI), which is the most prominent neuroimaging technology to track the critical functioning of the brain. It tracks changes in the blood flow and oxygen levels to track brain activity. Another instrument is Electroencephalography (EEG) which records electrical waves of the brain to detect abnormal activities such as sleep disorders and seizures. The usage of these instruments helps surgeons in diagnosing and taking follow-up for the treatment of brain diseases and thus, increasing usage of these devices is driving the market growth.

The adoption of the latest technologies is primarily driving market growth. It includes Echo Planner Imaging (EPI) which is regarded as a faster MRI technique that can acquire MR images in only a fraction of a second. The use of EPI has resulted in technical advancement regarding clinical diagnoses such as the evaluation of stroke and other brain disorders. EPI offers benefits such as it can be performed by using single or multiple shots or pulse leading to the increasing demand for EPI, thus, contributing to the market’s growth.

An increasing number of patients suffering from neurological diseases is contributing to the brain mapping instruments market growth. One of the most common neurodegenerative diseases is Alzheimer’s Disease (AD) which is caused by abnormal function connectivity among the nodes of interconnected brain regions. Brain diseases include stroke, infections, trauma, and seizures. According to the U.S. Department of Health and Human Services, AD is the sixth leading cause of death in the U.S. and the most common cause of dementia among the geriatric population. Thus, increasing neurological diseases as well as improved infrastructure, and rising health concerns among different parts of the world is driving the market growth.

Computed Axial Tomography (CAT) dominated the market owing to its usage in X-ray procedures. CAT scans are basically performed to define the internal structure of the human body so that doctors can treat the patients accurately. It helps doctors to visualize small nodules and tumors that a normal X-ray cannot depict. It also generates 3D images of the internal organs of the body. Thus, its special characteristics such as painless procedures, make the machine reliable for the patient which further leads to drive the market growth.

The electroencephalography (EEG) segment is expected to grow at the highest CAGR over the forecast period owing to its features such as detecting brain disorders such as epilepsy and seizures, through diagnosing imaging techniques. It’s a diagnosing procedure that helps in determining changes in the electrical activity of the brain. Thus, due to its faster application procedure in detecting various brain disorders, it is driving the market’s growth.

North America dominated the market owing to the increasing prevalence of neurological diseases, rising adoption of technological advancements, and improved healthcare infrastructure in the U.S. Increasing prevalence of neurological diseases such as Alzheimer’s Disease (AD) is driving the market growth. According to the Michigan Alzheimer’s Disease Core Center, deaths from AD has been increased by 123%, between 2000 to 2015. AD is the most common cause of dementia among the geriatric population which causes loss of cognitive functioning such as reasoning, thinking, and remembering. It ranges from the mildest to the most severe stage due to which the patient gets completely dependent on others. Thus, increasing neurological diseases are anticipated to drive market growth. 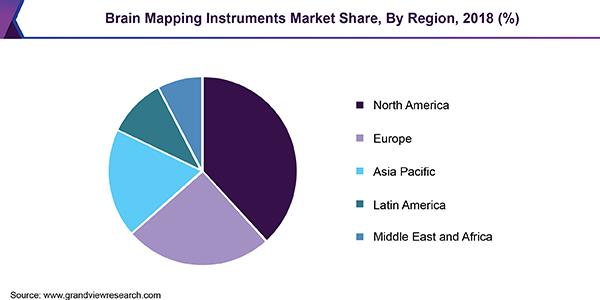 Asia Pacific is expected to grow at the highest CAGR over the forecast period due to rising health concerns and increased adoption of the latest technology. According to the NCBI, neuroimaging studies of brain anatomy and cognitive functioning have been increasing due to the rising incidence of neurological diseases in the region. New techniques have also been adopted to treat patients suffering from brain diseases such as Echo Planar Imaging (EPI). EPI is the fast MRI technique that can acquire MR images in a fraction of the time. Thus, increasing brain diseases and the adoption of the latest technology in the region have led to an increase the market growth.

Segments covered in the Report

This report forecasts revenue growth and provides an analysis on the latest trends in each of the sub-segments from 2015 to 2026. For the purpose of this study, Grand View Research has segmented the global brain mapping instruments market report on the basis of product type and region:

How big is the brain mapping instruments market?

b. The global brain mapping instruments market size was estimated at USD 1.6 billion in 2019 and is expected to reach USD 1.7 billion in 2020.

What is the brain mapping instruments market growth?

b. North America dominated the brain mapping instruments market with a share of 38.08% in 2019. This is attributable to technological advancement, and rising health concerns in the region.

Who are the key players in the brain mapping instruments market?

What are the factors driving the brain mapping instruments market?

b. Key factors that are driving the market growth include increasing incidence of neurological diseases, technological advancements, and rise in the geriatric population.