The global breast lesion localization methods market size was valued at USD 580.7 Million in 2017 and is projected to expand further at a CAGR of 13.3% during the forecast period. Breast cancer is the most prominent and invasive cancers; thus, increasing prevalence of it among women is expected to drive the market growth.

According to the Breast Cancer Organization, it was estimated that in 2018, 266,120 new cases of invasive and 63,960 cases of non-invasive breast cancer would be diagnosed. Rising number of government and non-government reimbursement policies for breast cancer diagnostics, biopsy, and other related medical procedures is estimated to boost the adoption of breast lesion localization methods. 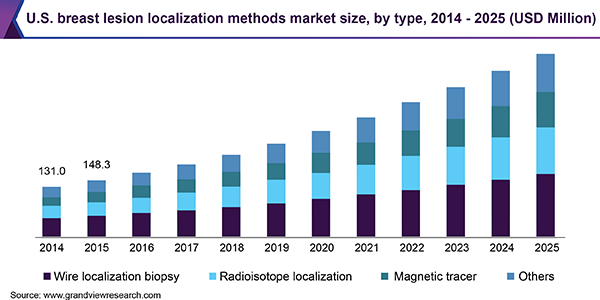 Rising demand for better healthcare infrastructure and facilities and increasing awareness level about breast cancer screening are also expected to boost the market growth. For instance, national breast cancer screening program in Australia called the Breast Screen Australia, which provides free mammogram test services every two years for women aged between 50 and 74. Developing regions, such as India and China, are also spreading awareness about early diagnosis.

In addition, introduction of technologically advanced products on the grounds of accuracy, safety, and cost-effectiveness is considered as the high impact-rendering factor for the breast lesion localization methods market. Companies, such as Endomagnetics and Cianna Inc. have developed new range of techniques respectively working on magnetic and electroradar guidance for localization of breast lesions. For instance, SAVI SCOUT localization technology of Cianna Medical, Inc. has performed over 50,000-breast tumor localization in over 375 hospitals across U.S.

Wire guided localization, also known as needle localization, led the market in 2017 with a revenue share of USD 208.4 Million. This growth was attributed to the early establishment and higher adoption of this technique among end-users. Widely used needle or wire localization devices include RPLN, Duo-System, Q-wire system, and X-Reidy breast lesion localization needles. The radioisotope segment is expected to witness a significant growth over the forecast period.

It is one of the latest techniques that are effective, safe, and widely used for preoperative localization of non-palpable, suspicious lesions. Magnetic tracer is expected to witness the fastest growth at a CAGR of 14% over the forecast period owing to the enhanced efficacy through novel mechanisms. It is used to detect early-stage non-palpable cancer. Sienna+ is one of the most popular brands in magnetic tracer used for the detection of the target cancer.

North America is the most matured regional market and accounted for 35.9% of the global industry in 2017. The presence of well-established healthcare infrastructure and key manufacturers in U.S. is projected to augment the regional growth. Technological advancements coupled with high economic development in this region are also likely to drive the market.

Furthermore, various activities by government and private firms to increase the awareness is expected to boost the region’s development. For instance, Wacoal America, Inc. organized a fund-raising activity, “Fit for the Cure”. The aim was to donate the funds to Susan G. Komen Breast Cancer Foundation and simultaneously spread breast cancer awareness in U.S. 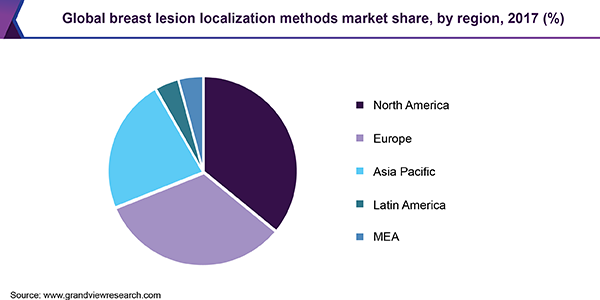 Asia Pacific is expected to register the fastest CAGR of 15.3% during the forecast period owing to rising disposable income level, high-unmet clinical needs, and increasing patient awareness regarding early diagnosis. In addition, rapidly developing healthcare infrastructure and increasing demand for breast conserving surgery are anticipated to provide potential growth platform for this region. The market is also driven by factors, such as increasing medical tourism in emerging countries of APAC.

Key companies in the market include C.R. Bard, SOMATEX Medical Technologies GmbH, Argon Medical Devices, Inc., Cianna Medical, Inc., Cook Medical, C.P. Medical, and others. These market players are focusing on business expansion in developing regions in an attempt to increase their market share. They have also undertaken several other strategies, such as M&A and product launches.

For instance, in October 2018, Cianna Medical, Inc. signed a merger agreement with Merit Medical Systems, Inc., in which the latter will provide clinical support for research and development to Cianna Medical, Inc. for commercializing new technologies in the market. In addition, in April 2017, C.R Bard with BD announced an agreement under which BD acquired Bard to create differentiated medical technology to improve the process of care and treatment of diseases for healthcare professionals and patients.

This report forecasts revenue and volume growth at global, regional, and country levels and provides an analysis of the latest industry trends in each of the sub-segments from 2014 to 2025. For the purpose of this study, Grand View Research has segmented the global breast lesion localization methods market report on the basis of type and region: