The global breast shells market size was valued at USD 71.30 million in 2021 and is expected to expand at a compound annual growth rate (CAGR) of 3.61% from 2022 to 2030. Increasing number of births worldwide is likely to surge the demand for breast shells. According to the UNICEF, around 25 million births take place in India every year. Similarly, according to an article released by the National Vital Statistics System and the CDC in May 2021, the provisional number of births in the U.S. in 2020 was 3,605,201. This was expected to increase the number of women breastfeeding their newborns. Rising number of breastfeeding women is anticipated to drive the market for breast shells. For instance, as per the CDC’s National Immunization Survey 2022, the number of women breastfeeding their child at 12 months has increased from 29.2% in 2012 to 35.9% in 2019. The following graph represents an increase in the number of breastfeeding practices in the U.S. 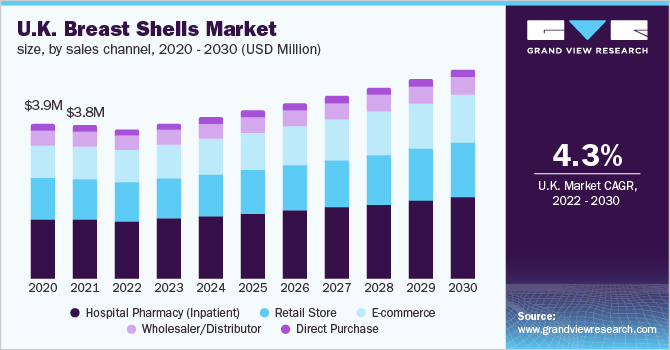 Inverted and flat nipples make it difficult for neonatal to latch on properly, which may further lead to complications such as sore nipples. The prevalence rate of inverted nipples, according to an article published by the NCBI in July 2022, was 10%-20% in the general population. Additionally, as per Flo Health, LLC, approximately around 28% - 35% of females suffer from flat nipples. As such nipples do not provide a proper latch for the baby to feed on, it irritates the skin and may cause the nipple to crack and bleed. Breast shells help in correcting flat or inverted nipples, therefore, the use of breast shells may increase over the forecast period.

The hospital pharmacy (inpatient) segment held the largest share of over 35.0% in 2021. The dominance of this segment can be attributed to the expected increase in demand for breast shells among new moms due to rising pregnancy rates around the world. Moreover, increasing births and number of hospitals worldwide are expected to drive the market. For instance, according to the American Association of Birth Centers, in the U.S., around 98.8% of births take place in a hospital setting. Births at hospital setting are considered to be low-risk, moreover, around 85% of women giving birth in hospitals are eligible for care at birth centers. Thus, many women prefer delivering at a hospital setting. In addition, due to safety concerns, people trust hospital pharmacies for such postpartum products. Therefore, there is a high level of parental trust in medical professionals, which supports the expansion of the hospital pharmacy. 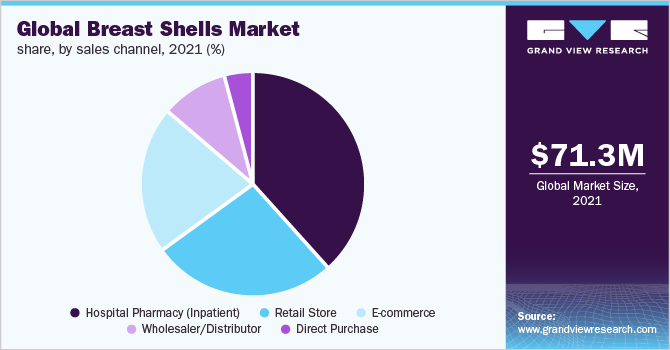 The e-commerce segment is anticipated to expand at the fastest rate of 4.44% over the forecast period. This can be accredited to a shift in the preference from retail sellers to e-commerce settings, which offer such products at low cost. The segment is projected to grow as breast shells are more widely available online through e-commerce. With the help of the e-commerce channel, customers can compare and choose the best products based on their brand, type, point of sale, and price. Some of the top online retailers that sell to consumers are Amazon, Belly Bandit, Walmart, Motherhood Maternity, and The Moms Co. These platforms use sales techniques such as buy one, get one deals, discounts, and freebies, which further draw in more customers. This is likely to foster the segment growth over the forecast period.

Moreover, constant birth in this region is expected to fuel the market growth. According to Statistics Canada, in Canada, 358,604 newborns were reported in the year 2020. Similarly, according to the Centers for Disease Control and Prevention, in 2021, the general fertility rate in the U.S. was calculated to be 56.6% per 1,000 women, which was up by 1% from 2020. Rise in the fertility rate is expected to increase the number of births in this region. Thus, growth in the number of births in this region may indirectly support the growth of the market. 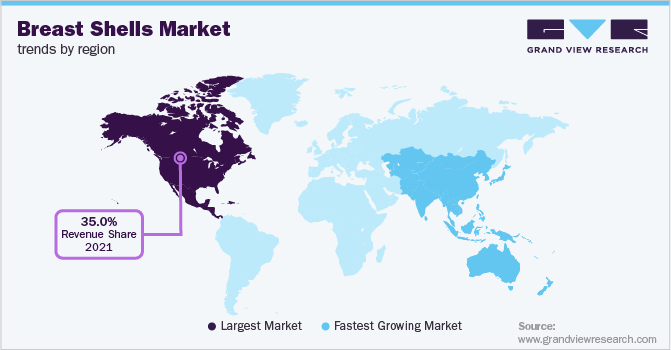 Asia Pacific is estimated to register the highest CAGR of 4.69% over the forecast period. The market is steadily increasing, offering several opportunities for the introduction of new products. Furthermore, rising birth rates in the region is can be accredited to its growth. For instance, according to Work Bank, China's birth rate climbed from 1.60 births per woman in 2000 to 1.70 births per woman in 2019, whereas, as per, The Australian Bureau of Statistics reports, in 2020, 294,369 births were reported in Australia.

Key players are adopting strategies such as awareness campaigns, partnerships, and new product launches to strengthen their foothold in the market. Many market players such as Medela and Magneto, Inc., along with Washington University are also raising awareness by providing information through magazines and conducting awareness campaigns. This is encouraging women to take over breastfeeding, thereby driving the market. However, the market is consolidated and is dominated by very few players. Some prominent players in the global breast shells market include:

This report forecasts revenue growth at the global, regional, and country levels and provides an analysis of the latest industry trends and opportunities in each of the sub-segments from 2018 to 2030. For the purpose of this study, Grand View Research has segmented the global breast shells market report on the basis of sales channel and region: 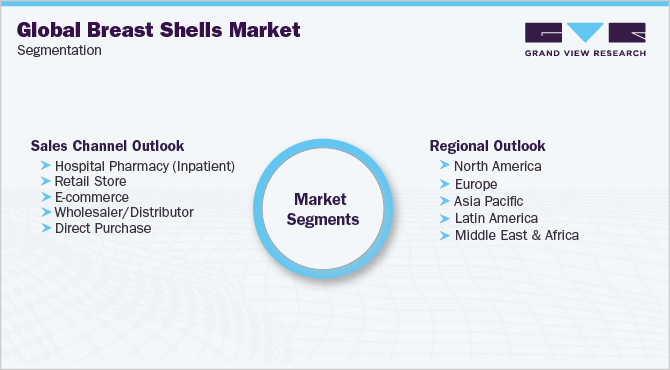 How big is the breast shells market?

What is the breast shells market growth?

Which segment accounted for the largest breast shells market share?

Who are the key players in the breast shells market?

What are the factors driving the breast shells market?