The global bromelain market size was valued at USD 26.7 million in 2016 on account of its increasing demand in end-user industries such as healthcare, meat & seafood and diet supplements sector in various countries including the U.S., China, Germany, France, South Africa, Malaysia, Indonesia and India.

The meat and seafood industry is the largest market where bromelain is consumed. It is extensively used to improve tenderness of beef, pork, chicken and squids. The U.S., Brazil, Germany, Netherlands, Australia, Spain, Canada, Poland, New Zealand and India are considered to be the major markets in this segment. 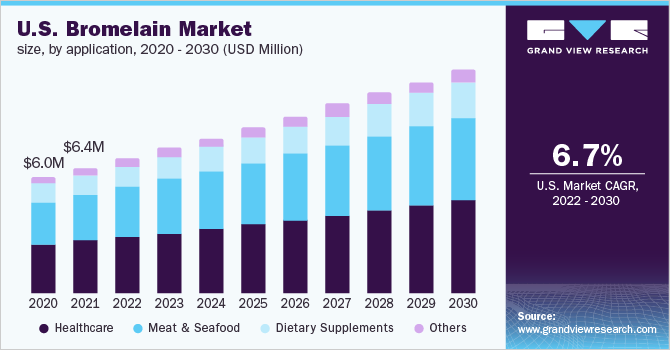 Easy availability of the product in various specifications ranging from 1000 GDU/gram to 3000 GDU/gram will augment market growth in the near future. North America has a very strong and vast customer base. The region holds a prominent market share in global healthcare industry and meat & seafood industry making it an ideal market for bromelain. The region fulfils most of its demand by imports from Thailand, India and China.

As of 2016, Europe had the second largest customer base after North America. By revenue, it was the third largest market. Demand for bromelain is expected to grow on account of growth in R&D in healthcare sector in the region.

Asia-Pacific accounted for 30.5 % of the market by volume in 2016 and is expected to reach 31.21% of total share by volume till 2025. Robust manufacturing base of bromelain in Indonesia, Thailand, China, and India along with commitment of governments towards infrastructure development is expected to increase bromelain market share of Asia-Pacific in the future.

China is expected to considerably increase its investments in natural enzyme sector owing to expansion of its end-user industries like healthcare and meat & seafood sectors. In India, rapid industrialization and improvement in FDI schemes by government will enhance growth during the forecast periodF. Low manufacturing cost and cheap labor will aid growth in its market over the forecast period.

As of 2016, Germany’s healthcare industry is considered to be the strongest within Europe`. As per U.S. Department of Commerce’s International Trade Administration, till 2015, Germany had a total of 1,996 hospitals, 2,000 medical supply stores, 21,062 pharmacies, 1,187 rehabilitation centres and 150,000 doctor’s offices. During the forecast period, growth in country’s healthcare industry will be a major accelerator to the market.

In South & Central America, growth in meat & seafood industry during forecast period is expected to be a major driving factor for bromelain market. The Brazilian food and beverage industry is investing heavily in technical development and acquiring modern machines which indicates that the industry has undergone tremendous development in recent years due to inflow of foreign direct investment (FDI).

Meat & seafood sector displayed dominance in the market in terms of market share, accounting for 56.3% of global consumption by value in 2016. The industry has witnessed tremendous growth over the past few years because of growth in food container demand globally. 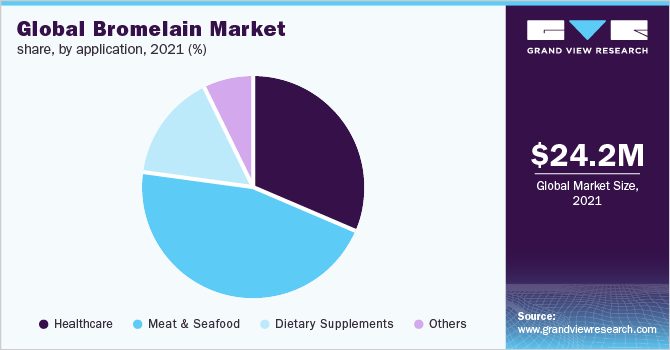 Dietary supplements and cosmetic industries use bromelain in development of capsules, tablets, gelcaps, softgels, liquids and powder. Awareness about personal health among people is an essential reason leading to growth in both of these industries, therefore augmenting growth in demand of bromelain. Some of the major companies which offer dietary supplements made using bromelain are The Vitamin Shoppe, GNC, Pure Encapsulations, NOW Foods, Americana Made, Doctor's Best, Tropical+Holistic,and Jarrow.

This industry is dominated by some key players including Enzybel International SA, Hong Mao Biochemicals Co., Ltd, and Great Food Group of Companies. Companies are continuously trying to expand their bromelain production capacity because the product has been in demand in applications like healthcare, meat & seafood, dietary supplements, cosmetics, bakery, and beverage industry. There has been tremendous growth in all of bromelain’s end user industries in the past and similar trend is expected during the forecast period because of which demand of bromelain is at rise.

Companies are increasing spending towards R&D for producing high quality bromelain. A project titled “The Methods and Compositions for Treating / Preventing Various Types of Cancer Which Comprise Administered an Effective Amount of Glyco-Polypeptides, such as Comosain, Bromelainases, Ananase, and a Mixture Thereof. By Way of (a) MMAPKinase (Major Mitogen Activiting Protein Kinase), (b) TPKinase (Tryosine Phosphorylation Kinase) Inhibitors Which Induce Cascade Production of Interleukin II B, 6, 8 & TNFs Through TCRs/ CD-2, TCRs/ CD-3 of WBC” was sponsored by Oeyama-Moto Cancer Research Foundation with an objective to use bromelain & Comosain to cure cancer in humans. Such projects in future are expected to aid bromelain manufacturers to improve on the quality of bromelain and make it more apt for healthcare industry.

Distributorship and trading in the market is expected to surge during 2017-2025 because product is mainly manufactured in Asia-Pacific countries like Indonesia and Thailand while its requirement has been more significant in North American and European countries like the U.S. and Germany.

This report forecasts volume and revenue growth at global, regional & country levels and provides an analysis on the industry trends in each of the sub-segments from 2017 to 2025. For the purpose of this study, Grand View Research has segmented the global Bromelain market on the basis of application and region: