The global bromine derivatives market size was valued at USD 3.70 billion in 2017. It is likely to expand at a CAGR of 4.3% during the forecast period. The rise in utilization of bromine in controlling mercury emissions and upsurge in demand for halogenated flame retardants has spurred the growth of the market. Flourishing end-use industries such as agriculture, pharmaceuticals, and electronics, along with growing construction activities in the Middle East and Asia Pacific, is expected to provide a boost to the growth of the market. 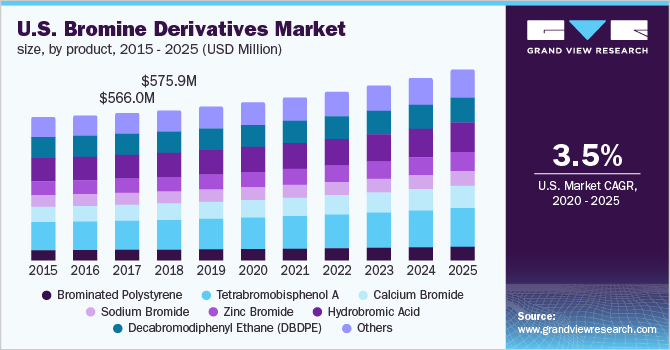 Asia Pacific emerged as one of the largest consumers of bromine derivatives by volume and the demand is estimated to grow rapidly over the forecast period. Rising consumption in China and India along with growing manufacturing activities is anticipated to drive the market during the forecast period.

Some of the major manufacturers in the market are Albemarle, Lanxess, and Israel Chemicals Ltd. The three companies accounted for over 60.0% of the market in terms of revenue in 2017. Cost competitiveness achieved by these companies along with easy access to bromine deposits has cemented their position. These companies have also established collaborations and tie-ups with suppliers to increase their regional presence.

Regulatory bodies such as the United States Environmental Protection Agency (EPA) and the European Chemicals Agency (ECHA) implemented quick and more stringent regulations to stop the usage of methyl bromide in fumigants. Increasing consumption of non-halogenated flame retardants is projected to inhibit the growth of the market.

Brominated polystyrene is manufactured by a catalysis of polystyrene with bromine. It is majorly used in the manufacturing of flame retardants. It has high thermal stability and is employed in high-temperature applications. Production of these chemicals is mainly restricted to developing countries, given the implementation of stricter regulations regarding bromine-based flame retardants in developed regions such as the U.S. and Europe. China and other Southeast Asian countries are the leading countries involved in the production of these chemicals.

Zinc bromide (ZnBr2) is a colorless salt that has many properties in common with zinc chloride (ZnCl2). It is used as a transparent shield against radiation. ZnBr2 is used as an electrolyte in zinc bromide batteries that are rechargeable. The production cost of these batteries is lower than that of other batteries as zinc is available in abundance. All the aforementioned factors are fueling the demand of ZnBr2 and the segment is poised to exhibit a CAGR of 4.7% in terms of value during the forecast period.

Sodium Bromide (NaBr) is a highly consumed inorganic high-melting white crystalline compound. It is used as a catalyst in TEMPO-mediated oxidation reactions. NaBr is chemically stable and is, thus, used with other solutions of bromides and chlorides. It is useful for the generation of chemical sensitivity. The demand for the product is slated to increase over the coming years owing to government initiatives and policies to handle concern issues and rising concerns regarding water purity.

Pharmaceutical is one of the promising applications of bromine derivatives owing to the increasing consumption of NaBr for making medicinal intermediates and as anti-epileptic drugs (AEDs) because of its anti-seizure properties. Increasing oil & gas exploration activities has been leading to extensive use of calcium bromide (CaBr) and NaBr as drilling fluid for the extraction of petroleum products, which is augmenting the overall bromine derivatives market.

Biocides are substances that kill microorganisms and are used to extend shelf life and maintain the quality of different products including cosmetics, coatings & dyes, glues & sealers, wood & paper, and cleaning materials. Several disinfectants are halogen-based. Aqueous solutions of halogens are disinfectants that effectively destroy the growth of microbes. 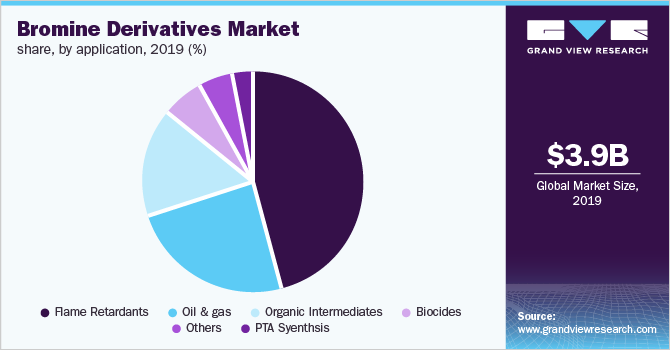 North America accounted for a significant share in the market in 2017. The region is one of the crucial producers of natural gas and has also been observing steady growth in the production of shale gas, which in turn is escalating the growth of the market. Another key factor stoking the growth of the market in North America is sizable foreign investments made by multinational companies. For instance, in July 2018, Lanxess announced multiple project expansion plans across the region by 2022, which also includes an investment of USD 60 million in the global bromine reservoir site.

Asia Pacific is likely to represent over half of the overall revenue by 2025. It is also expected to be the fastest-growing region in terms of value as well as volume during the forecast. Multiple companies have full-scale operations in Asia Pacific and few companies such as Tosoh Corporation and Lanxess invest heavily in research & development activities that have led to improved product quality in the region.

The market in Central & South America is estimated to progress at a better rate compared to North America and Europe. The region approves limited utilization of flame retardants such as brominated polystyrene. However, the application of methyl bromide is restricted to agricultural purposes, majorly for the cultivation of vegetables, strawberries, and certain flowers.

The major bromine derivatives manufactured worldwide are metal derivatives such as ZnBr2 and NaBr as well as other products including Hydrobromic acid and CaBr. Hydrobromic acid is anticipated to witness an increase in demand as it is an important material required for the manufacturing of metal-based bromides. Increasing applications in industries such as oil & gas drilling, water treatment, mercury control, food safety, and increasing utilization as precursors in the manufacture of specialty chemicals such as bromide salts and tertiary amines.

In May 2014, Tosoh Corporation merged with Nippon Polyurethane Industry Co., Ltd., a manufacturer and seller of PU raw materials. This merger was strategically done to sustain the isocyanates business, as the market will remain highly competitive in the future.

Furthermore, in February 2016, Israel Chemicals Limited and Albemarle Corporation entered into a definitive long-term agreement to supply polymeric flame retardants globally. These products are marketed by Albemarle under GreenCrest brand and by ICL under FR122P brand.

This report forecasts revenue growth at global, regional, and country levels and provides an analysis of industry trends in each of the sub-segments from 2014 to 2025. For the purpose of this study, Grand View Research has segmented the global bromine derivatives market report on the basis of product, application, and region:

How big is the bromine derivatives market?

What is the bromine derivatives market growth?

Which segment accounted for the largest bromine derivatives market share?

b. Asia Pacific dominated the bromine derivatives market with a share of over 50.0% in 2019. This is attributable to growing manufacturing activities in China, India, and South East Asia.

Who are the key players in bromine derivatives market?

What are the factors driving the bromine derivatives market?

b. Key factors that are driving the market growth include rising utilization of bromine for controlling mercury emissions and increasingdemand for halogenated flame retardants.