The global flame retardant market size was valued at USD 7.0 billion in 2019 and is expected to grow at a compound annual growth rate (CAGR) of 3.6% from 2020 to 2027. The market is driven by increasing demand for fire retardant material from various end-use industries, such as construction, textiles, electrical and electronics, and transportation. Growing awareness among consumers regarding crucial escape time during fire incidents, effectiveness of flame retardants, and their advantages are expected to drive the demand for fire-resistant material. Moreover, fire safety standards and regulations formulated across the globe are expected to have a positive impact on product demand. 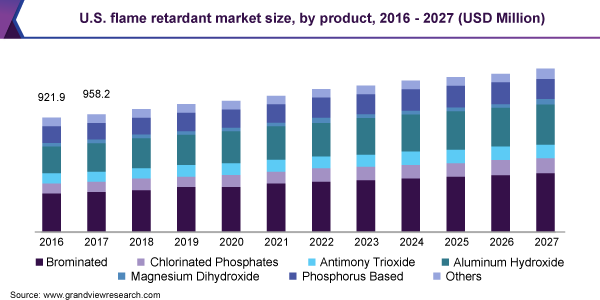 Flame retardants cover a broad range of chemicals, which prevent the spread of fire and increase the escape time by delaying it. Increasing incidences of fire accidents have created the demand for material with flame-retarding properties. Fire safety standard improvement, specifically for aluminum composite panel cladding that is used in buildings, has created the product demand in construction.

The market growth is significantly restrained by the negative and harmful effects of the chemicals used in flame retardants. Consequently, certain products such as brominated compound - hexabromocyclododecane (HBCD) are banned in Canada, European Union, and Japan. This has driven the market towards the development of replacements of such products, with successful innovation of HBCD replacement by players, including The Dow Chemical Company, LANXESS AG, and Albemarle.

Furthermore, the spread of COVID-19 across countries, including the U.S., China, Iran, Italy, France, and the U.K., among some of the worst-hit economies has led to the supply chain disruptions, trade halts, and industrial shutdowns, along with the halt in sales of non-essentials. This is further expected to decline market growth in 2020. However, the decline is likely to stop once the economies and industries resume their operations after lockdowns.

In the halogenated product segment, brominated accounted for the largest revenue share of 37.2% in 2019. In the non-halogenated product segment, aluminum hydroxide accounted for a dominant share of 39.4% in 2019 in terms of volume. Increasing concerns over material health and safety in several industries, specifically in U.S. and mature economies of Western Europe, coupled with low-cost advantages involved in the manufacturing of aluminum hydroxide flame retardants, are expected to fuel the growth of the aluminum hydroxide segment over the forecast period.

Followed by aluminum hydroxide, halogenated flame retardants held a significant revenue share. These comprise chlorinated and brominated products that are commonly used together with the synergistic effect of antimony trioxide. Halogenated flame retardants, such as brominated, have been reported to be highly toxic and are also linked with human disorders/diseases, such as reduced fertility, advanced puberty, low IQ, delayed mental and physical development, memory and learning problems, and thyroid disruption. Some flame retardants can also result in fatal diseases, such as cancer.

Due to the environmentally disruptive nature of halogen compounds and growing concerns of bioaccumulation and environment contaminations, laws concerning environment have been formed. Restriction of Hazardous Substances Directive (RoHS) restricts the usage of hazardous substances, such as halogenated flame retardants, in electronics and electrical equipment. Waste Electrical and Electronic Equipment Directive (WEEE) is concerned with the waste electronic and electrical material, which discourages the use of halogenated flame retardants. Such initiatives in support of regional governments are likely to accelerate the growth of non-halogenated products in the near future.

The electrical and electronics industry held the largest revenue share of 40.5% in 2019 and is expected to witness the fastest growth over the forecast period. The usage of flame-retardants is widespread in this industry and its degree is dependent on product function, materials, and the fire resistance level needed to be achieved. Plastic components are highly used in this industry in components ranging from USB hubs to insulated cables. This extensive usage increases fire risks. To reduce the risks, flame retardant additives are used in the industry to meet the prescribed laws and regulations. Rising literacy rate, disposable income, and standard of living across the globe, especially in the developing regions, such as Asia Pacific, have boosted the growth of the electrical and electronics industry. This growth trend has benefitted the market in the recent past and is expected to continue to do so over the forecast period.

The construction and building industry emerged as one of the dominant end-use industries of the product. Growing population, coupled with rapid urbanization and increasing government initiatives in the emerging countries, has assisted the growth of the construction sector. In addition, large scale investment in infrastructure projects will be an added advantage for the growth in developing regions, such as Middle East and Africa.

Transportation comprising automotive as well as automotive spare parts is another prominent end-use segment of the product. As automotive space is constricted, smoke emitted by components is a cause of concern. To address these issues, the automotive industry has witnessed increased usage of flame retardants. Preference for flame retardant polymers is increasing due to their lightweight and effectiveness in curbing fire spread.

Polyolefin is expected to witness the fastest growth over the forecast period. Polyolefins find widespread application in the construction and electrical and electronic industries. Polyolefins are flammable, but they are reported to have a high loading capacity of flame retardance. All these beneficial properties are expected to contribute to the growth of the segment over the forecast period. 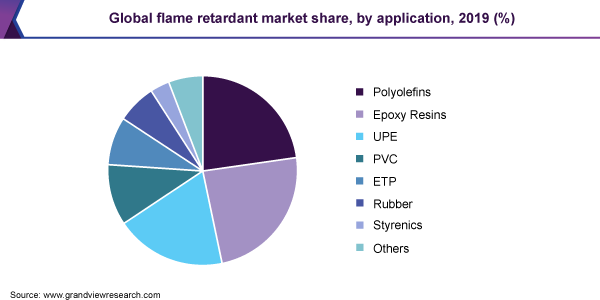 R&D innovations and technological advancement driving the introduction of new products with enhanced performance and efficiency are likely to trigger the market growth in the near future. For instance, development of environment-friendly fire-resistance epoxy resins with high efficiency has driven the market towards sustainability. In the past few years, manufacturing industries have been moving out of Japan and consequently, the consumption of products for applications, including epoxy resins, polyurethane resins, and polyester resins, has decreased in Japan, unlike other Asian countries.

Asia Pacific held the largest revenue share of 50.7% in 2019 and is expected to witness the fastest growth over the forecast period. Asia Pacific is expected to gain higher revenues from China and India over the forecast period owing to significant growth in the consumption of resins across both the economies. Furthermore, in an attempt to match the safety standards of North America or Europe, the manufacturers in Asia Pacific are significantly focusing on production of environment-friendly flame retardant products as a significant share of the products are also exported to international countries.

Increase in transportation and industrial activities in Asia Pacific, coupled with other factors such as cheap raw materials and low labor costs, is fueling the regional market growth. Moreover, growing inclination of key mining players towards expansion due to large mineral resources of the region and utilization of flame retardants for producing uniforms of workers in mines are driving the demand in India, China, Japan, and Australia.

Consumption in Europe is expected to be primarily driven by fire safety regulations. According to the Flame Retardants Europe (FRE), technological advancements in Europe, coupled with expanding application scope of flame retardants, have pushed key manufactures to ensure fire safety. Several technical fire safety standards developed by various governments exist across Europe. The General Product Safety Directive (GPSD) establishes specific properties to products that are placed in the consumer market. However, fire safety regulations are monitored by individual states. The U.K. has the highest level of fire safety standards in the world. Consequently, the country has successfully reduced the number of fire deaths by over two-thirds in the past 25 years.

Flame retardant manufacturing is highly dependent on the availability and favorable costs of raw materials. In the market, successful commercialization of pioneering products, such as metal-based flame retardants, and investments in production capacity are some of the key factors for the market players. Companies are trying to provide sustainable and environmentally safe products by complying with directives, such as WEEE, REACH, and eco-labels. Halogen-free flame retardants qualify for usage according to these directives and thus are being significantly adopted by the end users.

Large multinational corporations such as Nabaltec AG are some of the major suppliers of nitrogen, phosphorus, and aluminum. The market value chain is moving toward higher degree of integration across the value chain to optimize supply chain efficiency and maximize profit returns. The manufacturers are also focused on establishing long-term supply contracts with distributors/suppliers to ensure continuous supply of their products. Manufacturers can sell their products either directly or through distribution channels. Some of the prominent players in the global flame retardant market are:

This report forecasts volume and revenue growth at the global, regional, and country levels and provides an analysis of the latest industry trends and opportunities in each of the sub-segments from 2016 to 2027. For the purpose of this study, Grand View Research has segmented the global flame retardant market report on the basis of product, application, end use, and region:

How big is the flame retardant market?

What is the flame retardant market growth?

Which segment accounted for the largest flame retardant market share?

b. Asia Pacific dominated the flame retardant market with a share of 50.7% in 2019. This is attributable to favorable government regulations aimed at prevention of fire hazards

Who are the key players in flame retardant market?

What are the factors driving the flame retardant market?

b. Key factors that are driving the market growth include stringent regulations across regions that mandates the use of flame retardants across prominent end use industries including construction, electronics, textile, automotive.