The global building-integrated photovoltaics market size was valued at USD 16.62 billion in 2021 and is expected to expand at a compound annual growth rate (CAGR) of 20.5% from 2022 to 2030. The rapid expansion of the solar photovoltaic (PV) installation capacities of different countries, coupled with increasing demand for renewable energy sources, is expected to drive the growth of the market across the world. Increased awareness for energy security and self-sufficiency and favorable government legislations, coupled with the unilateral obligation of countries such as Germany, Italy, France, the U.K., the U.S., China, Japan, and India to the Kyoto Protocol, designated to reduce greenhouse gas (GHG) emissions, are also expected to promote the growth of the market in the coming years. 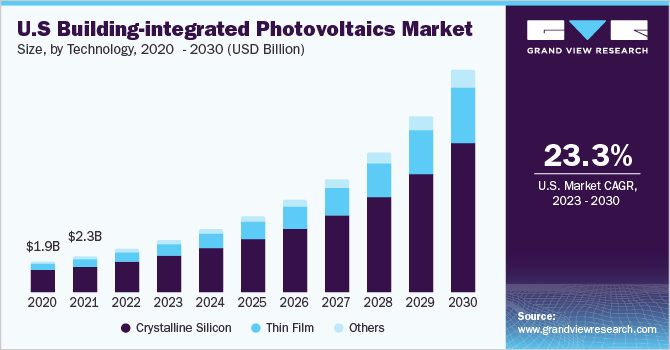 The presence of a consumer base with high disposable income levels and the increasing affinity toward integrated installations in residential and commercial buildings in the country are anticipated to boost the demand for the product over the forecast period. In addition, the growing innovation in the domain is projected to increase the operational efficiency of the product, translating into market growth. The BIPV market in the U.S. is likely to be driven by the growing demand for alternate sources of energy. The demand for building-integrated photovoltaics is likely to be fueled by the high need for integrated roof systems in commercial and industrial establishments. Improvements in the manufacturing technology of thin-film BIPV modules and the rising efficiency of the product are expected to drive the market over the forecast period.

Based on technology type, the global market has been further divided into Crystalline Silicon, Thin film, and others. The crystalline silicon segment led the market and accounted for 71.02% of the global revenue share in 2021. Crystalline silicon cells can be integrated into building roofs by using smart mounting systems, which replace the sections of the roof while keeping its integrity intact. This type of integration does not account for large investments and provides high efficiency. Another option for integration is the replacement of roof tiles with crystalline silicon cells. In addition, the market witnesses the use of anti-reflective coatings, which aid the capture of solar energy and provide superior efficiency. Crystalline silicon has the highest energy conversion efficiency at present; commercial modules typically convert 13%-21% of the incident sunlight into electricity.

The thin film held a share of 22.05% in the global BIPV market in 2021. The thin-film BIPV market is expected to witness sustained growth over the forecast period due to rapid technological advancements leading to the introduction of advanced products. Thin-film BIPVs are readily used in case of considerable weight constraints for the building. In such cases, the building envelope is unable to support the weight of crystalline silicon integration, leading to high demand for thin-film integrated installation. Thin film is advantageous as it can be used for curved surfaces owing to its superior flexibility

Other technology segment includes advanced integrated photovoltaic manufacturing technologies such as dye-sensitized cells (DSC) and organic photovoltaics (BIOPV). The demand is expected to be driven by the superior energy bandgap of organic photovoltaics. Rapid technological advancements have led to a significant increase in the efficiency of organic PVs, which is anticipated to boost their demand over the forecast period.

The roof installation segment led the market and accounted for the largest revenue share of more than 61.46% in 2021. The roof segment will maintain its lead throughout the forecast period. Photovoltaics integrated with building roofs are known to exhibit efficiency due to improved incidence of light on the roof surface. The segment accounted for the highest market share in 2021 owing to the higher strength and improved aesthetic appeal of integrated roofs and skylights. The demand for building integrated roofs is expected to increase over the forecast period due to the development of superior products.

BIPV facades experience high demand, primarily in the developed economies that have a well-established electricity distribution system. The demand for the integration of photovoltaics with facades is driven by their increasing installation in the commercial sector. Glass integrations are expected to grow on account of the high transparency of integrated systems coupled with superior integration of glass and BIPV cells. The development of photovoltaic materials with high absorption is expected to propel the product demand over the forecast period. 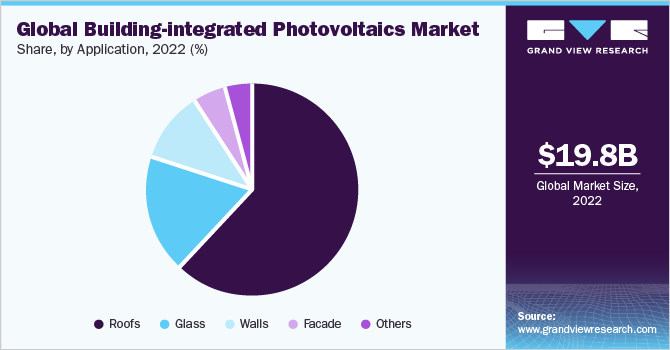 The others application segment includes shading and membranes. The demand for such products is high in residential installations due to the development of lightweight materials for use on uneven surfaces. The installations do not generally use crystalline silicon photovoltaic modules, as the structure is incapable of supporting heavyweight.

The industrial segment led the market in 2021 and accounted for 40.13% market share. The demand for building-integrated photovoltaics in industrial applications is expected to be fueled by their growing usage to reduce reliance on non-renewable energy sources. The segment is anticipated to expand in the wake of increasing adoption in the European region. In addition, companies in developed economies in Europe exhibit an increased tendency toward the use of integrated photovoltaics in a bid to improve the aesthetic appeal of buildings.

The demand for building-integrated photovoltaics in the residential sector is expected to be driven over the forecast period owing to increasing awareness regarding the use of renewable sources of energy for electricity generation among consumers. However, the high cost of integration of photovoltaics into the building envelope is expected to act as a restraint for the market growth over the forecast period.

Europe dominated the global market in 2021 and accounted for the largest revenue share of over 37.68%. A favorable outlook toward renewable energy coupled with consumer awareness for the same in European countries is likely to drive the market for BIPV over the forecast period. Germany and Italy are increasingly emphasizing the use of solar energy, which is expected to translate into higher adoption of BIPV, thus promoting industry growth over the forecast period.

The demand for building-integrated photovoltaics in the North American region is anticipated to grow on account of the rising adoption of aesthetically appealing solar energy-harnessing systems. In addition, the high disposable incomes of consumers in the region, primarily the U.S. and Canada, and the advances in the production technologies of BIPV solar panels are likely to lead to an increased demand for the product over the next seven years.

The burgeoning building & construction industry in the central and south American region is estimated to drive the market over the forecast period. In addition, the demand for BIPV systems in the region is predicted to increase due to their application in the industrial and commercial sectors. Furthermore, the market in CSA, primarily in Brazil and Argentina, witnesses high potential due to the increased installation of solar energy-harnessing systems.

BIPV manufacturers have been implementing various strategies such as new product developments, partnerships, joint ventures, agreements, and collaborations, among others, to maximize their market penetration and to cater to the changing requirements of the architects and construction contractors. For instance, Hanergy Thin Film Power Group partnered with CSR Group to launch thin film flat SOLARtile, which is used as a roof application in building photovoltaics. First Solar, Inc. announced to invest USD 684 million in a new, fully vertically integrated photovoltaic (PV) thin-film solar module manufacturing facility in Tamil Nadu, India. Some of the prominent players operating in the global building-integrated photovoltaics market include

This report forecasts revenue growth at global, regional, and country levels and provides an analysis of the latest industry trends in each of the sub-segments from 2019 to 2030. For this study, Grand View Research has segmented the global BIPV market based on technology, application, system, and region

How big is the building-integrated photovoltaics market?

What is the building-integrated photovoltaics market growth?

Which segment accounted for the largest building-integrated photovoltaics market share?

b. The crystalline silicon segment occupied the largest BIPV market share of 71.02% in 2021 owing to the conventional use of these C-Si modules in photovoltaic energy installations. Growing demand for integrated modules with enhanced efficiency is bound to provide a major boost to segment growth.

Who are the key players in the building-integrated photovoltaics market?

What are the factors driving the building-integrated photovoltaics market?