The global business jet market size was valued at USD 23.57 billion with an estimated 703 jets delivered in 2018. The market is expected expand at a CAGR of over 3% over the forecast period. Factors such as continuous wealth creation in mature markets as well as the rising penetration of business aviation in emerging economies are anticipated to drive the growth. The advent of new and technologically advanced aircraft models is expected to further fuel the growth. Emerging economies across the globe are expected to witness an increased demand for business jets owing to converging adoption towards mature market levels. The industry players are introducing new business models, for instance, fractional ownership, which offers full aircraft ownership to the customers, thereby driving the overall demand.

The market for business jets is highly competitive in nature with a few players acquiring a significant market share. Although a few prominent players dominate the industry, the influx of new startups focusing on the development of light jets is projected to influence the market positively. Commercialization of urban air mobility has resulted in an increasing demand for the jets, used for inter and intra-city travel. They are also used by government officials, public authorities, and armed forces for numerous tasks including travel, express parcel deliveries, and casualty evacuation. 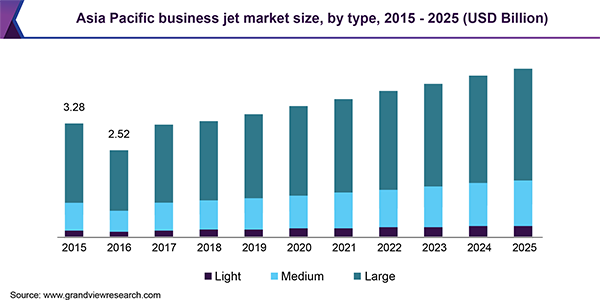 Rising popularity of long-range aircraft in the aviation industry is another factor driving the business jet market. These jets offer optimum comfort, economy, and performance, thereby witnessing an increased demand. Moreover, a surge in the number of high or ultra-high-net-worth individuals, especially in North America, Europe, and Asia Pacific, is anticipated to contribute significantly to the revenue generation during the forthcoming years. Operators in the fractional ownership and branded charters arena are experiencing increased fleet retirement, which is compelling them to replace their existing jets with new ones, consequently accelerating the market growth.

As airline travel is becoming tedious and stressful due to a tremendous increase in the number of travelers, a large number of individuals are preferring business aviation for convenience, privacy, and comfort. Such increased demand is expected to affect the supply as well as the cost. In response to this growing demand, various business jet operators are expanding their portfolio of membership programs, including member plans, preferred charter accounts, and private jet cards. These membership accounts offer reduced rates, additional fleet options, and negligible blackout dates.

The light segment represented more than 43% of the deliveries in 2018. The jets in this category are characterized by relatively lower operating costs and purchase price, along with adequate range for short-haul missions. Moreover, the introduction of various new and versatile models is stimulating the demand as well as replacement purchase decisions, thereby accelerating the growth.

The large segment is expected to witness a CAGR of approximately 5% over the forecast period and emerge as the fastest growing segment from 2019 to 2025. These aircraft offer numerous benefits, such as cabin comfort, speed, and range, driving the demand. Also, several manufacturers, including Bombardier, Dassault Aviation, and Gulfstream have added large business jets in their portfolio in recent years owing to their benefits. The newer models of large business jets are suitable for a longer flight time as well as can deliver unprecedented performance and flexibility. This factor is anticipated to drive the segment growth till 2025.

Business aircraft ownership generated highest revenue and was valued at more than USD 13.billion in 2018. Ownership is characterized by two models, which include fractional and full ownership. Full ownership has been the choice of the travelers over the past decade, supporting its revenue generation. On the other hand, fractional ownership is anticipated to emerge as the fastest growing ownership model from 2019 to 2025. This model has subsequent variations, for instance, the fractional card programs, wherein the customers get an on-demand access to a private jet by predetermining the number of flights in a year, without any obligation to purchase shares in an aircraft.

The global market for on-demand business jet services is anticipated to exhibit the highest CAGR over the forecast period. These services are sub-divided into three business models, namely air taxis, branded charters, and jet card programs. There has been a steady increase in the number of branded charter operators across the industry. These operators offer on-demand flight access along with competitive trip-specific pricing. 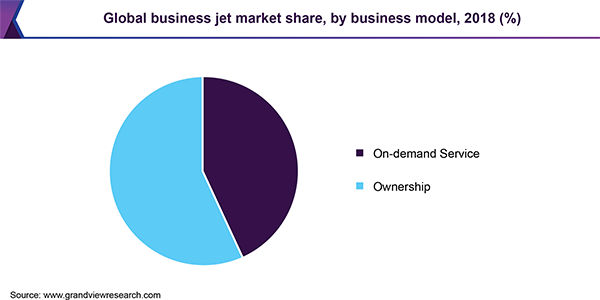 Also, these operators are characterized by the adoption of sophisticated infrastructure for carrying out the operations as well as implementation of airline-style scheduling practices for minimizing deadhead costs. The prominent operators in the branded charter arena, such as NetJets, Flexjet, Comlux, and VistaJet, are focusing on renewing their aircraft fleet. Such expansions are expected to create demand for new and cost effective flight options, thereby driving the growth of overall market during the forecast period.

North America dominated the business jet market with over 55% revenue share in 2018 and is expected to maintain its dominance over the next six years. The region has been the hub of business aviation over the past few decades owing to the continuous economic growth, especially in U.S. Moreover, continuous rise in demand for new and replacement aircraft is projected to accelerating the sales in the region. The regional business aviation network, including manufacturers, suppliers, dedicated airports, and Fixed Base Operators (FBOs) witnessed rapid expansion, making it one of the most lucrative regions for business aviation across the globe.

Middle East and Africa is expected to register the fastest CAGR of more than 6% over the next six years, primarily owing to rising investments for the development and modernization of aviation infrastructure. Factors such as longer distances between the cities as well as deficient ground transportation network in the region are driving the need for large and medium business jets. Rising number of high net worth individuals, especially in the Middle Eastern countries, is gradually turning the market into a lucrative one, for both aircraft OEMs as well as operators.

Bombardier Inc.; Dassault Aviation; Textron Inc.; Airbus SE; The Boeing Company; and Gulfstream are among the key market players. The market is highly competitive with a few players acquiring the significant market share. With continuous product innovations and technological advancements, the small and mid-sized companies are trying to strengthen their presence by capturing untapped markets and securing new contracts. For instance, in February 2018, Pilatus formally began with the first out of six deliveries of the PC-24 to the fractional ownership provider, PlaneSense. Similarly, Honda Aircraft Company announced the launch of its Honda HA-420, with its first delivery in 2016. The company built more than 90 aircraft by the end of 2018.

This report forecasts revenue growth at the global, regional, and country levels and provides an analysis of the latest industry trends in each of the sub-segments from 2015 to 2025. For the purpose of this study, Grand View Research has segmented the global business jet market report on the basis of type, business model, and region:

How big is the business jet market?

What is the business jet market growth?

Which segment accounted for the largest business jet market share?

b. North America dominated the business jet market with a share of 54.5% in 2019. This is attributable to the continuous rise in demand for new and replacement aircraft is projected to accelerating the sales in the region

Who are the key companies/players in business jet market?