The global camping cooler market size was valued at USD 735.4 million in 2019 and is expected to register a compound annual growth rate (CAGR) of 6.1% from 2020 to 2025. The growing popularity of outdoor recreational activities such as off-roading and hiking among travelers is a leading factor driving the market. In addition, better technologies used for manufacturing lightweight chillers that can retain ice for a longer duration will contribute to market growth over the coming years. 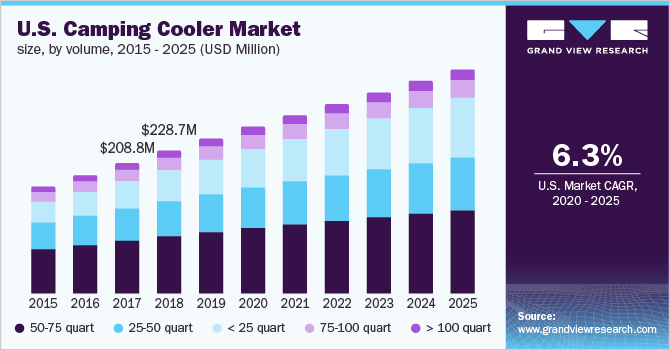 In North America, there has been a significant rise in consumers taking road trips in summers, which boosts sales of outdoor chillers. Decreasing fuel prices in the U.S. have resulted in a number of consumers seeking off-road activities. The importance of a camping cooler box has increased owing to factors such as a shift in consumer mindset toward spending on road trips and adventure vacations.

Major vendors in the market, such as Pelican Products, Inc.; Igloo Products Corp.; Grizzly Coolers; ORCA Coolers; and Bison Coolers, are based in the U.S. These companies are emphasizing on expanding their product portfolio by launching chillers with improved technologies and unique features, such as dry ice compatibility, seamless rotationally-molded construction, and use of rip-stop polyester fabric for developing folding and collapsible travel chillers.

Camping and outdoor cooler suppliers are focusing on developing products based on the changing consumer trends. The suppliers offshore the manufacturing of cooler chests to a low-cost manufacturing destination such as China, the Philippines, Japan, or India. However, there has been an evident shift in the trend as suppliers are observed partnering with raw material manufacturers in onshore locations in order to meet the excess demand from users.

Developments in camping equipment have enabled manufacturers to replace outdated equipment with newer models. Some developments include MPOWERED Luci, a solar charged lantern producing up to 80 lumens of light for 15 square feet area; Sawyer Squeeze Water Filter System, which filters water by filling the water bag and squeezing the water out through the filter attached to the bag; Powertraveller Powermonkey Extreme, which is a rugged, waterproof, and portable solar charger; and Yeti Tundra 35 coolers featuring T-Rex lid latches, which are heavy-duty rubber latches made with patented technology, AnchorPoint tie-down slots, and NeverFail hinge system having two hinge pins and an interlocking design. These technologically advanced camping equipment models are expected to boost the demand for newer products.

By volume, the market is segmented into <25 quarts, 25-50 quarts, 50-75 quarts, 75-100 quarts, and >100 quarts. The 50-75 quarts segment accounted for the largest market share of around 40.0% in 2017 and is expected to dominate the overall market throughout the forecast period. Manufacturers are continuously stressing on launching new products with distinct features. For instance, in December 2015, Pelican Products, Inc. launched its Pelican 55 quarts tailgater cooler, equipped with a bottle opener, an integrated dual-lid, polymer exterior wall, and built-in trays to keep food dry and cold.

Consumer demand for <25 quarts chillers is expected to increase significantly over the forecast period as these are compact, lightweight, and are available in soft as well as hard product variants. Soft iceboxes are compact and are available in sling and backpack styles. Thus, they are very convenient to carry as compared to large-sized hard coolers.

By product, the camping cooler market has been segmented into hard, soft, and others. Hard coolers are expected to emerge as the dominant segment over the forecast period. In 2017, it accounted for 64.3% of the overall revenue, which is attributed to the rising demand for hard chillers in the North American and European regions. Outdoor recreational activities are considered a prominent contributor to the growth of this segment.

Adoption of soft chillers is growing at a rapid pace owing to several benefits such as its low price and lightweight structure as compared to hard iceboxes. Availability of soft coolers in different variants, including lunch boxes, shoulder bags, and backpacks, is expected to boost its sales over the forecast period.

The others segment includes small coolers and personal drinkware and is anticipated to witness substantial growth over the forecast period, which is attributed to the adoption of high-quality drinkware by youngsters during camping and adventurous activities. In May 2017, Igloo Products Corp. launched a new hydration line of stainless products, including drinkware. The hydration line comprises sporting goods, outdoor, and houseware categories. Special features in the hydration range of products include vacuum insulation, dual-walled Tritan technology, and superior foam insulation.

By application, the market has been segmented into dry camping, backpacking, off-road/ RV camping, and others. The dry camping segment accounted for the largest revenue share of over 40.0% in 2017 and is expected to dominate the overall market throughout the forecast period. The popularity of off-roading is also increasing substantially, especially in developed countries where heavy engine cars designed for off-roading are more in demand. 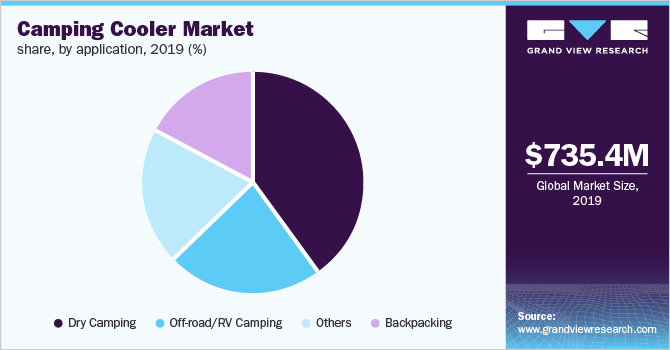 Adoption of camping and outdoor chillers in the North American and European regions is significantly higher than in developing regions. Camping is one of the most popular summer activities in Iceland. A large number of Irish vendors offer rental services for essential equipment for hiking trips, which is anticipated to drive the market.

In North America, national parks and forests, such as the Congaree National Park, Ocala National Forest, and Bankhead National Forest, are popular destinations for dry camping. Rising footfall of travelers to these locations is projected to significantly boost demand for chillers in the region. With increasing number of travelers opting for solo hiking and trekking trips, demand for compact soft chillers and drinkware is expected to be on a rise. The segment is projected to grow at a faster rate as compared to the hard chillers segment.

By 2025, North America is expected to account for around 40% of the overall revenue. The U.S. is the largest market owing to continuous increase in the number of travelers opting for hiking and recreational activities. As most manufacturers of chillers and associated products are based in the U.S., marketing and selling them within the country is easier as compared to marketing brands at other locations. Familiarity of consumers with known chiller brands is a factor driving the U.S. market.

According to the Bureau of Economic Analysis, in the North American region, the annual consumer spending on outdoor recreational activities amounts to around USD 887 billion, which is greater than the spending on many basic amenities including education, gasoline and fuels, and pharmaceuticals. Outdoor recreational activities are considered as one of the most common pastimes in the U.S. Individuals spend most of their time and money on activities such as water sport, camping, trail sport, cycling, and skateboarding than on the movie tickets, video games, and home entertainment.

The Southeast Asian region will register a CAGR of over 8.5% over the forecast period. This is attributed to the growing popularity of countries such as Thailand and Cambodia as camping and unconventional holiday destinations. Demand for luxury campsites across Southeast Asian countries is increasing with the rising number of tourists opting for such offbeat vacations. Initiatives taken by the Government of Cambodia for developing adventure sports, such as trekking and hiking, to attract more tourists to the country, is anticipated to boost the market growth. 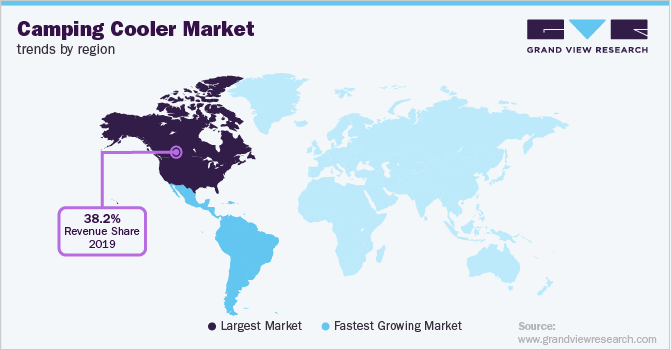 Camping is one of the most common outdoor activity in a number of countries such as the U.S., Australia, Norway, and Cambodia. Since 2012, participation in camping activities has remained steady at around 14% among the U.S. population over the age of six years. Participants prefer drive-up camping more than Recreational Vehicle (RV) and backpacking. It is observed that the highest number of camping trips in the North American region takes place in summer followed by fall, winter, and spring. More than 50% of the first-time campers prefer buying coolers for their travel, which is followed by sleeping bags and flashlights.

Latin America is projected to emerge as the fastest-growing regional market over the forecast period, followed by MEA. According to a report published by the World Travel & Tourism Council, spending on both domestic and international travel in Latin America has increased in 2018 as compared to the previous year. Major camping destinations in Brazil, including Bahia, Porto Seguro, Pousada, and Santa Clara, are expected to witness robust growth in tourism, thereby driving the market in Latin America.

Major participants are engaged in enhancing their existing products with improved technology for longer ice retention in order to keep pace with consumer demand and competition in the market. For instance, in July 2017, K2 Coolers, a designer and manufacturer of outdoor chillers, launched a new summit series, 20, 30, 50, and 70 at a price cheaper than that offered by its competitors.

Prominent manufacturers are also focusing on promoting their brands through celebrity endorsement. For instance, in October 2017, ORCA Coolers signed an agreement with Brett Fave, a former American footballer, for promoting its brand.

This report forecasts revenue and volume growth at the global, regional, and country levels and provides an analysis of the latest industry trends in each of the sub-segments from 2014 to 2025. For the purpose of this study, Grand View Research has segmented the global camping cooler market report based on volume, product, application, and region: