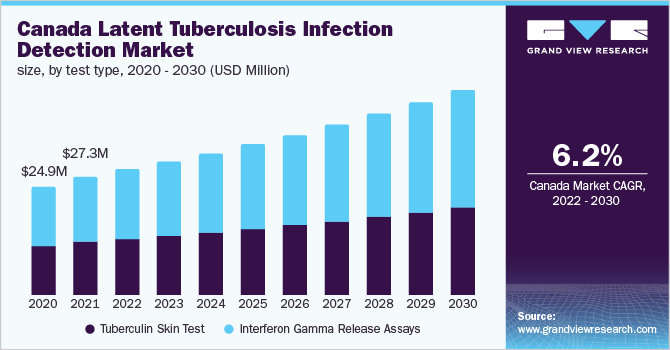 Government initiatives to increase awareness about tuberculosis disease and improvement in healthcare facilities are expected to fuel the market growth over the forecast period. For instance, the healthcare authorities at the province level in Canada monitor tuberculosis and submit related data to the federal government to analyze the trend of TB infection in the country.

The incidence of tuberculosis is lower in Canada compared to other developed countries; however, the risk of developing TB disease is higher among the indigenous population of Canada. For instance, in 2020, the rate of active TB among the Canadian indigenous population was 12.7 per 100,000 population. Moreover, the prevalence of latent TB infection in indigenous communities is also high in the country.

The Canadian Tuberculosis Standards recommends tuberculosis infection screening of people younger than 20 years of age in the country. If the results are found positive, then the treatment of LTBI is recommended for the same. At the state level, the Public Health authorities recommend both TST and IGRA tests for latent TB screening, which are expected to drive the demand for these tests during the forecast period.

Furthermore, the ongoing government efforts and initiatives to detect and treat tuberculosis in vulnerable populations are likely to facilitate market expansion. For instance, in March 2022, the government of Canada announced a contribution of USD 11 million to Stop TB Partnership’s TB REACH initiative. This funding will help to promote the detection of tuberculosis thereby supporting the industry's growth.

In addition, the presence of various market players and non-government organizations that are engaged in promoting awareness regarding tuberculosis is expected to support the Canada latent TB infection detection market expansion. For instance, the National Collaborating Centre for Infectious Diseases and Stop TB Canada are the major organizations in the country that support TB awareness and education for healthcare workers and the public.

Based on test type, the interferon-gamma release assay segment was the major revenue generator in 2021. Increasing awareness about TB infection and increasing recommendations for IGRAs from various public health authorities has boosted its adoption for LTBI detection. Health Canada has approved two IGRAs tests; QuantiFERON-TB Gold (QFT-GIT) assay by Qiagen and T-SPOT.TB assay by Oxford Immunotec for the detection of latent TB infections.

The diagnostic laboratories segment dominated the Canada latent tuberculosis infection detection market owing to efforts to improve patient outcomes by providing precise & prompt reporting at the retail level. Moreover, the ability of laboratories to handle a large volume of tests at an expedited rate is expected to further fuel the segment over the forecast period. Diagnostics laboratories such as Dynacare and Life Labs provide blood tests for the detection of latent TB infection in the country. 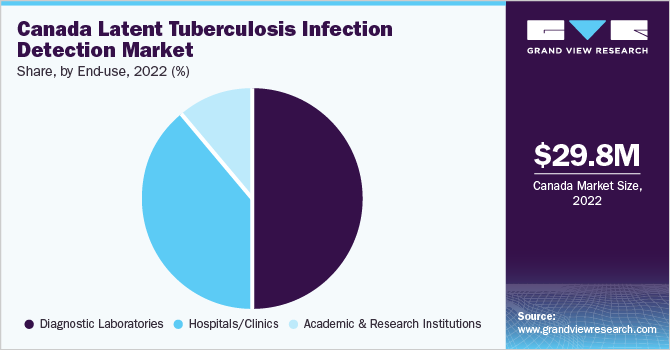 The hospital & clinics segment held the second-largest market share in 2021 owing to the high risk of getting tuberculosis infections in healthcare facilities. Moreover, individuals with medical conditions, such as HIV/AIDS, chronic renal failure, and other diseases that weaken the immune system, increase the risk of LTBI and its development into an active TB case. However, the academic & research institutions segment is expected to experience the fastest growth rate over the forecast period.

Canada’s latent tuberculosis infection detection industry is classified into provinces and territories. Ontario province led the market and it is expected to maintain its dominance over the forecast period. The large market share of the province can be attributed to its large population base, high immigration rate compared to other provinces, and better healthcare infrastructure. The immigration rate is highest in Ontario; it welcomes around 40% of the total immigrants of Canada every year. Similarly, British Columbia, Quebec, Alberta, and Manitoba also held a significant share of the LTBI detection market.

North Canada region including Yukon, Northwest Territories, and Nunavut is expected to grow at a faster growth rate compared with other parts of Canada. Improvement of healthcare facilities, a high portion of the indigenous population, and other factors increasing the risk of developing tuberculosis disease are driving the growth of the market in these regions.

Key players are adopting strategies such as new product development, merger & acquisition, and partnership to increase their market share in the country. Some prominent players in the Canada latent tuberculosis infection detection market include:

This report forecasts revenue growth at the country level and provides an analysis of the latest industry trends in each of the sub-segments from 2018 to 2030. For this report, Grand View Research has segmented the Canada latent tuberculosis infection detection market report based on test type, end-use, and province: 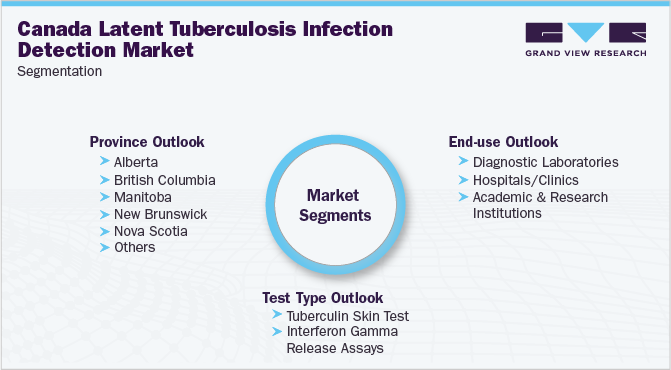 How big is the Canada latent tuberculosis infection detection market?

b. The Canada latent tuberculosis infection detection market size was estimated at USD 27.31 million in 2021 and is expected to reach USD 28.97 million in 2022

What is the Canada latent tuberculosis infection detection market growth?

b. Ontario province dominated the Canada LTBI detection market with a share of 17.97% in 2021. This is attributable to the high immigration rate, better healthcare infrastructure, and large population base in the region.

Who are the key players in Canada latent tuberculosis infection detection market?

What are the factors driving the Canada LTBI Detection market?

b. Key factors that are driving the market growth include high immigration from high-risk areas, increasing awareness about tuberculosis, improvement in healthcare facilities, and government initiatives to manage TB in the country.