The global cancer supportive care drugs market size was valued at USD 14.03 billion in 2021 and is expected to decline with a compound annual growth rate (CAGR) of -1.57% from 2022 to 2030. The approval and uptake of targeted drugs, which have lesser side effects than traditional chemotherapy drugs, and the launch of biosimilars are expected to impede the market growth. Factors supporting the market include the rising prevalence of cancer, increase in the geriatric population, and high adoption of chemotherapy in low- and middle-income regions. The global COVID-19 pandemic has had a significant impact on cancer care. According to the American Society of Clinical Oncology, there was a substantial decline in visits, cancer screenings, surgeries, and therapy amid the pandemic. 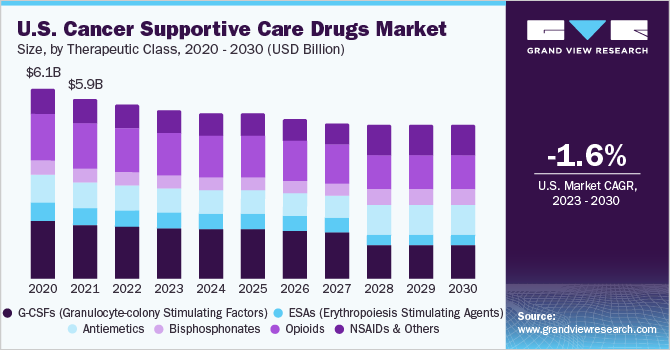 In addition, hospital outpatient evaluation & management (E&M) visits (74%), new patient E&M visits (70%), and existing patient E&M visits (60%) all saw a significant decrease. However, in most regions, around the second quarter of 2021, the overall condition returned to normal. Rising cancer prevalence coupled with the increasing geriatric population is among the most prominent factors driving the market growth. According to Globocan, the number of new cancer cases is anticipated to reach 28.4 million within the next two decades, with a rise of 47% from 2020. Moreover, the geriatric population is more susceptible to cancer; in developing economies, life expectancy is now exceeding 80 years.

According to the U.S. National Cancer Institute’s SEER Database, around two-thirds of all new cancer cases are diagnosed in people aged 65 years and above, showing that aging can make people more vulnerable to such disease. With the rise in technological advancements, major players are primarily focusing on the development of novel targeted therapies for the treatment of cancer. It has lesser adverse effects than traditional treatments, such as chemotherapy. These factors can impede the market growth over the forecast period. For instance, in April 2020, Gilead Sciences, Inc. received accelerated approval for Trodelvy (sacituzumab govitecan-hziy) from the U.S. FDA.

It is indicated for the treatment of patients with triple-negative breast cancer. It is an antibody-drug conjugate that targets and kills specific infectious cells through its toxic chemical molecule, hence having lesser side effects than chemotherapy and other traditional treatments. Furthermore, biosimilars and generic drugs gaining traction is another factor hampering the market growth. Companies are launching biosimilars of key drugs, impeding the growth of branded drugs. For instance, in June 2020, Pfizer received the approval for its NYVEPRIA, a biosimilar for Amgen’s NEULASTA.

The Granulocyte Colony Stimulating Factor (G-CSF) segment held the largest revenue share of more than 26.00% in 2021. It is a primary treatment option for cancer-related neutropenia. It is among the most commonly used supportive care drugs for breast and lymphoma cancers. For instance, G-CSF is administered to 70% of breast cancer and 84% of lymphoma patients in the U.K. However, the rising use of Immuno-Oncology (IO) agents, such as anti-PD-1/L1s, in treatment results in the decline of myelosuppressive chemotherapy, which restricts the growth of G-CSF. The antiemetics segment is expected to show positive growth during the forecast period. 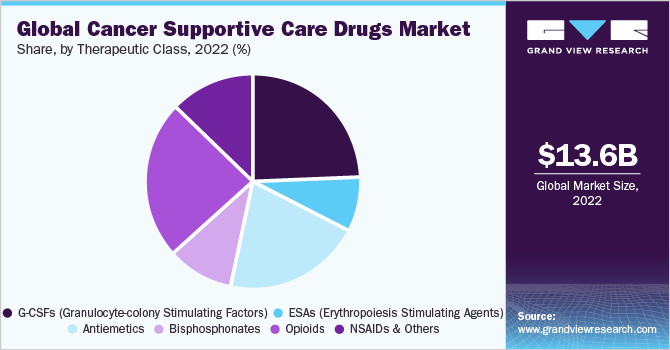 Chemotherapy-induced Nausea & Vomiting (CINV) is among the most common problems faced by patients on chemotherapy. The positive growth is due to the launch of newer drugs, such as Cinvanti, Sustol, and Varubi. However, the patent expiry of key antiemetic drugs, such as Emend, will impact the overall CINV drugs revenue. The opioid segment growth is expected to decline during the forecast period. Governments in several countries, including the U.S. government, have been imposing stringent regulations on opioid drugs. Due to this, the prescription rate for opioid drugs has declined drastically. For instance, according to the National Cancer Institute, between 2013 and 2017, the national opioid prescription rate declined by around 21% among oncologists. Thus, such factors are anticipated to impede the growth of opioid drugs over the forecast period.

Based on geographies, the global market has been further divided into North America, Europe, Asia Pacific, Latin America, and Middle East & Africa. The market in North America and other developed regions is expected to decline over the forecast period on account of the launch and rapid uptake of biosimilar and restrictions on opioid prescription. In addition, these regions have high adoption of personalized, targeted therapies as a result of their fewer side effects along with the increased awareness about the availability of such therapies and favorable reimbursement policies for high-cost targeted therapies. The developing regions, such as Asia Pacific, Latin America, and the Middle East & Africa, have high unmet needs for cancer supportive care. On account of the less developed healthcare systems and low disposable income levels in these regions, chemotherapy is still predominantly used as treatment. These factors are expected to drive market growth in these regions.

The market is highly competitive and manufacturers are required to enhance and update their products to overcome the associated side effects and address the unmet demand in the developing regions. Some of the prominent companies operating in the global cancer supportive care drugs market include:

This report forecasts revenue growth at global, regional, and country levels and provides an analysis of the latest industry trends in each of the sub-segments from 2017 to 2030. For the purpose of this study, Grand View Research has segmented the global cancer supportive care drugs market report based on therapeutic class and region:

How big is the cancer supportive care drugs market?

What is the cancer supportive care drugs market growth?

b. North America dominated the cancer supportive care drugs market with a share of 48.13% in 2021. This is attributable to increasing healthcare expenditure, favorable reimbursement scenarios, and the launch of new cancer supportive products.

Who are the key players in the cancer supportive care drugs market?

What are the factors driving the cancer supportive care drugs market?

b. Key factors that are driving the cancer supportive care drugs market growth include a large number of side effects associated with cancer treatment, increasing uptake of biosimilars, rising expenditure on healthcare, and availability of effective treatment methods.