The global cannabis extract market size was estimated at USD 5.3 billion in 2018 and is projected to exhibit a CAGR of 22.1% over the forecast period. Growing adoption of medical marijuana for the treatment of chronic diseases such as cancer, arthritis, and Alzheimer’s, as well as neurological problems such as anxiety, depression, and epilepsy is a key factor driving the market. Increasing legalization of medical cannabis in various countries in order to curb the black market and provide easy access to patients is also expected to spur market growth.

The overall marijuana market has been booming due to its increased adoption for medical and recreational purposes. Decriminalization and/or legalization of medical marijuana in some countries has led to a significant decrease in the black market as people are resorting to legally purchasing the same. Moreover, government earnings through taxation is viewed as an opportunity for countries to earn higher revenues. Oils and tinctures are generally used for treatment of conditions such as cancer, various psychological disorders, and symptoms such as nausea. They are also used for recreational purposes such as vaping. In terms of legality, laws pertaining to extracts such as CBD oil are more lenient compared to that of dried buds, which possess all components of marijuana. Moreover, demand for extracts is increasing and these products are anticipated to gain momentum in the coming years due to their ease of consumption in edible and vapor form and due to the slowly diminishing social stigma related to smoking of cannabis buds.

High prevalence of cancer is expected to be one of the crucial factors driving the market in the forecast period. According to WHO, cancer is the second leading cause of death in the world and was responsible for about 8.8 Million deaths in 2015 alone. In addition, growing disease burden of chronic pain and increasing requirement of pain management therapies across the globe are expected to drive demand for medical marijuana through 2025. Furthermore, children undergoing cannabis therapy are prescribed with cannabis oils due to age limitations and due to the fact that its dose can be exactly calculated, which is otherwise difficult in case of buds.

In 2018, the oil segment accounted for the largest revenue share and was valued at USD 3.5 billion. This segment is also expected to witness the fastest growth rate over the forecast period primarily owing to rising demand in medical applications. Physicians prescribing medical cannabis need to track the accurate consumption of CBD, THC, and other components that are part of the dosage. Quantifying this information from smoked cannabis is difficult and therefore, a greater number of physicians prefer prescribing cannabis oil and extracts.

Marijuana tinctures are made by dissolving the drug in alcohol and are intended to be consumed sublingually. Tinctures have a rapid onset of action compared to oils. The onset of action of oils and other forms of cannabis medications is around 45 min, while tinctures show effect in around 15 min. In case of patients suffering from severe pain, waiting for 15 minutes is a more viable option compared to 45 minutes. As a result, demand for tinctures is expected to increase over the forecast period.

The tinctures segment is anticipated to expand at a CAGR of 19.5% between 2019 and 2025. Several manufacturers in the market have started expanding their portfolio in extracts. These products are being marketed with precise information on CBD and THC content or sole CBD products that are marketed for medical use.

In 2018, full spectrum held the largest revenue share in the cannabis concentrates market and was valued at USD 3.3 billion that year. The segment is expected to exhibit the fastest CAGR of over 20.0% over the forecast period. A full-spectrum extract contains the complete range of cannabinoids that can be extracted from a marijuana plant. Apart from cannabidiol (CBD), there are over 100 other cannabinoids that are present in the purest form of extract. Owing to their presence, full spectrum cannabis produces an entourage effect - a synergistic relationship between cannabinoids and terpenes that exhibits an increase in the healing properties of each cannabinoid.

Cannabis isolates are the purest form of their respective cannabinoids obtained by extraction and isolation. They have fewer health benefits when compared to full-spectrum cannabis extracts. However, these isolates possess certain advantages owing to which, their adoption has increased over the years. The purest forms of isolated cannabinoids have no psychoactive effects, as they have no/scarce THC content. Therefore, these isolates would test negative for THC. 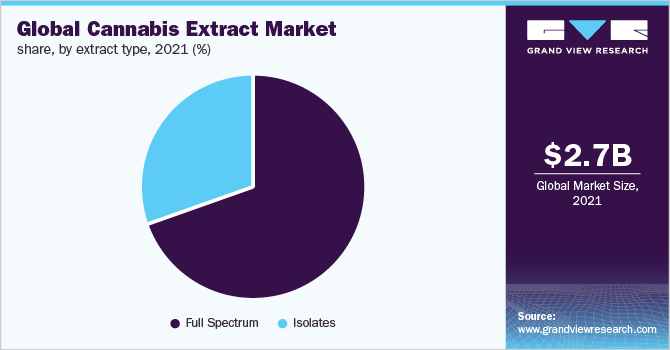 Furthermore, as THC is illegal in many countries, its adoption in the form of isolates or full spectrum products is low in most countries. However, most physicians who prescribe medical marijuana believe in the entourage effects of its components. Thus, demand for full spectrum extracts is expected to increase in the coming years as the medical community forces legal bodies to legalize them.

North America accounted for the largest revenue share in 2018, amounting to USD 4.8 billion. This is majorly attributed to high product adoption and utilization owing to government approvals. A decade ago, only 32.0% favored legalization and 60.0% opposed its use. However, as of 2018, use of medical marijuana is legal in 30 states, along with Puerto Rico, Guam, and the District of Columbia in U.S. Currently, nearly 57.0% adults in U.S. are in favor of using marijuana for medical purposes, such as treatment of inflammations, pain, and cancer. Hence, increasing support of U.S. citizens regarding the use of cannabis extracts for medical purposes will fuel market growth during the forecast period.

Europe held the second largest revenue share in 2018. Italy is the fourth largest consumer of marijuana oil and its concentrates. Before 2000, medical use of marijuana in certain quantities was legalized in Netherlands; however, its sale was still illegal and hence marijuana was sourced from the illicit market.Therefore, the Office of Medicinal Cannabis was established in March 2000, to make quality product available to patients.

The cannabis concentrates market in Israel is expected to register a CAGR of 34.3% from 2019 to 2025, making it highly lucrative over the forecast period. This can be attributed to liberal government policies, technical innovations and high research activity, and a well-developed ecosystem. In January 2017, the government invested USD 2.13 Million in 13 different research projects to study the effect of marijuana on conditions such as metabolic syndrome and prevention of transplanted organ rejection. Increasing investments in R&D are likely to expand the application of marijuana in the medical field.

Some of the key players operating in the market are Canopy Growth Corporation; Aphria Inc.; Aurora Cannabis;MARICANN INC.;Tilray; GW Pharmaceuticals plc; Organigram Holdings Inc.; Tikun Olam, Ltd.; and The Cronos Group. Producers have been focusing on partnership strategies in order to enter new markets and strengthen their position. For instance, Canopy Growth Corporation established a partnership with Danish Cannabis ApS, creating a new joint venture Spectrum Denmark ApS. This venture is aimed at strengthening the company’s foothold in the European medical marijuana market.

This report forecasts revenue growth at country levels and provides an analysis of latest industry trends in each of the sub-segments from 2014 to 2025. For the purpose of this study, Grand View Research, Inc. has segmented the global cannabis extract market report on the basis of product, extract type, and country: