The global capacitive sensor market size was valued at USD 27.03 billion in 2019 and is expected to grow at a compound annual growth rate (CAGR) of 5.2% from 2020 to 2027. Capacitive sensors are gaining popularity, owing to their superior sensitivity, greater durability, and higher measurement accuracy than inductive or resistive sensors. These sensors are undergoing rapid developments to meet the advanced user interface necessities of modern applications. Moreover, in consumer electronics, the rising demand for multi-touch screens that provide features such as pinch to zoom is expected to drive market growth. The growing demand for capacitive sensors in consumer electronic products such as multi-touchscreens, multi-media players, tablets, smartphones, and gaming consoles, is a major factor favoring the market growth. Moreover, the increasing demand for these devices incorporating touch screens is contributing to the rising demand for capacitive touch sensors.

Increasing government support for research and development activities in nanotechnology-based applications such as space exploration, medicine, food packaging, and water purification has spurred market growth. For instance, since September 2016, the National Science Foundation (NSF) has been providing funds to various companies such as Texas Instruments Incorporated and Synaptics Inc. for the development of capacitive sensors for the healthcare and food and beverages industry. Furthermore, the decrease in size of the capacitive sensors has enabled them to be deployed in unmanned aerial vehicles for motion stabilization applications and in mobile robotics.

The growing emphasis on electronic component manufacturers such as SK Hynix, Inc. and Integrated Device Technology (IDT), Inc., on the development of signal conditioners for capacitive sensors has positively impacted the market growth. For instance, in November 2019, IDT, Inc. launched ZSSC3230-an energy-efficient 18-bit signal conditioner for capacitive sensors. Its low power consumption makes it suitable for use in battery-powered devices such as UAVs and wearable devices. The ongoing research and development activities focusing on the implementation of capacitive sensors in the healthcare sector have also fueled the market growth. Research institutes in Japan are currently working on the integration of capacitive touch sensors with a 1-micron size of nylon fibers that would be used for patient monitoring.

Increasing demand from the aerospace and defense sector for applications such as power door operating systems and thrust reverser has significantly boosted the industry's growth. For instance, in September 2018, MTS Systems Corporation received a purchase order from the U.S. Department of Defense worth USD 187 million. The purchase order included the supply of capacitive motion sensors and proximity sensors. Furthermore, the development of Projected Capacitive Touch (PCT) technology that allows capacitive touch sensors to operate even under screen protectors are significantly driving the market growth. Besides, the PCT technology also enhances a touchscreen’s accuracy by forming a triangulated grid around the point of touch.

The ongoing R&D activities focused on the development of capacitive sensors for level measurement activities are a major factor driving the growth of the market. For instance, in July 2017, UWT GmbH launched the new NivoCapa NC8000, suitable for continuous level measurement in liquid and bulk solids applications. However, issues related to the supply shortage of indium tin oxide are challenging the market growth. Moreover, touch sensors work poorly when the person operating the device is wearing gloves, making them unsuitable for applications in some industries such as oil and gas, food and beverage, and construction, which is hindering the capacitive sensors market growth.

In 2019, the touch sensor segment held the largest volume share of over 55%. In recent years, there has been an increased demand for consumer electronic devices such as smartphones, gaming consoles, smart wearables, and portable media players. Consumers are increasingly demanding devices with touch screens, which is a major factor that contributed to the dominance of the segment. Additionally, touch sensors are widely being used in control panels for electrical appliances such as washing machines, televisions, collaboration systems (video conferencing and web conferencing), micro-inverters, and machinery controllers. Control panels with touch sensors can be sealed, which makes them resistant to liquid spills and dust. As a result, the use of touch sensors is rapidly increasing in industries such as oil and gas, mining, manufacturing, and chemical.

The growth of the position sensor segment is driven by the increasing adoption of machine tools such as assembly and welding robots, laser cutting machines, bending presses, and sheet metal processing equipment. These sensors are being increasingly used to measure the errors arising in machine tools such as surface grinders, lathes, and milling machines, contributing to the segment growth. Moreover, capacitive position sensors are finding applications in fields such as precision positioning and precision thickness measurement. In the semiconductors industry, precision positioning is used to position the wafers for exposure, wherein capacitive sensors can measure the position of wafers in sizes of nanometers.

The consumer electronics segment dominated the market in 2019 with a volume share of over 30%, owing to the increasing demand for multimedia devices with features such as tracking and motion stabilizing. Furthermore, the emergence of fabrication techniques such as Micro-electromechanical Systems (MEMS) has considerably reduced the size of sensors. This has enabled them to be deployed in handheld consumer electronics such as smartphones, walkmans, and tablets. Furthermore, increasing demand for entertainment applications such as Virtual Reality (VR), Augmented Reality (AR), and wearable devices, are some of the major factors favoring the segment growth. There has been a rapid rise in the adoption of smartphones and the trend is expected to continue in the future. According to research conducted by the GSM Association in 2018, the number of smartphone owners in China is expected to reach 3 billion by 2025 from 1.4 billion in 2017. 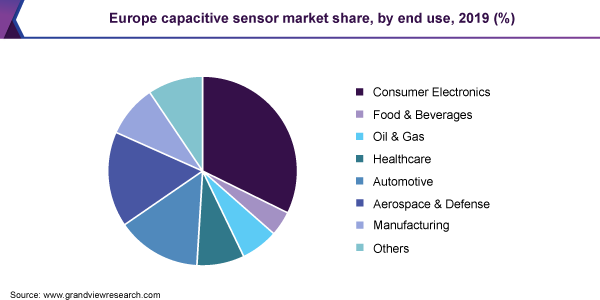 The automotive segment is anticipated to register the fastest CAGR of over 9% in terms of revenue during the forecast period. Capacitive sensors are deployed for the implementation of Human-Machine Interface (HMI) applications, such as illumination control, and navigation control. Furthermore, various governments are promoting the adoption of position sensors in autonomous vehicles, driving the segment growth. For instance, the Japanese government in October 2019, announced the introduction of a driverless taxi that will be used as Olympic transport.

The automated vehicle is nested with a position, humidity, temperature, and capacitive sensor, among others. Position sensors are used in the keyless entry system, infotainment system, 3D gesture, and interior lighting control of the car. The increase in stringency of regulations for the implementation of the Advanced Driver Assistance System (ADAS) and airbags has led to a surge in the demand in automotive applications. For instance, the Federal Motor Vehicle Safety Standards No. 208 administered by National Highway Traffic Safety Administration mandates the usage of airbags in cars for enhanced passenger safety.

Asia Pacific is anticipated to register the fastest CAGR of around 8% during the forecast period. The established consumer electronics industry in the region is presenting regional players such as OMRON Corporation; and Fujitsu, Ltd. with significant growth opportunities. As a result of increasing smartphone penetration in the region, there has been a growth in demand for touch screens from smartphone manufacturers such as Samsung Electronics Co., Ltd., and XIAOMI Corporation. The ongoing R&D activities, actively funded by governments drive the regional market growth.

Europe is anticipated to expand at a significantly high CAGR over the forecast as a result of the increasing adoption from the region's vast automotive sector. Moreover, various automotive manufacturers in the region such as Audi AG, BMW AG, and Volkswagen Group, are emphasizing the adoption of capacitive touch sensors in their automobiles.

For instance, in September 2015, BMW AG awarded a contract to Cypress Semiconductor Corporation for providing CapSense CY8C21534-a capacitive touch sensor. The sensor will be integrated into the infotainment systems of BMW AG's cars, including BMW 5, BMW 6, and BMW 7. These sensors are gaining popularity in the region's healthcare sector in applications such as smart pillboxes, Wireless Body Area Networks (WBAN), and Structural Health Monitoring (SHM) equipment.

Various other manufacturers such as Cypress Semiconductor Corporation; Synaptics, Inc.; and Texas Instruments Incorporated are investing heavily in product development. For instance, in March 2016, Synaptics, Inc. launched its family of capacitive sensors-S788x that are widely used in automotive infotainment systems. Additionally, in June 2018, Texas Instruments Incorporated launched the new HDC2080 capacitive sensor. HDC2080 is an integrated humidity and temperature monitoring system suitable for use in the oil and gas and food and beverage industries. Some of the prominent players in the capacitive sensor market include:

This report forecasts revenue and volume growth at global, regional, and country levels, and provides an analysis of the latest industry trends in each of the sub-segments from 2016 to 2027. For the purpose of this study, Grand View Research has segmented the global capacitive sensors market report based on type, end use, and region:

How big is the capacitive sensors market?

What is the capacitive sensors market growth?

Which segment accounted for the largest capacitive sensors market share?

b. Europe dominated the capacitive sensors market with a share of 32.5% in 2019. This is attributable to various automotive manufacturers in the region such as Audi AG, BMW AG, and Volkswagen Group, emphasizing the adoption of capacitive touch sensors in their automobiles.

Who are the key players in the capacitive sensors market?

What are the factors driving the capacitive sensors market growth?

b. Key factors that are driving the market growth include the rising consumer electronics industry across the world, the growing trend of miniaturization of sensors, and the increasing use of scratch-resistant surfaces in electronics.