The global caravanning market size was valued at USD 21.2 billion in 2021 and is anticipated to expand at a compound annual growth rate (CAGR) of 13.6% from 2022 to 2030. The cost-effectiveness and convenience of caravanning over the traditional way of vacationing is one of the prominent factors why travelers are increasingly preferring caravanning. The COVID-19 pandemic led to huge economic loss to the tourism industry and its impact on the market was no different. Lockdowns limited people inside their homes and travel was restricted amid the strict COVID-19 restrictions. As the flights were halted, the number of international tourists slumped sharply and hence the demand for caravanning declined. 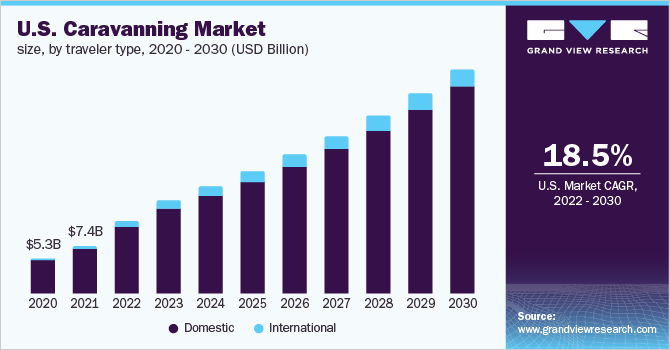 After a major setback in the year 2020, the demand for caravanning has been slowly rising up again, and is expected to surpass its pre-pandemic market value in 2023. As majority of people around the world have been vaccinated, and travel restrictions have been eased, people are now less hesitant to travel and are undertaking large number of trips globally. According to UN World Tourism Organization, the number of international arrivals worldwide nearly tripled in the first quarter of 2022 (Q1 2022) as compared to Q1 2021. As per the data, there were around 41 million international arrivals in Q1 2021 which rose to 117 million in Q2 2022.

There has been an increased preference for private tours in the recent years and this is expected to greatly boost the market. Not only renting, the number of people owing caravans is increasing. According to Recreation Vehicle Industry Association (RVIA), the number of RV owning households in the U.S. reached 11.2 million in 2021, with the RV ownership increasing by 62% from 2001 to 2021. As people owing an RV are more likely to make frequent caravanning trips, the rising interest of people in owning RVs is further expected to boost the market.

In terms of value, domestic traveler type dominated the market with a share of 77.5% in 2021. The segment is estimated to grow steadily during the forecast period as more and more people are exploring their own countries in a caravan. The number of domestic tourists have been growing at a faster pace as compared to international tourists in most of the countries globally. According to U.S. Travel Association, the number of domestic trips in the U.S. increased from 2.18 billion in 2015 to 2.33 billion in 2019.

In terms of value, towable caravan dominated the market with a share of 70.5% in 2021. In most of the developed Western countries, towable RVs are more popular for caravanning as compared to the motorized ones. A larger share of travelers owns an RV in countries like United States and Australia. Towable caravans are less expensive and are more convenient, as it can be unhitched after reaching a location.

Motorized segment accounted for a share of 29.5% in 2021. In regions like Asia and South America, there are generally a significantly large share of people renting an RV for caravanning as opposing to owing it. Also, the caravan production in Asian countries like China and Japan majorly comprises of motorized caravans which, in turn, are more in use in these countries.

The 55 and above segment accounted for the largest contribution in the global market for caravanning with a market share of 45.9% in 2021. This segments includes a large number of retired people. A large number of people reaching their retirement age or have retired choose caravanning lifestyle for spending their holidays. Hence, caravanning has always been popular among people in the age range 55 and above. 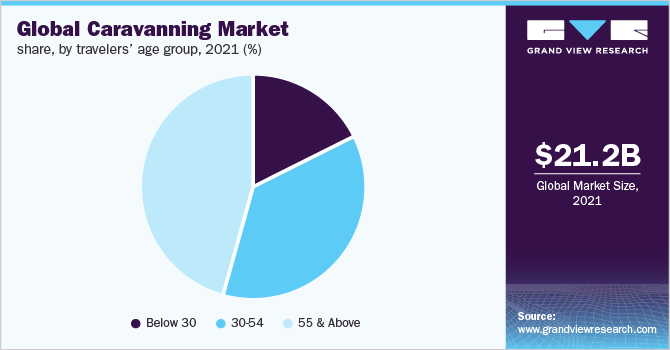 The below 30 segment is projected to register a CAGR of 16.5% from 2022 to 2030. Although caravanning has historically been more popular among the higher age group, more and more young people are adopting the caravan lifestyle. Apart from renting caravans, a large number of younger generation people are purchasing caravans. According to RVIA, millennials and Gen Z stand out among the RV owners who plan to buy another RV in the next five years, starting from 2022. As per the association, around 84% of people aged between 18 and 34 are planning to buy another RV during the above mentioned period.

Europe dominated the caravanning market with a share of 49.2% in 2021. Countries in Europe have high disposable income and hence the people in the region spend a significant amount in vacationing. With a high popularity of tourism in the region and large number of people with high disposable income, there is a large customer base for caravanning. Also, Europe has the highest number of caravans compared to any other region. 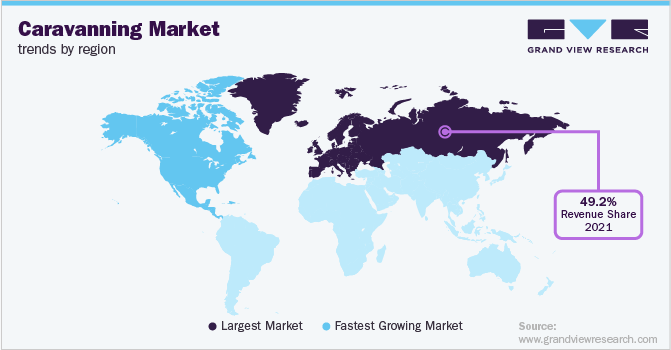 The market for caravanning in North America was valued at USD 8,582.3 million in 2021 and is projected to register a CAGR of 17.7% over the forecast period. The growing number of younger people taking interest in caravanning is one of the prominent factors driving the growth of North America. Towable caravan is the most popular caravan type in the region. According to RVIA, 327 thousand towable RV were shipped in the U.S. in 2015, which increased to 544 thousand in 2021, witnessing a growth of more than 66% in annual shipments during the period.

The market includes both international and domestic participants. Key market players focus on strategies such as acquisitions and expansions in caravanning to enhance their service reach in the market.

Some of the key players in the caravanning market include:

This report forecasts revenue growth at global, regional, and country levels and provides an analysis of the latest industry trends in each of the sub-segments from 2017 to 2030. For the purpose of this study, Grand View Research has segmented the global caravanning market report on the basis of traveler type, caravan type, travelers’ age group, and region: 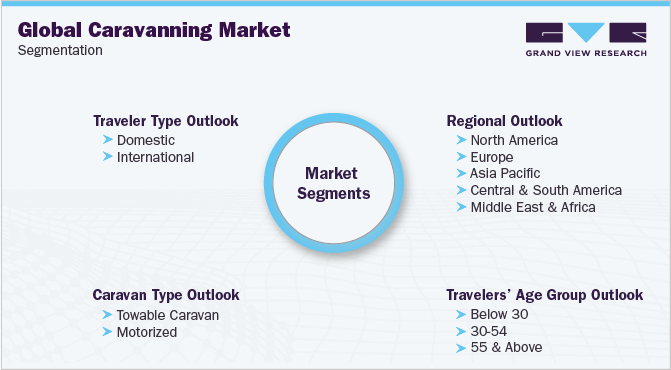 How big is the Caravanning Market?

What is the Caravanning Market growth?

Which segment accounted for the largest Caravanning Market share?

b. Europe dominated the canned seafood market with a share of 49% in 2021. This is attributed to the countries in Europe having high disposable income and hence the people in the region spend a significant amount in vacationing.

Who are the key players in Caravanning Market?

What are the factors driving the Caravanning Market?

b. Key factors that are driving the Caravanning market growth include the cost-effectiveness and convenience of caravanning over the traditional way of vacationing is one of the prominent factors why travelers are increasingly preferring caravanning.