The global carbon dioxide market size was valued at USD 3.68 billion in 2021 and is expected to expand at a compound annual growth rate (CAGR) of 7.3% from 2022 to 2030. Increasing utilization of Carbon Dioxide (CO2) for Enhanced Oil Recovery (EOR) and its surging usage in food & beverages and medical industries are anticipated to fuel the growth of the global market during the forecast period. Depleting oil reserves and increasing dependence of different regions, especially in Asia Pacific, on crude oil imports have increased the deployment of enhanced oil recovery technology, thereby fueling the growth of the market. The U.S. is one of the largest markets for carbon dioxide in the world. The market in this country is projected to grow at a CAGR of 7.2% over the forecast period in terms of revenue. The growth of the market in the U.S. can be attributed to the ongoing industrialization and the flourishing oil & gas industry in the country. 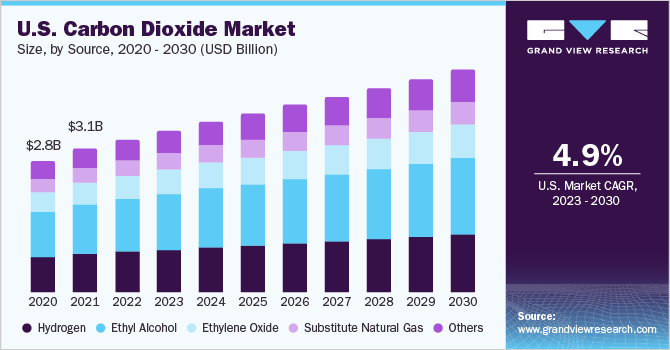 Carbon dioxide gas is widely consumed in the oil & gas industry in the U.S. for enhanced oil recovery. The use of this gas eases the flow of oil and reduces the viscosity of the extracted oil. The carbon dioxide flooding technique is used to enhance the quality of extracted light and heavy oils.

The ethyl alcohol segment dominated the market in 2021 by accounting for a market share of about 33% in terms of revenue. The growth of this segment can be attributed to the easy availability of ethyl alcohol as a long-term and reliable source for producing high-commercial value carbon dioxide as a by-product. Moreover, the surged global demand for food-grade carbon dioxide is projected to fuel the production of carbon dioxide from ethyl alcohol in the coming years.

The food & beverages application segment dominated the market in 2021 with a revenue share of about 38%. The growth of this segment can be attributed to the increasing global demand for carbonated drinks. Carbon dioxide is often used in Modified Atmospheric Packaging (MAP) to extend the shelf life of food products. In addition, it is used in cryogenic freezing systems, which offer more temperature flexibility than mechanical refrigeration systems. These factors are also expected to significantly contribute to the consumption of carbon dioxide in food & beverage applications in the foreseeable future.

The consumption of carbon dioxide in medical applications is increasingly gaining significance worldwide. It is also used for the development of new medicines to minimize invasive surgeries. The carbon dioxide gas is primarily used as an insufflation component for several surgical procedures, including laparoscopy, endoscopy, and arthroscopy. In medicinal baths, it induces warm sensations and acts as a vasodilator for the skin by stimulating its heat receptors. In addition, insufflation with carbon dioxide makes it easy to perform endoscopic procedures on patients.

Ongoing innovations and R&D activities worldwide have led to the utilization of carbon dioxide for the production of fuels, chemicals, and building materials. These factors are expected to enhance the consumption of carbon dioxide in a number of applications, including oil & gas, medical, rubber, firefighting, crop growth enhancement, renewable fuel production, etc. over the forecast period. This, in turn, is anticipated to enhance the demand for carbon dioxide across the world in the coming years. 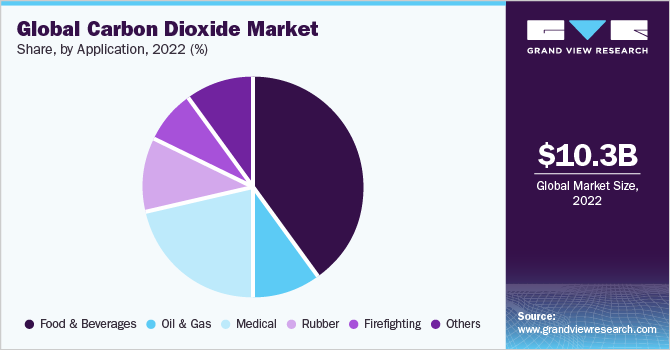 Medical-grade carbon dioxide is used as a pure gas or mixed with other gases to form specialized mixtures for various purposes including anesthesia, breathing stimulation, and equipment sterilization. It is also used for minimally invasive surgeries, including endoscopy, arthroscopy, and laparoscopy, as an insufflation gas, where CO2 helps expand and stabilize the operating areas for better visibility. It is also used for local anesthesia and in transient respiratory stimulation applications.

The presence of a large number of high-end hospitals and medical facilities in developed countries and the increase in the number of healthcare facilities in developing countries are contributing to the growth of the medical segment. The medical industry is anticipated to grow over the forecast period owing to the increasing old age population and growing health concerns among the people due to the ongoing COVID-19 crisis. These factors are expected to boost the utilization of carbon dioxide in the medical application segment in the forecast period.

In terms of revenue, Asia Pacific accounted for the second-largest revenue share in 2021. The region is a key consumer of carbon dioxide in the world. Food & beverages is the leading application segment in Asia Pacific. The growing usage of carbon dioxide in food products and beverages is also contributing to its increased production in the region. The ongoing industrialization in Asia Pacific has promoted the usage of firefighting equipment in the region to avoid industrial hazards. Equipment such as fire extinguishers use carbon dioxide to extinguish the flames.

Top market players such as Linde plc and Matheson Tri-Gas, Inc. have adopted sustainable sourcing strategies after considering the long-term opportunities and current regulatory scenario. Companies are now focusing on delivering long-term value to shareholders to grow and sustain in the market. The key players emphasize building robust and low-risk strategies that will ensure a significant profit margin and build a strong foundation for their shareholders. The companies are more focused on strategically producing industrial gases with advanced sourcing-automation production processes owing to increased demand from end-users for balancing the demand-supply scenario. Moreover, ascending demand for Carbon Capture Storage (CCS) has encouraged the market players to focus on the development of such technologies to control carbon emissions. Some prominent players in the global carbon dioxide market include:

This report forecasts volume and revenue growth at global, regional, and country levels and provides an analysis of the latest industry trends and opportunities for each of the sub-segments from 2019 to 2030. For this study, Grand View Research has segmented the global carbon dioxide market report based on source, application, and region:

How big is the carbon dioxide market?

What is the carbon dioxide market growth?

b. The ethyl alcohol source segment accounted for the largest revenue share of over 33% in 2020 in the CO2 market.

Who are the key players in the carbon dioxide market?

What are the factors driving the carbon dioxide market?