The global carbonated beverages market size was valued at USD 406.89 billion in 2019 and is expected to grow at a compound annual growth rate (CAGR) of 5.1% from 2020 to 2027. Strong popularity of soda drinks among the generation X and generation Y age groups is expected to play a crucial role in expanding the market size. The buyers prefer such drinks as they have an acidic bite and produce a pleasant tingling and offer cooling sensation with every sip. Along with these, the product is composed of fruit flavors, which promote the acceptance of such products among consumers. A carbonated beverage is manufactured using clean water, flavoring elements to establish the flavor profile, sugar or other sweeteners, coloring agents, and preservatives that are intended to be added. Technology has certainly played its part in the increasing consumption of carbonated beverages with the advent of glass bottles, cans, plastic bottles, high-speed packaging lines, and evolving packaging systems. 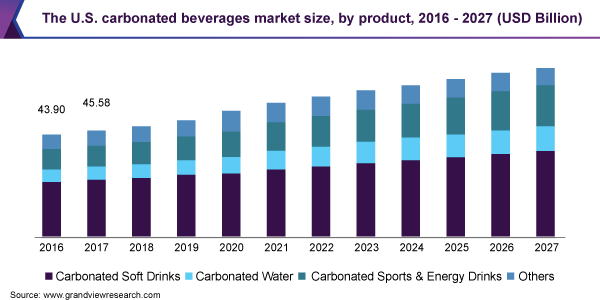 The consumption of carbonated beverages has further increased owing to the wonderful pairing of these fizzy drinks with certain food. Bacons, along with stinging Sriracha, are considered to be one of the best companions of cold cola.

Some of the other items that are extremely enjoyed with carbonated drinks are steak, ramen, Korean short ribs, meatloaf, strawberry milkshake, bagel, nachos, pizza, taco, skewers, chicken salad, roast chicken, clambake, mushrooms pasta, and Chinese chicken wings. These beverages are paired by contrasting or mirroring the flavor of the snacks. The contrasting flavor of snacks and drink works to complement each other. The fizz from an ice-cold drink helps in enhancing the mealtime experience.

Carbonated soft drinks accounted for more than 50.0% share of the global revenue in 2019. Companies have been using a variety of strategies for creating a wider penetration of carbonated beverages and sustaining the customer base. Product innovation is one of the major moves that most companies have been opting to enhance their revenue.

The carbonated sports and energy drinks segment is expected to witness the fastest growth during the forecast years with a CAGR of 7.2% from 2020 to 2027. A large number of sports and energy drink manufacturers have been adding fizz to the beverage to create freshness. In June 2020, VPX Sports launched Noo Fuzion, a new line of carbonated ready-to-drink pre-workout beverages, which is capable of inducing lean muscle growth and has energy-boosting features.

The online stores and D2C segment is expected to witness the fastest growth during the forecast years with a CAGR of 8.0% from 2020 to 2027. Some of the e-commerce platforms offering carbonated beverages directly to customers are Amazon, Target, Kroger, Walmart, Publix, and Burger Boss.

Cola flavor accounted for 55.8% share of the global revenue in 2019. These products have been enjoying their lead owing to the first mover’s advantage. Furthermore, a high degree of innovation deployed by key manufacturers, including The Coca-Cola Company and PepsiCo, in terms of the launch of products in zero-calorie and diet-free content is expected to maintain the popularity of the cola flavor segment in the near future. 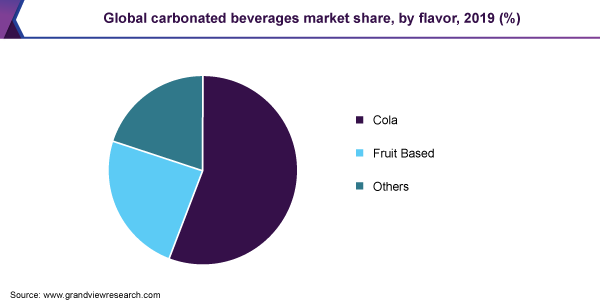 The fruit-based flavors segment is expected to witness the fastest growth during the forecast years with a CAGR of 6.3% from 2020 to 2027. In June 2020, Rapscallion Soda launched S_01 Rhubarb - sour face pull, a fruity flavored carbonated beverage. It is a sustainable, low calorie, and slightly sour drink and has a fizzy floral finish. It is infused with Scottish rhubarb, pink grapefruit zest, Sichuan pepper, and raw organic cane sugar.

The Middle East and Africa is expected to register the fastest CAGR of 6.8% from 2020 to 2027. The region has been adopting the product rapidly and countries, like Nigeria and Kenya, are dominating the industry. Youthful population, rapid urbanization, widening financial sectors, and major manufacturers eyeing the region for product penetration are leading to the rapid growth of the market.

Product launch plays the most crucial role in the growth of carbonated beverages. For instance, in June 2020, Clear/Cut Phocus introduced sparkling water containing natural caffeine from tea and the amino acid L-theanine in cola flavor. The product has been created specifically to suit the demand of modern consumers and as a result, has a classic taste without the problematic ingredients. The drink contains extracts of cinnamon, citrus, and vanilla, with notes of caramel to create the traditional cola sensation. The product is free from sugars, sweeteners, sodium, and calories. A pack of 12, 11.5 oz cans is being sold for USD 19.99. Some of the prominent players in the carbonated beverages market include:

This report forecasts revenue growth at the global, regional, and country levels and provides an analysis of the latest industry trends and opportunities in each of the sub-segments from 2016 to 2027. For the purpose of this study, Grand View Research has segmented the global carbonated beverages market report on the basis of product, flavor, distribution channel, and region:

How big is the carbonated beverages market?

What is the carbonated beverage market growth?

b. Central & South America dominated the carbonated beverages market with a share of 27.4% in 2019. This is attributable to the high consumption of cola drinks in countries including Brazil, Brazil, Colombia, Chile, and Argentina.

Who are the key players in the carbonated beverages market?

What are the factors driving the carbonated beverages market?

b. Key factors that are driving the market growth include growing need for premium drinks and new product launches by key companies including PepsiCo and the Coca Cola Company.