CMC, also known as cellulose gum, is manufactured by the chemical synthesis of naturally derived cellulose with chloroacetic acid. The multifunctional aspects of this product make it favorable for use as a key intermediate or ingredient in several applications. Cellulose gum enhances the aesthetics of the finished product by imparting smooth texture and modifies the viscosity of various foods, personal care products, and pharmaceutical formulations.

Recovery of the pharmaceutical sector owing to the rise in sales of specialty drugs is estimated to boost the requirements of natural stabilizing agents such as CMC, over the years ahead. The development of the pharmaceutical industry in the U.S. as a result of increased consumer spending on medicines is likely to amplify the market growth to a considerable extent over the years ahead. In terms of volume, the product demand in the cosmetics & pharmaceutical segment is estimated to rise at a noteworthy CAGR of 4.5% during the forecast period.

Paper & pulp is another significant application sector of the CMC industry in the U.S. Robust per capita consumption of paper coupled with rising activities regarding paper recycling and reuse in the country is estimated to propel the cellulose gum market growth in the next couple of years.

Food & beverages is another major growth driver of the cellulose gum market. Rise in the consumption of bakery foods, snacks, and beverages such as soy milk and fruit juices, in the country is estimated to boost the CMC consumption by the end of 2025.

The oil & gas segment was the third-largest application of CMC in the U.S. in 2016. Technological developments in the unconventional oil & gas sector mainly hydraulic fracturing and enhanced oil recovery, have resulted in increased shale gas exploration activities and in the U.S. This in turn is expected to boost the CMC consumption during the forecast period.

Food & beverages generated the highest revenue of the global CMC market, accounting for a market share of 33.7% in 2016. Cosmetics & pharmaceutical, paper & board, oil & gas, paints & adhesives, and detergents are another major application segments of the global market. 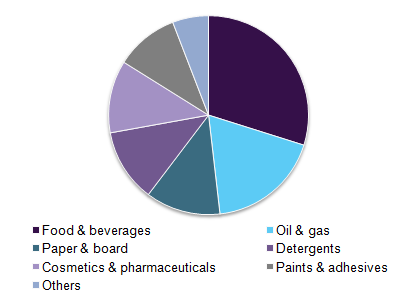 Rising awareness among consumers regarding healthy and nutritious diet coupled with increasing demand for energy drinks and processed food is expected to fuel the product demand. Growth of the global food industry on account of the increasing population, changing lifestyle of consumers is expected to drive demand.

Cellulose gum is utilized as a food ingredient and binding agent in the food and beverage industry for gelling, stabilizing, and foaming of food systems. Furthermore, it is incorporated as an emulsifying agent in various applications including jellies, cakes, meat products, bakery, and dairy products, ice creams, and non-alcoholic beverages.

Advancement in production technology coupled with significant consumption of alcoholic drinks such as wine, beer in Europe, and North America is expected to further increase demand for water-soluble polymers in the food and beverage industry. CMC is water-soluble and enhances the rheological properties, owing to which it is highly consumed in the processing of bakery and frozen foods. Furthermore, it increases the moisture retention capacity as well as the shelf life of baked goods. The multifunctional aspect of CMC is the key factor that is likely to favor its market growth in the food & beverage applications.

The product is largely used in the oil & gas industry as a thickener in drilling muds. Drilling mud is primarily used to carry solids cut by the drilling bit back to the surface. Owing to the water solubility and rheology modifying abilities of CMC, its consumption in the oil & gas sector is estimated to increase at a significant growth rate during the forecast period. The product is also used as an emulsifying agent in drilling fluids required in hydraulic fracturing operations.

Substantial use of CMC as a performance additive in paper & board production, owing to its attributes, which include shear stability and maximum dry strength is expected to fuel its consumption over the next few years. Nippon Paper Industries and CP Kelco offer an extensive carboxymethyl cellulose portfolio to cater to the end-user requirements of the paper & board industry. Nippon Paper Industries offers carboxymethyl cellulose under the Sunrose brand while CP Kelco offers Calexis and Finnfix for rheological modification of paper coatings.

Asia Pacific accounted for the largest share of40.9% of the total market volume in 2016. Furthermore, this region is likely to witness the fastest market growth during the forecast period, owing to substantial consumption in oil & gas, pharmaceuticals, cosmetics, and food & beverage industries in the region is expected to increase demand for carboxymethyl cellulose market.

The industrial growth of pharmaceutical and cosmetics sectors in Japan, China, India, and South Korea on account of increasing domestic demand coupled with low manufacturing cost as compared to the countries in North America and Europe is expected to drive the cellulose market growth over the forecast period.

Growing demand for personal care products in emerging economies as a result of increasing disposable income of consumers coupled with changing lifestyles especially in India, China, Malaysia, and Indonesia is expected to boost the industry growth by the end of 2025.

Central & South America is likely to witness emerging market growth in the next couple of years. Positive outlook regarding the downstream oil & gas industry especially in Brazil is expected to serve as a key factor in improving the CMC demand in the region. Favorable regulatory support in Brazil and Argentina for increasing the productivity of food & beverage and pharmaceutical sectors at the domestic level is another major driver of the industry.

Europe was the second-largest region in the global industry. Growing personal care products market in key countries including Germany, Italy, France, and the U.K. is expected to have a positive impact on the industry over the forecast period. Increasing use of CMC in synthetic as well as naturally derived personal care products is likely to have a positive effect on its market growth over the next few years.

Germany was one of the largest manufacturers of dairy products, baked goods, and confectionaries in Europe. In addition, the growing popularity of alcohol-free beers, savory snacks, and sugar-free confectionaries is expected to provide an impetus to Germany food & beverage industry growth.

An increasing number of regional market players, especially those that are based in China, India, and other developing countries is estimated to influence the competitive environment of the industry over the forecast period. This scenario is expected to intensify market rivalry in the next couple of years.

The rising entry of new companies across the value chain is likely to lead to market fragmentation over the years ahead. However, most major players in the market currently are forward integrated across the value chain, which is considered as a significant barrier for new entrants to break the threshold.

This report forecasts volume and revenue growth at global, regional & country levels and provides an analysis of the industry trends in each of the sub-segments from 2014 to 2025. For the purpose of this study, Grand View Research has segmented the global carboxymethyl cellulose market on the basis of application and region: