The global cardiac biomarkers market size was valued at USD 13.98 billion in 2021 and is expected to expand at a compound annual growth rate (CAGR) of 14.7% from 2022 to 2030. Cardiac biomarkers are witnessing growth owing to factors such as the high prevalence of acute coronary syndrome, technological advancements in cardiac biomarkers, rising demand for point-of-care (POC) cardiac testing kits, and high specificity in the detection of cardiac diseases, especially myocardial infarction. 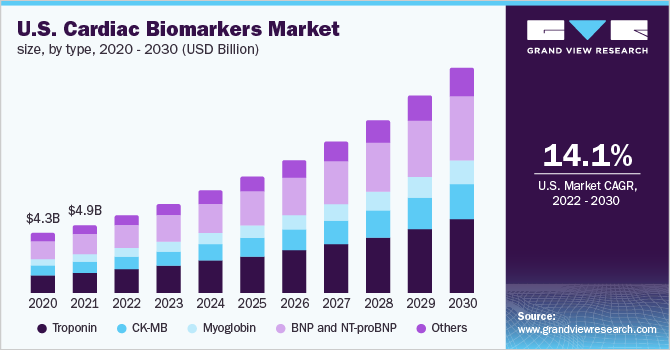 Moreover, the enhanced usage of cardiac biomarkers in SARS-CoV-2 patients to minimize the risk of cardiac diseases is further driving the demand. For instance, as per NCBI in 2021, biomarkers for cardiac injuries were elevated in complicated cases of COVID-19 patients and were directly associated with adverse disease outcomes. Thus, the use of cardiac biomarkers enabled the disease management of severely ill patients.

Moreover, cardiac test kits contain an array of combination tests that detect the presence of biomarkers, facilitating the easier diagnosis of cardiac diseases. Increasing demand for these kits is due to quick diagnosis and fast results obtained through them, which reduces the diagnostic time involved, expediting the treatment process. In addition, they diagnose chest pain and help identify risk factors prior to the occurrence of adverse cardiac events.

The decline in the rate of heart attack mortality is expected to adversely affect the adoption of products. According to a study conducted by the American College of Cardiology, from 2006 to 2016, the death rate from CHD in the U.S. declined by 31.8%, while for cardiovascular diseases, it declined by 18.6%. In addition, a research study conducted in the U.K. in September 2020 revealed that a decline in recurrent heart attacks was observed, but the risk of heart failure remains high. In addition, the same study mentioned that there was a decline in repeat attacks from 2008 to 2017, and a greater decline was observed in women as compared to men.

The troponin segment held the largest revenue share of over 30.0% in 2021 and is expected to witness the fastest growth during the forecast period. The exponential growth can be attributed to factors such as diagnostic efficiency, specificity, and accurate predictive detection of cardiac events when compared to other tests. The growing prevalence of myocardial infarction and stroke across the globe further boosts the market growth.

The BNP and NT-proBNP segment is expected to witness significant growth owing to its usage in the detection of heart damage and stress. New players are entering the market with the test in order to generate lucrative revenues. For instance, in June 2022, LumiraDx Limited announced the diversification of its portfolio with CE Mark for its D-Dimer test and NT-proBNP test. The commercialization of the latter is projected by the end of 2022, which is expected to facilitate clinical decision-making.

Acute coronary syndrome held the largest revenue share of over 50.0% in 2021 as the disease burden is rapidly rising in low- and middle-income countries when compared to high-income countries. Factors such as rapid urbanization and an increase in jobs that are sedentary are driving the disease incidence. Cardiac troponin T and I biomarkers tests have emerged as the prime diagnostic methods employed for the diagnosis of the disease.

The laboratory testing segment held the largest revenue share of over 65.0% in 2021. This can be attributed to the advantages offered by laboratory testing such as high sensitivity, specificity, scalability, and cost-efficiency. Furthermore, these laboratories facilitate the testing of all types of samples. Diagnostic laboratory services are crucial in clinical decision-making. 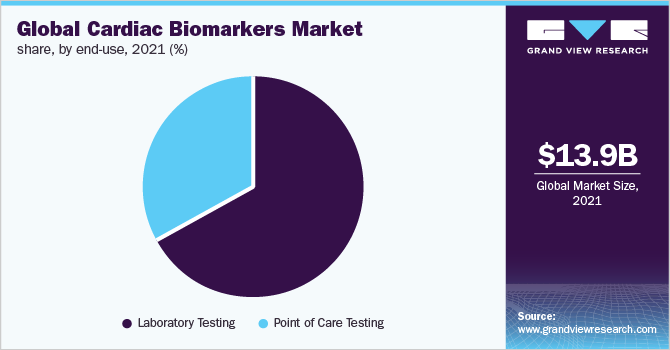 The point of care (POC) testing segment is demonstrating exponential growth due to the increasing use and adoption of highly sensitive and easy-to-use POC Troponin tests. The rising emphasis on providing effective, value-based healthcare services in the face of tight budgets is enhancing the importance of POC tests. In addition, these tests are the primary choice of medical professionals during emergencies for faster diagnosis of the patients. The demand for POC test kits for use in nursing homes and home healthcare is driven by the global phenomenon of the aging population, which is on the rise.

North America dominated the global market with a share of over 40.0% in 2021. This can be attributed to the developed healthcare system and high adoption of cardiac biomarkers as a tool for diagnosis and predictive diagnosis of conditions. The rising geriatric population requires the use of biomarker testing for the identification of conditions such as acute myocardial infarction, which is driving the demand for testing products. The presence of key players such as Quidel Corporation and Danaher Corporation in the region is another factor adding to the growth of this market. 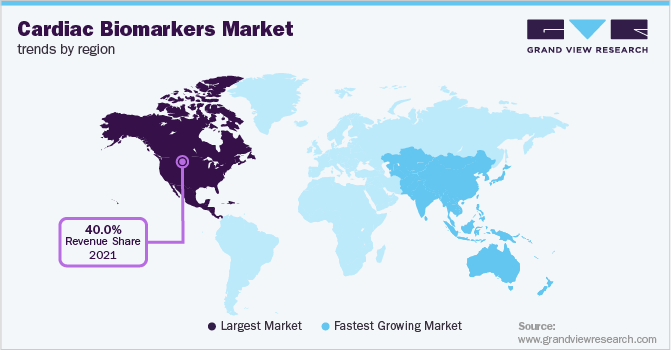 Asia Pacific is expected to expand at a significant rate during the forecast period owing to rising affordability for advanced cardiac tests, modernization in the countries, and increasing disposable income. The growing incidence of cardiovascular diseases (CVDs) in this region has resulted in a rise in the demand for improved diagnostics, government funding for target disease and other research, and healthcare expenditure. India has a higher prevalence of CVDs when compared to other developing countries. This high disease burden in the region is expected to drive the demand for cardiac biomarker diagnostics for facilitating the diagnosis, evaluation, and management of CVDs.

Players are increasingly opting for product launches, geographical expansions, strategic collaborations, partnerships, and mergers and acquisitions in emerging and economically favorable regions. For instance, in April 2021, using the Elecsys technology, which has the NT-proBNP and high sensitive cardiac troponin T, Roche announced a series of five new intended uses for two key cardiac biomarkers (cTnT-hs). This is expected to improve risk identification and diagnosis and allow the company to generate higher revenue from the existing products. Some prominent players in the global cardiac biomarkers market include:

This report forecasts revenue growth at the global, regional, and country levels and provides an analysis of the latest industry trends and opportunities in each of the sub-segments from 2018 to 2030. For the purpose of this study, Grand View Research has segmented the global cardiac biomarkers market report on the basis of type, application, end-use, and region: 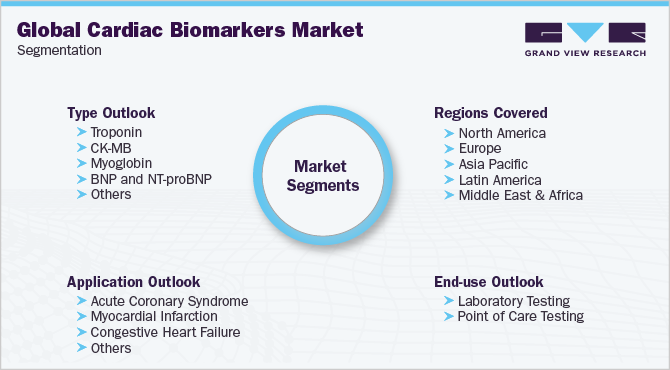 How big is the cardiac biomarkers market?

What is the cardiac biomarkers market growth?

Which segment accounted for the largest cardiac biomarkers market share?

b. North America dominated the cardiac biomarkers market with a share of 41.27% in 2021. This is attributable to the significant disease burden stemming from the high incidence of cardiovascular diseases in North America and the increasing popularity of PoC diagnostics. High awareness levels associated with advanced diagnostic & prognostic tools and supportive reimbursement policies facilitate adoption of novel technologies in the region.

Who are the key players in cardiac biomarkers market?

What are the factors driving the cardiac biomarkers market?

b. Key factors that are driving the cardiac biomarkers market growth include the high prevalence of cardiovascular diseases such as Acute Coronary Syndrome (ACS), Acute Myocardial Infarction (AMI), ischemia, and Congestive Heart Failure (CHF) globally and the rising adoption of biomarkers as a prognostic tool.