The global cardiac prosthetic devices market size was valued at USD 3.7 billion in 2015 and is expected to witness attractive growth over the forecast period. The major companies are enhancing the longevity of their product through technological advancements. These companies are also focusing on expanding the safety of the cardiac prosthetic devices, which is expected to increase the demand for such products.

Around 610,000 people are reported to die every year in the U.S. owing to cardiovascular diseases. Disorders like stroke and prosthetic valve failure lead to high mortality rates, which will impact the market to a great extent, thereby, boosting the demand for valve replacement devices and pacemakers. Stroke is one of the most frequently occurring cardiovascular disorders amongst the geriatric population, which leads to acute prosthetic heart failure. Dyspnea also leads to such heart failure, which is expected to increase the need for products related to cardiac prosthetics.

Heart valve replacement devices are very effective for cardiovascular diseases, because of its benefits in patients suffering from extensive calcification, congenital malformation, or infection. This is expected to influence the segment to a great extent.

Increasing incidence of heart failure due to stroke and other chronic cardiovascular disorders is projected to result in significant growth of the pacemaker segment. Moreover, introduction of technically advanced products is anticipated to further drive industry growth.

Mechanical valves are one of the largest revenue generating subsegments in 2015. The factors supporting their growth include lifelong solution for the patients due to the durable raw materials used in manufacturing. In addition, polymeric materials are widely used as raw materials, minimizing the clinical problems associated with mechanical valves. There is lesser requirement for repetitive surgeries with this type of valve, which is expected to be an additional factor for accentuating the target market.

Modern implantable cardioverter defibrillator acts as both, a pacemaker and defibrillator. Hence, it is expected to be one of the fastest growing “type” of pacemaker. Furthermore, implantable pacemakers are subsegmented based on chamber-type: single chamber, dual chamber, and triple chamber pacemakers.

North America held the largest share of cardiac prosthetic devices market in 2015 owing to increasing awareness levels amongst the affected population. The American Heart Association is focusing on cardiovascular disease prevention via promotion of positive health. The prevalence of cardiovascular diseases is higher amongst the U.S. children and young adults owing to their unhealthy lifestyle as compared to the aged population. 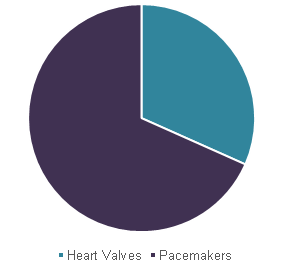 Asia Pacific is anticipated to show lucrative growth with around 9.0% CAGR over the forecast period. This is mainly due to the fact that prevalence of target diseases is increasing at an alarming rate in this region, which in turn is raising the mortality rate. As a result, immense opportunity lies in Asia Pacific region for key industry players to cater to the unmet needs of the target population in this region.

The companies are focusing on new product development, geographical expansion, and mergers & acquisitions. For instance, in 2016, St. Jude Medical announced the launch of Trifecta Valve with Glide Technology in the U.S. They are utilizing advanced technology, which is further expected to foster the growth of the industry.

This report forecasts revenue growth and provides an analysis on the industry trends in each of the sub-segments from 2014 to 2025. For the purpose of this study, Grand View Research has segmented the global cardiac prosthetic devices market on the basis of product and region: