The global cardiac surgery instruments market size was estimated at USD 1.6 billion in 2018 and is projected to grow at a CAGR of 6.6% over the forecast period. According to the American Heart Association, at least 48.0% of adults have some form of cardiovascular conditions in the U.S. Increasing prevalence of the cardiovascular disease, rising incidence of diabetes, growing healthcare investment, and technological advancements can be attributed to growth.

The globally increasing aging population is one of the major drivers of this market. According to WHO, the world’s geriatric population is expected to nearly double from 12.0% to 22.0% between 2015 and 2050. The market is expected to be driven by a vascular malfunction in the geriatric population and a rise in congenital defects. Furthermore, physical inactivity and an unhealthy lifestyle are also increasing the incidence of cardiovascular conditions. 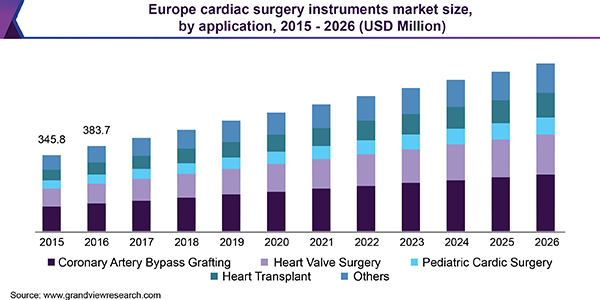 Consumption of junk food, sedentary lifestyle, and mental stress are the primary reasons for heart diseases in individuals around the world. According to WHO, approximately 17.9 million people die from cardiovascular diseases; an estimated 31.0% of all deaths worldwide. By 2030, around 23.6 million people are expected to die due to cardiovascular disorders. Moreover, a substantial number of these deaths may be attributed to smoking and tobacco consumption.

According to the American Heart Association Research, cardiovascular diseases accounted for more than 8 lakh deaths in the U.S. in 2016. It has been observed that these diseases claim more lives than chronic lower respiratory disease and cancer combined. Approximately 2,300 Americans die due to cardiovascular diseases each day; an average of one death every 38 seconds.

Furthermore, there is a shortage of active cardiac surgeons worldwide. These conditions, which currently cause one-third of the deaths worldwide, are likely to remain the leading cause of mortality and morbidity. The number of new cardiac surgeons is anticipated to decrease by 21% over the forecast period, due to declining number of entrants and ongoing retirements. With an increasing number of cardiac surgeries and rising geriatric population, which has a higher predisposition, the demand for cardiac surgeons is anticipated to double over the forecast period, based on growth & aging if current health care demand and service pattern continues. Therefore, this growing demand is expected to create significant opportunities for both doctors and manufacturers in the cardiac surgery instruments market.

Based on the product, the market is segmented into forceps, graspers, clamps, scissors, needle holders, and others. Forceps segment accounted for the largest share and is also projected to experience the highest growth rate. This can be attributed to the rising number of cardiac surgeries and the availability of different types of these instruments, such as grasping & vascular forceps. This growth is further aided by the frequent use of forceps in many cardiac surgeries. The needle holder segment is also held a considerable share and the segment is expected to grow at a CAGR of 8.4% over the forecast period. Needle holders are used by surgeons and doctors for holding a suturing needle for closing wounds. 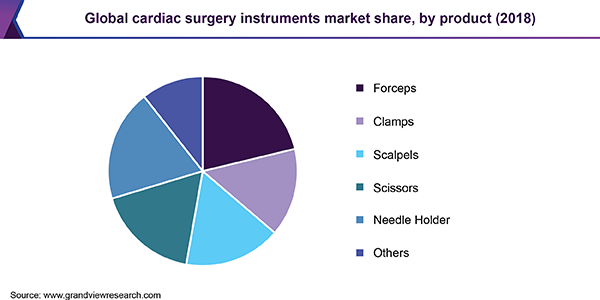 The scissors segment is also expected to grow at a rapid pace and is identified as the second fastest-growing segment after forceps. This market is expected to grow at a CAGR of 6.9% over the forecast period owing to its use in various cardiac surgeries, such as heart transplants and coronary artery, heart valve, and pediatric surgeries. These scissors are available in different sizes and shapes for various types of surgeries.

On the basis of application, the cardiac surgery instrument market is segmented into heart valve surgery, Coronary Artery Bypass Grafting (CABG), pediatric cardiac surgery, heart transplant, and others. CABG dominated the market and is expected to witness lucrative growth over the forecast period. In 2018, the CABG segment captured the highest share and is expected to grow significantly over the forecast period. Coronary artery disease is a narrowing of coronary arteries, caused by a buildup of fatty material within the arteries. The treatment for this condition involves surgical intervention, and hence, the increasing incidence of the disease is anticipated to aid growth.

Heart valve surgery devices are used for treating heart failure, heart stroke, and blood clots. The primary method of treating a diseased heart valve is through open surgery by placing a replacement valve. This is the second largest segment of this market, owing to the increasing number of heart valve surgeries, and is expected to grow at a CAGR of 6.81% over the forecast period. The segment is primarily driven by lifestyle, such as consumption of alcohol & physical inactiveness; hypertension; diabetes; and hyperlipidemia.

By end-use, the market is segmented into hospitals and ambulatory surgical centers. The hospital segment is anticipated to hold the highest share over the forecast period. This can be attributed to well-developed infrastructure, high footfall, and an increase in healthcare expenditure. Moreover, a rise in the volume of surgeries due to the increasing prevalence of heart diseases and other disorders is expected to boost this segment’s growth over the forecast period. The increasing number of medical centers in the world due to government initiatives is also impelling growth. In addition, an increase in the number of operating rooms due to the high demand for cardiac surgeries is aids growth.

Ambulatory surgical centers are also anticipated to grow at a rapid pace over the next 7 years. The segment growth is driven by factors such as shorter hospital stay, low cost of treatment, and same-day surgeries, as well as improvement in ambulatory surgical centers establishments in developing economies. Moreover, these centers have skilled professionals offering preoperative and postoperative services to the patients; hence, the segment is anticipated to grow at a lucrative pace over the forecast period.

North America dominated the market in 2018 owing to a well-established healthcare sector. An increasing number of surgeries and a growing prevalence of cardiac disorders are also expected to drive the region. Moreover, the high adoption of advanced tools and devices for surgeries propels growth. Europe is also expected to capture a significant market share over the forecast period due to the growing geriatric population. Improving the healthcare sector and growing adoption of advanced medical products are further augmenting growth.

Asia Pacific is expected to grow at the highest CAGR. Improvement in healthcare facilities and reimbursement policies in developing economies are key factors aiding growth. China spearheaded this market in 2018, owing to the high geriatric population and a fast developing economy. Furthermore, a growing number of cardiac surgeries are anticipated to support growth during the forecast period.

These players are launching new products & accessories and are involved in technological advancements as well as strategic initiatives, such as mergers & acquisitions. In December 2016, Teleflex Incorporated acquired Vascular Solution, Inc. for USD 56 per share in cash. With the acquisition, Vascular Solution became a wholly-owned subsidiary of Teleflex.

Segment Covered in this Report

This report forecasts revenue growth at global, regional, & country levels as well as provides an analysis on the latest industry trends and opportunities in each of the sub-segments from 2015 to 2026. For the purpose of this study, Grand View Research has segmented the global cardiac surgery instruments market report on the basis of product, application, end use, and region: