The global cartilage repair/regeneration market size was valued at USD 4.2 billion in 2016 and is expected to grow at a CAGR of 5.4% during the forecast period. Rising prevalence of bone and joint disorders, such as Osteoarthritis (OA) or arthritis, and technological advancements in cartilage regeneration are the key drivers expected to nurture market growth worldwide.

There is an increase in the prevalence of OA due to the growing geriatric population and increasing related factors such as obesity. This condition is a major cause of disability in the U.S. and had affected over 20.0 million Americans in 2012; this number is anticipated to reach 40.0 million over the next 10 years. Currently, the disease has affected over 30.0 million U.S. adults. Furthermore, over 12.0 million people suffer from knee pain and visit the doctors in the U.S. Furthermore, OA affects around 15.0 million Indians and arthritis affects around 10.0 million individuals in the UK every year, thereby driving this industry’s growth.

The American Heart Association (AHA) estimated the global geriatric population to account for approximately 20.0% of the total population by 2030, which is prone to develop chronic diseases and is anticipated to be a vital driver of the increase in cartilage repair procedures and is expected to bolster the market over the forecast period.

A surge in the number of road accidents and sports-related injuries worldwide resulting in bone and joint injuries is anticipated to fuel the demand for cartilage repair products over the forecast period. As per data published by the World Health Organization (WHO in November 2016, approximately 1.25 million people die each year in road accidents worldwide.

Around 30.0 million children and adolescents participate in youth sports in the U.S. each year. This increase in sports activity increases incidents of injuries in athletes, which in turn propels the demand for repair products. According to research data by the American Orthopaedic Society for Sports Medicine, over 3.5 million athletes received medical treatment due to sports injuries each year. Also, sports and recreational activities accounted for around 21.0% of all traumatic brain injuries among American children, and 50.0% of head injuries sustained in recreational activities or sports happened during bicycling, skating, or skateboarding in 2015

The key treatment modalities analyzed in this study are cell-based and non-cell-based. The cell-based segment dominated the industry in 2016 and is expected to witness lucrative growth over the forecast period. Increasing preference for autologous chondrocyte transplants for surgical treatment of damaged articular cartilage (chondral and osteochondral lesions) is anticipated to support the market growth.

The application segment includes hyaline and fibro. The hyaline segment is expected to dominate this industry during the forecast period owing to rising incidents of physical trauma across the globe, which may cause osteochondral and chondral lesions in patients. For instance, as per the statistics published by the Centers for Disease Control and Prevention (CDC), around 199,800 people die from fatal injuries every year in the U.S.

The CDC reported that about 2.5 million individuals were hospitalized and 26.9 million patients were treated in an emergency department for nonfatal injuries in 2014. Also, over 33,700 people died in motor vehicle crashes (a major cause of death) and 2,791,000 geriatric patients as well as 325,000 kids were treated for fall injuries in the emergency rooms in the U.S. during the same year. This surge in fatal and nonfatal injuries is expected to support market growth over the forecast period.

The hyaline segment is also expected to be the fastest growing over the forecast period, due to the high susceptibility of damage to hyaline cartilage in case cartilage-related injuries. In addition, the surge in sports-related injuries results in articular cartilage defects of the knee & other joints, and this is expected to support the segment growth.

The palliative segment is further classified into viscosupplementation and debridement & lavage. Viscosupplement involves injecting hyaluronic acid into a joint to replace or supplement synovial fluid for the treatment of OA of the thumb, toe, or other small joints. The viscosupplementation segment is expected to gain market share over the forecast period owing to the increase in OA-induced pain coupled with rising demand for hyaline-like cartilage regeneration. 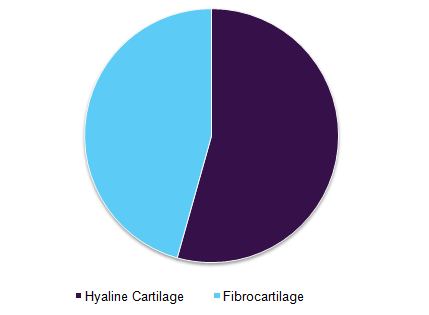 The other segment includes the hip, shoulder, finger, elbow, foot & ankle, and spine. This segment is expected to witness positive growth over the forecast period owing to the rising athletic population coupled with growing sports-related injuries.

North America held around 50.0% share in the cartilage repair market in 2016, owing to the increasing prevalence of musculoskeletal diseases, presence of target population, and changing lifestyle of individuals in the U.S. and Canada. The rising prevalence of osteoporosis in the U.K., Germany, and France is expected to contribute significantly to the Europe market. As per a report by National Health Service (NHS), osteoporosis affects over 3.0 million people in the UK every year; and as per the National Osteoporosis Society (NOS) estimates, 1 in 2 women and 1 in 5 men above the age of 50 years will break a bone as a result of osteoporosis every year.

International Diabetes Federation (IDF) reported about 109.6 million cases of diabetes in China. Also, nearly 7.2 million diabetes cases were reported in Japan, and 1 million cases in Australia. Asia Pacific region is anticipated to exhibit a comparatively higher CAGR over the forecast period, as compared to other regions.

For instance, in February 2012, Zimmer Biomet launched ChondrofixOsteochondral Allograft for early intervention treatment of cartilage lesions in the U.S.

This report forecasts revenue growth and provides an analysis on the latest trends in each of the sub-segments from 2014 to 2025. For the purpose of this study, Grand View Research, Inc. has segmented the global cartilage repair market on the basis of treatment modality, application, treatment type, site, and region: