The global cell counting market size was estimated at USD 5,477.9 million in 2016 and is anticipated to grow at a CAGR of 7.8% during the forecast period. The rise in prevalence of chronic diseases that require next-generation therapeutics is the high impact rendering driver. This upsurge has resulted in extensive research activities that require advanced cell counting instruments. Some of these diseases include cancer, leukemia, HIV, and Alzheimer’s, which drive clinical urgency to develop drugs that possess greater potency.

Cell counting instruments are increasingly being adopted in various areas of research such as cancer biology, immunology, and neuroscience, which exhibits remunerative growth opportunities for the market. The market is also expected to witness exponential CAGR as blood cell counting is imperative for the assessment of various diseases, and its adoption is anticipated to increase over the forecast period. 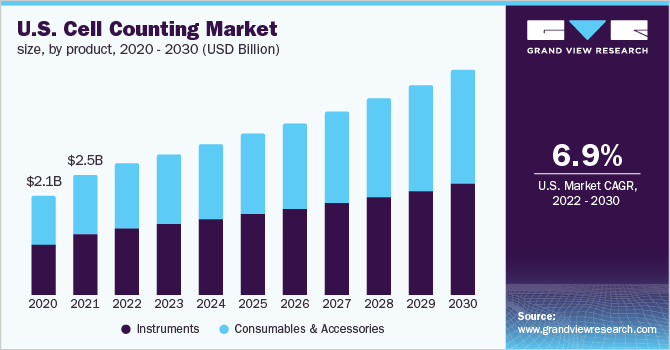 They are extensively used in cancer research to determine intra-tumor heterogeneity, which is essential for the assessment of cancer progression. It helps in the identification and determination of primary tumor, circulating tumor, & metastatic tumor, which is critical for disease monitoring &therapeutic targeting.

In addition, this process has become a part of standard diagnosis in the clinic and hospital settings. The full blood count is done with the help of automated counters and this helps determine the concentration of RBCs, WBCs, platelets, and plasma, which is essential for the identification of certain viruses, bacteria, & pathogens as well as for the evaluation of the immune system.

Growing demand for biologics in chronic disease treatment is further expected to provide significant opportunities for an increase in the adoption of cytometers. Biologics development involves the usage of various instruments, such as flow cytometers and spectrophotometers that control cell concentration, which is anticipated to fuel the cell counting market growth.

Spectrophotometers held a dominant market share in the product segment in 2016. Spectrophotometry has become the method of choice to measure cell concentration and other related applications such as research, therapeutics, and bioprocessing. Increasing acceptance of these instruments can be attributed to their ability to measure different intensities of light accurately. However, the high price of the instrument is anticipated to hinder market penetration to a certain extent during the future period.

Flow cytometers accounted for the second-largest market share in 2016. Flow cytometry is most commonly used for the diagnosis of genetic aberrations in chromosomes. An increase in demand for early diagnosis and growing awareness pertaining to associated benefits of cell-based assays are factors contributing to its dominance over the forecast period.

Automated counters are anticipated to grow at a lucrative rate during the coming years. Automated counters possess the ability to process larger sample sizes at a higher speed in comparison to other available instruments. Moreover, new product development undertaken by prominent players is further expanding prospects for the segment.

In 2016, research and academic institutes accounted for the largest market share in the end-use segment. The dominant share can be attributed to the extensive adoption of cytometers in cell biology research studies. Cytometers find applications in measuring parameters such as physical properties, type, and lineage, which are used by researchers to study the progression of viruses, pathogens, &other bacteria.

Other major research applications include molecular biology, immunology, and pathology. As research and studies in these areas increase over the forecast period, the segment is expected to observe a positive CAGR. Hospitals and laboratories are anticipated to grow at an exponential rate during the forecast period.

The aforementioned factors can be attributed to the increasing usage of cytometers in cytotoxicity screening applications to monitor cell viability. Cytometers are widely accepted instruments for the determination of necrosis and apoptosis, which is also predicted to boost the market during the forecast period.

In 2016, North America accounted for the largest market share owing to the increasing focus on biomedical, stem cells, and cancer research. Rise in prevalence of chronic diseases, such as cardiovascular and blood diseases, is one of the major factors anticipated to fuel the adoption of these devices. In 2017, American Cancer Society, Inc. estimated 1,688,780 new cases of cancer in the U.S. and about 600,920 deaths due to it. This unprecedented upsurge in its prevalence has increased focus on cancer and stem cell research. 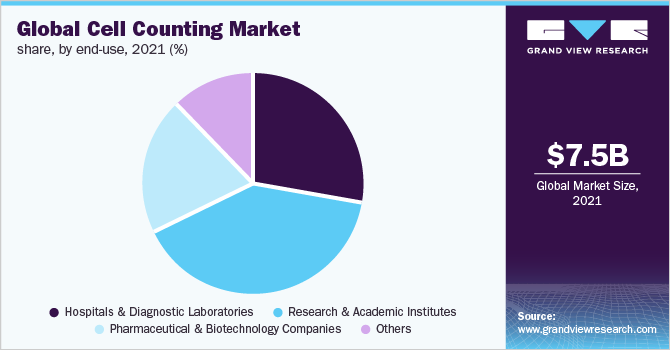 Asia Pacific is expected to grow at an exponential rate throughout the forecast period. This exponential CAGR can be attributed to the local presence of certain clinical research and biopharmaceutical companies across this region. In addition, the availability of skilled personnel, low development costs, vast genome pool, and less complex regulations for drug development are some of the major factors fueling demand across this region.

This report forecasts revenue growth at global, regional, & country levels and provides an analysis of industry trends in each of sub-segments from 2014 to 2025. For the purpose of this study, Grand View Research has segmented the global cell counting market on the basis of product, end use, and region.