The global stem cells market size was estimated at USD 9.6 billion in 2019 and is anticipated to witness a CAGR of 8.2% through the forecast period. Despite being controversial, these stem cells have gained significant attention from the multidisciplinary community of scientists. An exponential rise in stem cell-based research and the huge success of regenerative medicine are expected to fuel market growth.

This technology has gained prominence in the past few years as it is directly linked to the treatment of damaged tissues, diseased organs, and regenerative medicine. Research activities targeted to develop polymeric biomaterial systems have witnessed a rise in recent years. These systems act as a niche that aid the survival of stem cell. 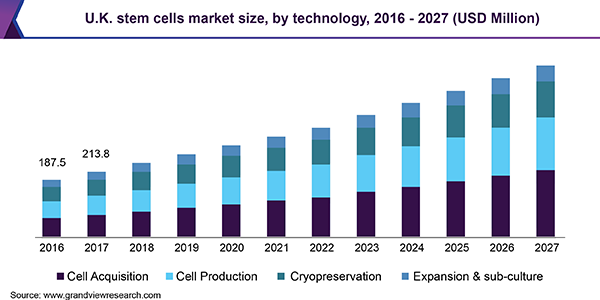 Automation in the adult stem cell and cord blood processing and storage are the key technologies expected to positively influence the growth of the adult cord blood stem cells market. Furthermore, key players in this market are involved in research collaborations to reprogram newborn stem cells from umbilical cord blood as well as umbilical cord tissue into iPSCs.

Moreover, the use of iPSCs to develop stem cell therapies is also on the rise. For instance, in July 2019, Takeda Pharmaceutical Company Limited collaborated with The Center for iPS Cell Research and Application (CiRA) (Kyoto University, Japan) for the development and commercialization of iPS cell-derived chimeric antigen receptor (CAR) T-cell therapy (iCART). The iCART program is expected to enter clinical trials by 2021.

Several cell lines-based influenza vaccines such as PER.C6 based vaccines by Crucell, Vero cell line technology by Baxter, and Madin-Darby Canine Kidney (MDCK) by Solvay are being manufactured. These are instrumental in driving demand for these products for vaccine production. In addition, growing demand for regenerative medicines is also expected to propel market growth.

The adult stem cells segment was the most commonly used product in 2019 and is expected to continue to dominate the market throughout the analysis period. This is attributed to the low contamination risk associated with sub-culturing, compatibility with the human body, and minimal requirement of production labor.

The iPS segment is expected to witness the fastest growth over the forecast period owing to its potential to significantly advance drug development and clinical research. The ability of iPS cells to link disease properties with the physiology of defined stem cells to explore the genetic linkage between diseases and patients for drug discovery is expected to influence the growth of this segment, positively.

Regenerative medicine accounted for the largest market share in 2019 owing to rising adoption and ongoing development of companion diagnostics and personalized medicine for usage in oncology and other chronic infections. Moreover, constant research for the use of these stem cells for the introduction of breakthrough technologies to eradicate the tumor and develop transplant methodologies are also expected to enhance market growth over the forecast period.

Neurology was the highest revenue-generating regenerative medicine segment in 2019 owing to the presence of significant FDA approved products. Neural stem cells can be proliferated, isolated, genetically manipulated, differentiated in vitro, and reintroduced into an altered Central Nervous System (CNS). Moreover, their applicability for the treatment of Parkinson’s, Alzheimer’s, and other neurodegenerative disorders is expected to boost segment growth.

The drug discovery and development segment are expected to exhibit the fastest CAGR owing to ease of programming for the development of cells of the liver, heart, and other human organs to provide an accurate and less expensive drug testing process. Drug manufacturers have adopted these cells for the identification of novel therapies, research, and toxicology testing as stem cell technology can produce cells that are in-line with the gold standard required for drug safety testing.

Being a basic step, cell acquisition technology is estimated to account for the largest share and is expected to maintain this position throughout the forecast period. Growing awareness about the significance of stem cells has led to significant growth in cell harvesting, which in turn, has contributed to its estimated larger share.

Bone marrow harvest is the most commonly used method for the acquisition of cells as the generation of new tissues from bone marrow stem cells is relatively faster. Moreover, bone marrow originated stem cells are comparatively more concentrated than the ones obtained from other sites.

Cell production is anticipated to witness substantial growth in the coming years owing to the introduction of novel reagents and kits that are useful for optimizing the production of stem cells. It involves advanced manufacturing technology for the quantitation of stem cells and the incorporation of improvements using multi-cellular therapy.

Allogenic therapy accounted for the largest revenue share in 2019 and is expected to maintain its dominance throughout the forecast period. Allogenic cells have an advantage as they produce their own immune stem cells, which kill the cancer cells that remain even after high-dose treatment with cytotoxic drugs. This response is called a graft-versus-cancer effect and is used in the treatment or prevention of cancer relapse. 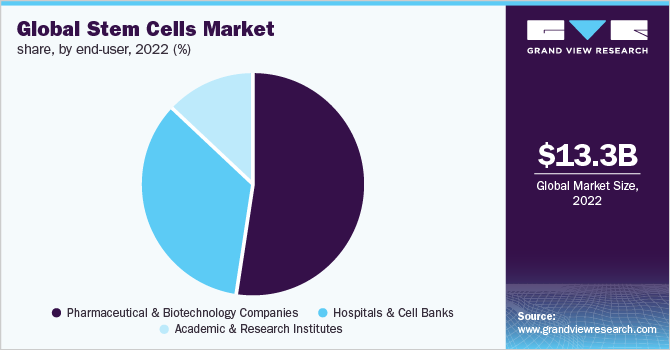 Incidence of cancer relapse is reported to be increasing; generally, it occurs within a period of 6 months to 1 year after therapy. These recurrences are usually observed in children and patients suffering from breast and oropharyngeal cancer. Allogenic transplantation is recommended for patients with a high risk of relapse after successive courses of induction chemotherapy. Thus, an increase in the incidence of cancer relapse has fueled the demand for allogeneic therapies.

Autologous therapy segment is expected to grow at a lucrative rate throughout the forecast period. This is primarily due to the low risk of complications associated with autologous treatment. Other factors anticipated to propel the growth of this segment include affordability, the improved survival rate of patients, no need for identification of an HLA-matched donor, and no risk of graft-versus-host diseases.

North America accounted for the largest share in the market in 2019 due to high R&D investments in cytological research. Increasing market adoption of stem cell therapies, strong reimbursement framework, and advanced healthcare framework are factors accounting for market dominance in this region. The U.S. is the leading country in research as opposed to other countries owing to the presence of major biotechnology companies, extensive government funding, and increasing research in the area.

Europe is known for its exceptional research quality, followed by China. The Asia Pacific region is expected to grow at a lucrative pace owing to strong product pipelines in cell-based therapies and a large patient population. Japan was one of the pioneers in the field of iPS research. HEALIOS K.K., a Japan-based pharmaceutical company is one of the first companies to test the iPS-based treatment in the country. The company expects the commercialization of its product by 2022. Such initiatives are expected to boost revenue generation in the region.

These companies are focused on the expansion of their offerings through extensive R&D and the formation of alliances and partnerships with other major players to sustain their market position. For instance, in June 2019, Evotec SE expanded its collaboration with Celgene to include a new iPSC, targeted toward discovering disease-modifying treatments for patients suffering from neurodegenerative diseases.

Similarly, in January 2019, Cesca Therapeutics completed the acquisition of ThermoGenesis Corp., making it the wholly-owned subsidiary of the Cesca Therapeutics. This acquisition was aimed at developing and commercializing automated technologies and medical devices incorporated in the therapies.

This report forecasts revenue growth at global, regional, and country levels and provides an analysis of the latest industry trends in each of the sub-segments from 2016 to 2027. For the purpose of this study, Grand View Research has segmented the global stem cells market report on the basis of product, application, technology, therapy, and region: