Rising adoption of telomere performance programs is one of the key factors propelling the demand for cellular health screening. According to a research study conducted by the University of Utah GSLC, researchers were able to achieve the blocking of telomerase activity in prostate and breast cancer cells that were cultured in the laboratory. It thereby lead to death of tumor cells. Therefore, researches conducted by various institutes can lead to rise in the use of telomere test kits in cellular health screening and other application areas. 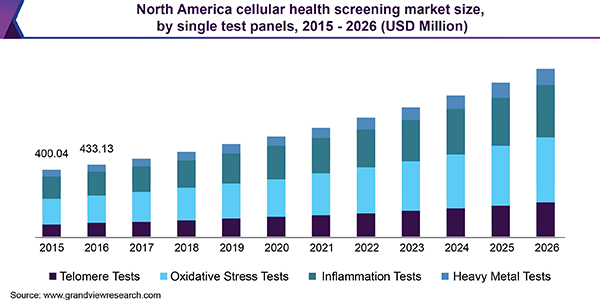 Increase in awareness related to importance of healthy adjusted life expectancy (HALE)is anticipated to be one of the major factors boosting the market potential for cellular health screening during the forecast period. According to WHO, in 2015, the global HALE in males and females at birth was 63.1 years collectively, 8.3 years lower than total life expectancy at birth. This is attributed to the poor health of people across the globe. Thereby, a growing need for better HALE is driving demand for cellular health screening tests.

According to the Centers for Disease Control and Prevention (CDC), life expectancy for people in the U.S. has decreased from 78.9 years in 2014 to 78.6 years in 2017. CDC states that life expectancy has decreased due to the high incidence of a drug overdose and prevalence of chronic diseases, resulting in early death. An increase in investments to improve the healthcare sector is another factor anticipated to drive the market for cellular health screening. According to the India Brand Equity Foundation (IBEF), India attracted 88 funding deals worth USD 397.41 million for the healthcare sector in 2016.

The rise in government initiatives for preventive healthcare is one of the factors anticipated to drive growth. For instance, in 2018, the government of India launched an initiative named ‘Ayushman Bharat Yojana’ to improve HALE and provide easy access to healthcare services. The rapid increase in chronic diseases is also one of the drivers anticipated to fuel demand for cellular health screening tests. According to the National Cancer Institute, in 2018, an estimated 1,735,350 new cancer cases were recorded in the U.S. Factors such as these are expected to create a rise in awareness regarding cellular health screening tests to prevent cancer at an early stage.

Other factors anticipated to fuel market growth are an increase in the need for cellular health screening, a rise in research activities, and a rapidly growing adoption of direct to customer approach.  However, differences in the costs of kits offered by market players and problems associated with the transport of samples may restrain the growth of the market for cellular health screening.

Based on the test type, the market is segmented into a single test and multi-test panels. The single test panels segment is further segmented into telomere, oxidative stress, inflammation, and heavy metal tests. Telomere tests held the largest market share in 2018 due to a rise in the geriatric population. As individuals age, the length of telomere of the cell shortens, which is indicative of various health problems such as heart diseases. The advent of cellular health screening tests, including telomere tests, has facilitated individuals to check their cellular age and thereby take preventive measures to reduce telomere shortening. According to UNFPA, in 2017, the aging population was 11.5% of the world’s 7 billion people, which is expected to rise to 22% in 2050. Thus, an increase in the geriatric population is also one of the factors that will fuel the growth of the telomere tests segment, globally.

The rise in adoption of direct to customer approach by leading market players are anticipated to drive the cellular health screening market. For instance, in 2015 Titanova Inc. launched an at-home telomere testing device that is saliva based. This kit helps in performing cellular health screening tests to measure the length of the telomere at home, thereby preventing diseases.

The rise in research initiatives taken by governments is anticipated to propel market growth. For instance, in 2017, the NCBI published a report wherein oxidative stress levels are used to understand the pathophysiology of male infertility and provide information regarding treatment decisions. Thus, rising research pertaining to the segment is expected to create significant demand for cellular health screening tests.

Hospitals held the largest market share in 2018 as they facilitate primary treatment and diagnostics for a majority of the population. Diagnostic tests related to cellular health screening for most of the in-patient population are typically conducted in hospitals and clinics as physicians recommend reliable diagnostic processes for testing as well as sample collection. Therefore, hospitals are expected to fuel market growth owing to the presence of trained professionals who facilitate easy and safe sample collection and testing processes.

Home settings are also expected to show exponential growth during the forecast period owing to the availability of therapeutic and diagnostic products such as rapid diagnostic tests that do not require specialized lab infrastructure and professional training. Thus, the easy availability of RDTs for cellular health screening and sample collection is expected to positively impact market growth during the forecast period.

Based on the sample type, the market is segmented into blood, urine, saliva, and serum. Blood-based tests held the largest market share in 2018 due to a rise in the adoption of direct to customer approach by leading market players. For instance, in 2018, LabCorp Holdings announced that they will be introducing a blood-testing device that can be used at home to perform cellular health screening tests. The company also provides at-home services by offering products such as saliva-based genetic test. Therefore, a rise in-home care settings will boost the market for cellular health screening due to its ease of use. 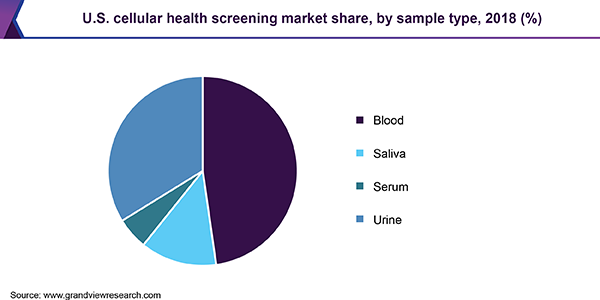 Genova Diagnostics offers Oxidative Stress Analysis 2.0 that evaluates oxidative stress status in the body. This test uses urine as a sample to detect two key biomarkers –lipid peroxides and 8-OHdG – that cause oxidative stress damage. Measurement and detection of oxidative stress biomarkers using urine as a sample is both non-invasive and patient friendly, facilitating easy evaluation of damage caused by free oxygen radicals. Thus, the use of non-invasive tests to detect oxidative stress in the body is also expected to boost market growth during the forecast period. In oxidative stress testing, urine sample collected over 24 hours is preferred over serum sample as it enables accurate measurement of system functions. In addition, urine-based testing averages out the circadian rhythm and eliminates errors that usually occur with serum testing.

North America held the largest revenue share in 2018 due to rise in awareness regarding HALE, which has dipped in recent years. According to WHO, China’s life expectancy has exceeded that of the U.S.; HALE for males and females at birth in China is 68.7, whereas in America it is 68.5. This decrease in HALE in the U.S. is primarily due to the adoption of unhealthy lifestyles and poor cellular health in the nation. Thus, with growing awareness and the resultant increase in people opting to undergo cellular health screening tests, the North America market will continue to receive a major boost. Other factors leading to regional market growth are rising government focus on preventive healthcare, increase in R&D activities, rise in chronic diseases, and the presence of local players operating in the region.

According to the European Commission, the working population of Europe will decrease from 333 million in 2016 to 292 million in 2070 due to low HALE, owing to adoption of unhealthy lifestyles. The old-age dependency ratio of Europe has increased by 21.6% from 29.6% in 2016 and is expected to reach 51.20% in 2070. Thus, low life expectancy, rise in aging population, and an increasing number of individuals opting for preventive health measures are expected to facilitate consumption of cellular health screening test kits.

Asia Pacific is also expected to witness steady growth due to rise in government initiatives for preventive healthcare. For instance, the government of Andhra Pradesh, India maintains a portfolio named Happiness Index that records data pertaining to the health of people living in the state. The government has taken this approach to encourage individuals to undertake preventive measures against various health issues.

The Middle East and Africa region is also expected to grow at a lucrative rate due to rise in incidence of chronic diseases. According to NCBI, in 2018 cancer rates in UAE were estimated to be 70.1 in males and 74.2 in females per 100,000 individuals. Rise in the prevalence of chronic diseases is thus anticipated to create a demand for cellular health screening tests.

This report forecasts revenue growth at global, regional, and country levels and provides an analysis of the latest industry trends in each of the sub-segments from 2015 to 2026. For the purpose of this study, Grand View Research has segmented the global cellular health screening market report on the basis of test type, sample type, collection site, and region: