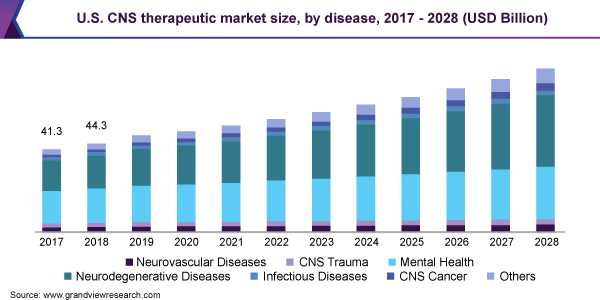 Rising approval of generic products owing to patent expiration of key products, such as Copaxone and Invega, has led to an increase in treatment rate, especially in low- and middle-income countries. For instance, in 2018, the FDA approved two new generic forms of Copaxone, which is further expected to increase competitive rivalry in the market for central nervous system therapeutic. Regulatory guidelines and critical clinical trials are encouraging the entry of new products into the market for central nervous system therapeutic. These drugs are monitored for their efficacy, dosage, formulation, and aftereffects. For instance, the U.S. FDA has designated CNS Pharmaceuticals’ berubicin as an orphan drug for the treatment of patients with malignant gliomas.

The presence of strong pipeline products is expected to propel the market for central nervous system therapeutics over the forecast period. The key pharmaceutical players are focusing on new therapies to prevent or improve the symptoms of neurological disorders. Companies such as Biogen, AbbVie Inc., F. Hoffmann-La Roche Ltd, Eli Lilly and Company, and others have their drug candidates in the last phases of the development and are expected to be commercialized in the foreseeable future. The launch of these novel drugs is anticipated to boost the market for central nervous system therapeutic. Most of the drugs in the development aim to interrupt the disease process by impacting the brain changes associated with diseases.

The increasing awareness regarding mental health and neurodegenerative diseases by government and non-government organizations is anticipated to increase the treatment rate globally. Organizations such as WHO and others conduct various awareness programs to increase awareness among people living with central nervous system disorders. Furthermore, the Spanish government has launched a national plan to tackle dementia that includes key targets for improving dementia awareness, patient-centric health and social care, and promotion of research and innovation. The focus on neurodegenerative disease research is higher in Spain.

Mental health was estimated to be the second-largest segment in the central nervous system therapeutic market. High patient base of anxiety disorder and epilepsy are the major growth contributors. Moreover, the presence of strong pipeline drugs for the treatment of psychotic disorders is anticipated to drive the market for central nervous system therapeutic at a lucrative rate over the forecast period. 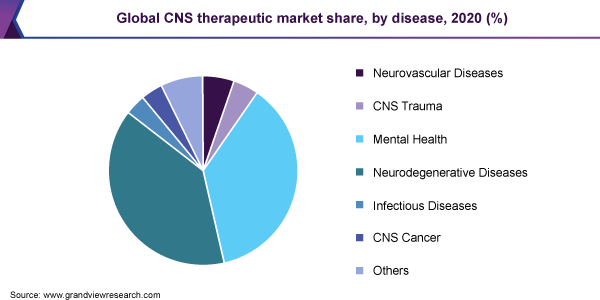 CNS cancer is expected to be the fastest-growing segment over the forecast period and is projected to exhibit a CAGR of 10.1%. Its high growth rate can be attributed to increasing prevalence and mortality and growing demand for treatment. For instance, around 70,800 people in the United States are diagnosed with brain cancer every year, which represents 1.4% of the total cancer incidence and causes about 2.4% of all cancer deaths in the U.S. GBM is the most common brain cancer and accounts for more than half of all brain cancers. In 2018, around 300,000 people were diagnosed with brain cancer worldwide and caused deaths of nearly 240,000 in the same year. Also, constant R&D efforts by pharmaceutical companies, coupled with increasing investment by government and private entities, are expected to support the adoption of CNS drugs in cancer treatment.

The neurodegenerative diseases and mental health segments collectively held more than 75.0% share of the market. High prevalence and technological collaborations are factors that can be attributed to the largest share of these segments and will continue to show its dominance over the forecast period. For instance, in January 2021, Atalanta Therapeutics has collaborated with Biogen and Genentech for the development of RNAi therapeutics for the treatment of Alzheimer’s disease, Parkinson’s disease, and Huntington’s disease.

North America dominated the market for central nervous system therapeutic and held the largest revenue share of 47.3% in 2020. The presence of strong players in the region and rising initiative undertaken by key players to develop novel therapies for different central nervous system disorders are factors expected to increase the overall market share. Moreover, the constantly rising incidence of mental health and neurodegenerative disorders such as multiple sclerosis, Alzheimer’s, Parkinson’s disease, and epilepsy is fueling the demand for central nervous system therapeutics in the North America region. Awareness campaigns about diagnosis and treatment of CNS diseases run by pharmaceutical companies and better reimbursement policies for the CNS diseases treatment increase the treatment rate in the region.

In Asia Pacific, the market for central nervous system therapeutic is expected to grow at the highest rate over the next eight years. Improving healthcare infrastructure in emerging markets such as India and China and a large patient base with high unmet medical needs are some factors expected to drive treatment adoption rate during the forecast period. Moreover, increasing awareness regarding mental health and initiatives of the government and non-profit organizations are increasing market growth. In countries like China and India, many non-profit organizations offer treatment for patients living with central nervous system disorders.

Large pharmaceutical companies are highly investing in the development of novel therapies to treat central nervous system diseases. In February 2020, Biogen announced USD 2.72 billion deal with Sangamo Therapeutics to develop gene regulation therapies to treat Alzheimer’s disease. Some of the prominent players in the central nervous system therapeutic market include:

This report forecasts revenue growth at global, regional, and country levels and provides an analysis of the latest industry trends in each of the sub-segments from 2017 to 2028. For the purpose of this study, Grand View Research has segmented the global central nervous system therapeutic market report on the basis of disease and region:

How big is the central nervous system therapeutic market?

What is the central nervous system therapeutic market growth?

b. North America dominated the CNS therapeutic market with a share of 47.4% in 2020. This is attributable to the rising number of reported cases of neurodegenerative disorders & mental health and the high adoption of advanced therapeutics.

Who are the key players in the central nervous system therapeutic market?

What are the factors driving the central nervous system therapeutic market?