The global cerium market size was valued at USD 253.4 million in 2020 and is expected to grow at a compound annual growth rate (CAGR) of 3.8% from 2021 to 2028. The cerium market is projected to witness moderate growth, as demand for rare earth elements has been witnessing a positive trend in end-use industries. 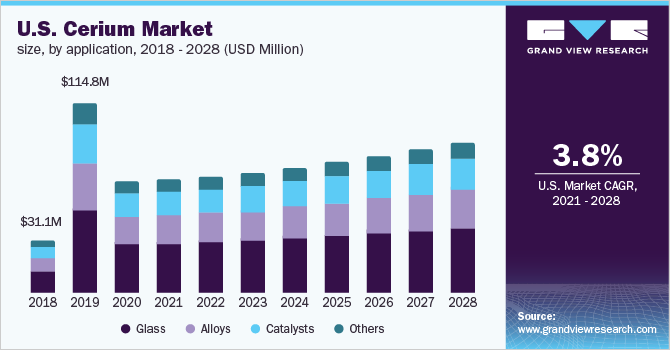 Cerium is the most abundant rare earth element found on the earth. It is soft and ductile with silvery-white color. It is a member of the lanthanide series and was first discovered in 1803. Cerium and other lanthanide members naturally occur in an array of minerals such as phosphates (e.g., Monazite), carbonates (e.g., bastnaesite), silicates, cerite, and oxides. However, monazite and bastnaesite are the most common mineral resources for commercial applications.

Initiatives by the U.S. government to expand the local rare earth elements industry is projected to create a positive impact on the cerium market. The new government of the country is looking to revamp its semiconductor industry through USD 2 trillion infrastructure investment. In February 2021, the government ordered to review gaps in the domestic supply chains for rare earth elements.

Also, in March 2021, the U.S. Department of Energy announced USD 30 million in funds for the exploration of rare earths. These funds are likely to assist in researching and securing the local supply chains for rare earth and other important elements used in battery and industrial applications. States such as California, Texas, and Wyoming are likely to remain in focus for the exploration of rare earth elements over the coming years.

The extraction of rare earth elements is likely to remain a challenge due to a combination of technical, environmental, and political factors. Many regions such as North America and Europe have abundant resources, but lack expertise and skill compared to countries such as China in exploration and processing. This is likely to hinder the cerium market growth over the shorter term.

Glass was the largest segment in 2020 and accounted for a revenue share of over 41% in the same year. Cerium is mainly used for glass polishing applications owing to its physio-chemical properties. Glass polishing powders lose their ability to polish gradually during the application owing to an accumulation of other compounds on powders.

Demand for cerium-based glass polishing powders is projected to increase on the account of increasing usage of liquid crystal displays, glass display panels, precision glass lenses, silicon wafers, glass magnetic memory disks, and other industrial glass applications. The energy-saving lamp is another key application of cerium, which is anticipated to create new avenues for market participants.

Catalysts application segment is projected to grow at a CAGR of 3.7% from 2021 to 2028. Internal combustion vehicles emit harmful gases such as nitrogen oxide, carbon monoxide, and various hydrocarbons. These emissions are purified with the help of different catalysts, wherein cerium is added to improve the rate of purification. Stringent regulations enforced by various governments to curb pollution are likely to play a key role in the growth of the segment.

In terms of revenue, Europe is anticipated to grow at a rate of 3.2% from 2021 to 2028. Recycling of rare earth elements is projected to create new avenues for market vendors, as recycling is limited in Europe and North America, compared to China and Japan. Recently in May 2021, the Environmental Department of the Gipuzkoa Provincial Council, Spain, and the Ceit Technology Centre has formed a partnership to develop a recycling process for rare earth elements from electronics. This is likely to benefit in reducing the dependence on foreign imports of rare earth elements. 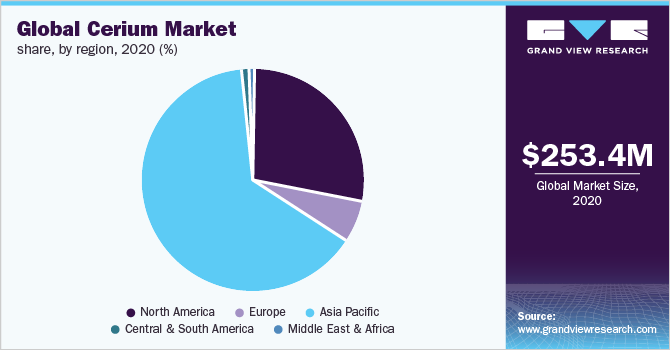 Asia Pacific dominates the market with a volume share of over 78% in 2020, the region is also anticipated to remain the fastest-growing market around the world. This growth is likely to be led by China, which is the leading producer and consumer in the industry. China’s cerium market is likely to witness moderate growth over the short term, owing to abundant supply. Japan is likely to explore the possibilities of rare earth elements, as the government seems to reduce its dependence on China. As per the UN data, Japan reduced its China imports to 58% from 90% in the last decade.

Owing to limited supply and the rise in prices of cerium oxide, vendors in the value chain are likely to expand in the recycling of used products. Also, some of the vendors in the value chain are looking to develop efficient polishing processes that require a fewer amount of cerium products. These processes require a small amount of slurry and also have shorter polishing times. It also helps in the reduction of cerium use by around 30 to 50%.

Government push to explore the possibilities of rare earth elements in various countries is likely to offer opportunities for new players. Countries such as U.S. and Japan are working on increasing their local production and reducing their dependence on Chinese imports. Rare earth elements including cerium being critical material for industrial applications are projected to observe new investments over the coming years. Some of the prominent players in the cerium market include:

This report forecasts revenue growth at the global, regional, and country levels and provides an analysis of the latest industry trends and opportunities in each of the sub-segments from 2017 to 2028. For the purpose of this study, Grand View Research has segmented the global cerium market report on the basis of application and region:

How big is the cerium market?

What is the cerium market growth?

Which segment accounted for the largest cerium market share?

b. The Asia Pacific dominated the cerium market with a volume share of over 78%, driven by the dominance of China in the rare earth elements industry and large volume industrial demand.

Who are the key players in the cerium market?

What are the key factors driving the cerium market?

b. The key factors that are driving the cerium market are stringent regulations for automakers to reduce vehicle emissions and rising demand for glass polishing in electronic applications.