The global rare earth elements market size was valued at USD 2.80 billion in 2018 and is estimated to witness a CAGR of 10.4% from 2019 to 2025. Cerium, neodymium, lanthanum, praseodymium, yttrium, and dysprosium are the most commonly used rare earth elements. The market is driven by the increasing demand for these products in the manufacturing of magnets & catalysts for the automotive industry. Cerium is widely used as a catalyst in catalytic converters of motor vehicles while neodymium & praseodymium are used in the production of batteries for electric vehicles.

As per the International Energy Agency, the global stock of electric cars was over 5 million in 2018 with more than a 63% increase from 2017. Rising demand for electric vehicles to reduce CO2 emissions is expected to propel the use of permanent magnets in the production of batteries. Neodymium and praseodymium based rare earth permanent magnets are majorly used in the manufacturing of batteries. 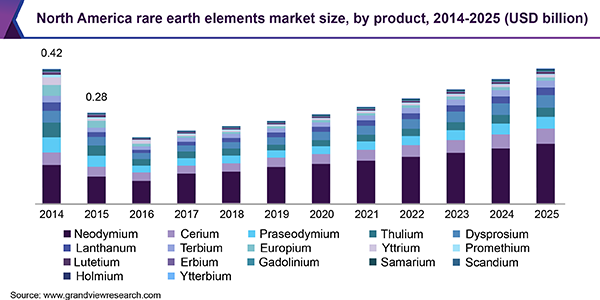 The sales of the overall automotive industry increased by 3% from 2016 to 2017 as per the data published by OICA. The increasing demand for automobiles enables the manufacturers to maintain the supply-demand balance, thus increasing the production. This is expected to boost the demand for catalytic converters as they are used to reduce harmful vehicle exhaust emissions, thereby propelling the utilization of rare earth elements over the coming years.

Cerium and lanthanum catalysts are used in petroleum refining to convert crude oil into gasoline. Fluid catalytic cracking (FCC) uses the catalysts to prevent metal deactivation and to stabilize the zeolite structure during the conversion of crude oil. The sales volume off FCC increased by 3.2% from 2017 to 2018. This is anticipated to drive the demand for catalysts, thereby fueling the market growth over the forecast period.

China is the major producer and consumer of rare earth elements. To maintain self-sufficiency and to meet future demand, China has been raising the export tariffs on rare earth elements shipped to various countries including the U.S., Japan, India, Brazil, and the European Union. This led to the supply-demand gap in these countries as they majorly rely on the imports from China.

Cerium was the leading segment accounted for 42.87% volume share in 2018. The growth in the automotive industry is anticipated to drive the demand for cerium and, in turn, the cerium market. Cerium is used as a catalyst in the automotive industry in catalytic converters in exhaust systems to decrease emissions. Also, it is used in nickel-metal hydride batteries. The growing demand for hybrid vehicles is expected to have a positive influence on demand for rare earth over the forecast period.

Dysprosium is majorly used as an alloying agent in neodymiumâ€ironâ€boron (Neo) permanent magnets. Neo magnets are widely used in various end-use industries including transportation, power generation, aerospace, medical, defense, and industrial. The increasing demand for neo magnets is expected to drive the dysprosium market over the forecast period.

Gadolinium is expected to be driven by its increasing demand for nuclear reactors. It is used as a neutron absorber in the fresh fuel to control and regulate the reactivity of the nuclear reactor core. The nuclear energy market is witnessing several investments, which is leading to increasing demand for gadolinium. For instance, in December 2018, the Department of Energy's Oak Ridge National Laboratory (ORNL) announced plans about its collaboration with six new industry projects for advancing commercial nuclear energy technologies. These collaborations are going to be supported by the Department of Energy (DOE), which has announced funding of USD 14 million for research in fusion energy and USD 18 million for transformative energy technologies.

Praseodymium is anticipated to grow at a CAGR of 6.4%, in terms of volume, from 2019 to 2025. It is used as an alloying agent with magnesium to produce high strength metals for aircraft engines. An increasing number of travelers in different parts of the world are expected to augment the demand for aircraft. In February 2017, GE Aviation, a subsidiary of General Electric invested USD 4.3 billion to increase the production capabilities of aircraft engines. This is anticipated to propel the demand for praseodymium over the forecast period.

The magnet was the largest application segment in terms of volume and revenue in 2018. They are used in various applications such as in computer hard disc drives, linear actuators, servo motors, speakers & headphones, and sensors. The increasing demand for magnets in automobiles, turbines, and consumer electronics is anticipated to boost the consumption of rare earth elements over the forecast period.

Ceramics application is projected to grow at a CAGR of 7.0%, in terms of revenue, from 2019 to 2025. Yttrium, lanthanum, cerium, neodymium, and praseodymium are majorly used in the ceramics industry for applications such as tiles, electronics, and engineering. Cerium oxide is used as an opacifier and to provide glaze to the ceramic tiles. According to the data published by the Ceramic World Web, the production of ceramic tile increased by 2.2% from 2016 to 2017. Increasing production of ceramics owing to the growing construction activities in developing countries is anticipated to have a positive impact on the rising utilization of rare earth over the forecast period. 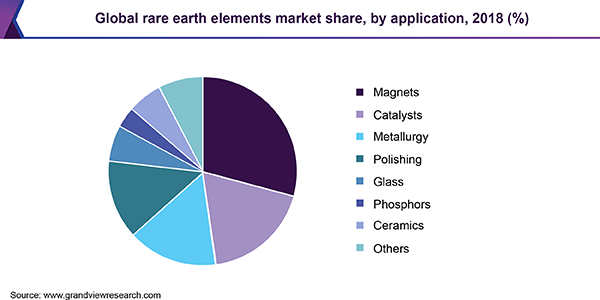 The polishing segment accounted for a volume share of 15.7% in 2018. The segment is driven by the increasing production of glass products. Polishing is used for two purposes, surface smoothening and weight reduction. Cerium oxide is the most widely utilized compound in this application segment. It is used for thinning and smoothening the interior pieces of glass supporting the liquid crystal media, which leads to a reduction in the weight of the screen and allows an increase in the size of the end-products such as LCD TVs.

North America is anticipated to grow at a CAGR of 8.2% in terms of revenue from 2019 to 2025. Growing demand for rare earth can be attributed to the expanding automotive industry in the region. For example, in 2018, Tesla, a leading American electric car manufacturer, announced about using neodymium in its Model 3 Long Range cars. This step is anticipated to spur the demand for neodymium over the forecast period.

Growing consumer electronics and nuclear energy industries are also anticipated to propel the demand for rare earth over the forecast period. The U.S. is the largest producer of nuclear power accounting for more than 30% of the world’s electricity generation. Two nuclear reactors are under construction in the country according to the World Nuclear Association. The growing need for nuclear reactors is expected to augment the market growth in the region.

In Europe, the demand for rare earth is expected to grow owing to their rising applications in magnets, metallurgy, catalysts, glass, and ceramics. The automotive industry is the major end-user of rare earth in Europe. According to OICA, Europe emerged as the second-largest producer of motor vehicles in the world and accounted for a share of 22.3% in 2018. This is anticipated to propel the demand for rare earth in the region.

The Asia Pacific was the leading producer and consumer of rare earth with a market volume share of 71.5% in 2018. Consumer electronics and automotive industry hold significance in Asia Pacific rare earth elements market. This is owing to the rising application of rare earth in magnets for manufacturing batteries in the electric vehicles and polishing of television glass to smoothen the surface & reduce the weight of the product. Companies such as Skyworth, TCL, Xiaomi, BPL, and Thomson have started expanding their capabilities to manufacture components of television in India.

Growing demand for smartphones, high bandwidth capacities, and high-speed connectivity is likely to fuel the demand for optical fiber cables in India. Moreover, government initiatives such as Smart Cities Vision and Digital India are anticipated to boost the demand for the internet which in turn is expected to propel the utilization of fiber optics over the coming years. Neodymium, erbium, and holmium are being increasingly used to manufacture high-efficiency fibers, which are called active fibers. The beneficial properties of rare earth elements including high electrical conductivity, heat resistance, and magnetism are likely to fuel their utilization in electronic devices such as loudspeakers, cell phones, LEDs, etc. over the coming years.

Mergers & acquisitions and new capacity expansions are amongst the key strategies adopted by the major players of the market. In November 2018, Arafura Resources Ltd announced its plans to build a separation plant for its Nolans Neodymium-Praseodymium (NdPr) Project. This plant will be located in Australia’s northern territory and shall convert mixed rare earth intermediate products into refined NdPr Oxide.

This report forecasts revenue and volume growth at regional levels and provides an analysis of the industry trends in each of the sub-segments from 2014 to 2025. For this study, Grand View Research has segmented the global rare earth elements market report based on product, application, and region:

China being one of the major producers of the product has led ta severe dent in the supply chain with prices constantly increasing for the end-product. We at GVR are trying to quantify the impact of this pandemic on the rare earth elements market. Get your copy now to gain deeper insights on the same.