The global chlorine compressor market size to be valued at USD 83.7 million by 2025. The compressors are among the essential components in chlorine (Cl) production plants as well as for further processing of chlorine in the industries. These compressors regulate the chlorine pressure and ensure a controlled flow rate in industries. Chemical production is expected to witness proportional growth over the forecast period owing to the growing demand for PVC. The extensive use of Cl both as raw material and an essential ingredient in the production of organic & inorganic chemicals and paper & pulp is most likely to cement the market growth over the forecast period. The water treatment projects mainly in North America, Europe, and Asia are further likely to trigger steady growth over the forecast period. 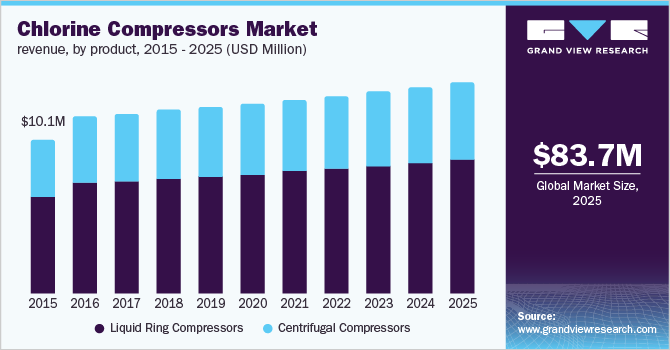 The global chemical industry is witnessing progress in terms of sales and revenue. In addition, the global chemicals are displaying omnipresence across all end-user material front. Chlorine plays an integral role in the chemical industry. It is an important inorganic chemical along with fluorine and bromine. As per the United Nations Environment Program (UNEP), China was the biggest producer as well as consumer and accounted for around 65% of the chemical production across the globe as of 2016.

The North American industry is mature in nature. The demand for chlorine in the region is expected to recover in the next few years but is unlikely to go above the levels that were recorded before the 2008 economic recession. The production of chlorine in the U.S. is majorly done via diaphragm cell despite mercury and membrane cells dominating the market in Europe.

The supply-demand scenario is directly related to the requirement of Cl in various end-use applications across the globe. During the forecast period, production is expected to be slow owing to environmental regulations related to chlorine, especially in Europe. The European industry has already made a voluntary agreement to phase out mercury-based technology, which accounts for around 20% of the capacity. This technological shift is likely to affect product growth.

Major industry participants, such as Gardner Denver Nash LLC. and Mikuni Kikai Kogyo Co., Ltd., have established themselves as manufacturers and suppliers. Small enterprises enter the chlorine compressor market space by establishing themselves as dealers. These dealers facilitate key manufacturers to display their products, thus saving on facility costs.

As the number of applications for chlorine compressors expands around the world, the market is expected to witness considerable growth in the near future.The chemical pursuit allows compounds to be made using a substantial percentage of recurrent system elements. Compressors for chlorine play a critical role in the transmission and recycling of chlorine.

In terms of revenue, the liquid ring compressor is leading the market, and it is expected to retain its dominance during the forecast period as these compressors have the ability to handle chemicals in their liquid forms.

Chemical leasing, on the contrary, is expected to hamper the market growth during the forecast period. The product types that could be studied in chlorine converters during the projected timeframe include compressors with longitudinally split casings and liquid ring converters with horizontal split and casing. 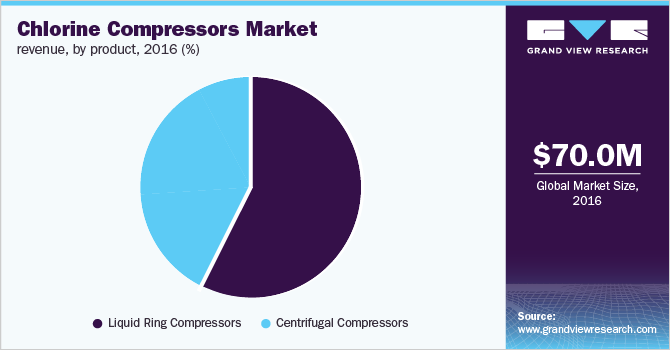 The consumption of liquid ring and centrifugal compressors is essentially dependent on the plant size & capacity and also on the grade of Cl manufactured. The demand is dependent on the complexity of Cl plant and the discharge pressure desired to be achieved.

The margins for PVC producers in North America are anticipated to be ranged from USD 200 to USD 300 per ton over the forecast period. North America is likely to gain advantage owing to factors such as the availability of ethylene and low electricity prices, which is half as compared to the prices in Europe. 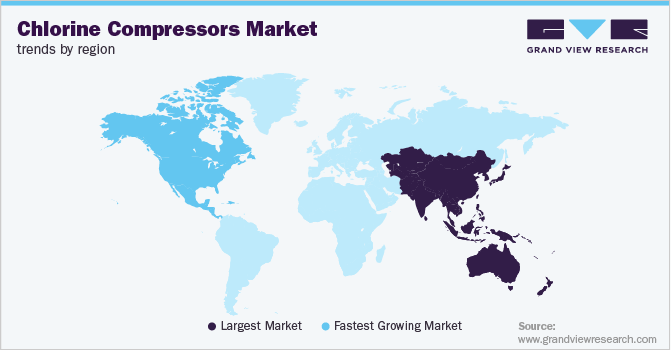 Furthermore, the economic recovery is likely to boost the domestic consumption, and construction spending is slated to strengthen PVC demand in North America. The availability of a mature chlorine production infrastructure coupled with the proposed capacity addition for catering to the PVC industry demand in Asia Pacific is expected to positively influence the requirements for these compressors in the coming years.

The industry is fragmented in nature. Key players invest significantly in research and development activities to develop compressors with different capacity. This helps them in product line extensions. The drive to enhance product features and performance drives the industry participants to remain competitive. The industry is anticipated to be competitive owing to rising need for chlorine in various end-use applications.

The supplier power is expected to be moderate. Availability of raw materials and their fluctuating prices owing to macroeconomic factors are anticipated to play a crucial role in business profitability. Key players sign contracts with suppliers in order to enter new regions for their products without establishing new production facilities.

The threat of substitutes is expected to be low in the market. Companies providing packages for both filtration equipment and compressors are anticipated to achieve a competitive edge. Good after sales service and maintenance is likely to play a key role.

This report forecasts volume & revenue growth and provides an analysis on the latest trends in each of the sub-segments from 2014 to 2025. For the purpose of this report, Grand View Research has segmented chlorine compressors market on the basis of product and region: 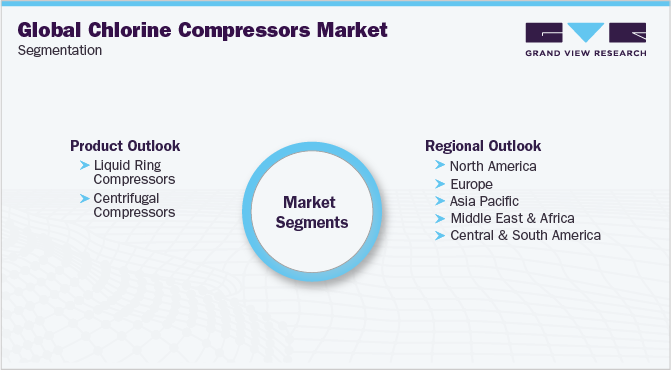