The global polyvinyl chloride market size was estimated at USD 56,304.9 million in 2016. The demand for polyvinyl chloride (PVC) in construction applications is likely to remain strong owing to its cost-effectiveness, resistance to chemical corrosion, and durability. Increasing use of unplasticized PVC as a substitute for painted wood in window frames and sills will boost demand for construction over the forecast period.

Demand for polyvinyl chloride in consumer applications such as furniture, clothing, footwear, and sportswear will present an immense opportunity in the near future due to its low cost and water resistance compared to leather and rubber. Increasing disposable income in emerging economies of Brazil, China and India have been acting as one of the major factors driving demand in consumer applications along with the electrical and electronics industry. 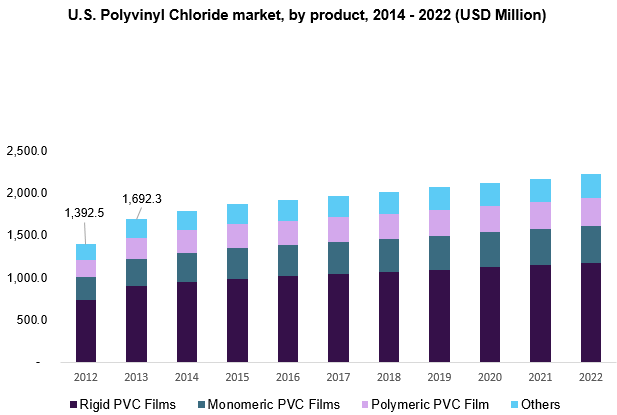 North America accounted for 13.1% of the total market share in terms of revenue in 2016. The economic recession in the U.S. has slowed the growth of the construction and automotive industries, which has led to decline in demand for PVC over the past few years. However, recovery of these industries is expected to drive the market at a significant growth rate. The construction segment accounted for 15% of the PVC market in North America in 2016. The recent economic slowdown has affected automotive and construction markets in the U.S. & Canada negatively which is expected to hinder the market growth. However, increasing application of PVC in consumer and electrical & electronic industries is expected to complement the market growth.

Market growth in Europe is mainly triggered by increasing penetration of PVC in application markets such as construction, electrical & electronics, and consumer products. The market growth in the region can be attributed to increasing demand for PVC in Russia and Turkey. The demand is primarily driven by increasing construction activities in these countries. Prevalent use of PVC in electrical & electronics is further expected to fuel the market growth over the forecast period. Growing demand for consumer products in the region is also a factor contributing to the polyvinyl chloride market growth.

The construction is the largest application segment for polyvinyl chloride. Construction activities are likely to grow mainly in emerging countries of Asia Pacific, Latin America, and Middle East on account of increasing demand for better infrastructure facilities due to rising GDP, increasing urbanization, and rapid industrialization. The construction demand has reached a saturation point in North America and Europe; thus, the growth rate is expected to be negligible.

The demand for polyvinyl chloride in electrical & electronics is high and steady primarily in North America and Europe. Moreover, growing electrical and electronics industry in Asia Pacific, mostly in China, Taiwan, India, Indonesia, Philippines, and South Korea are projected to boost demand over the forecast period. 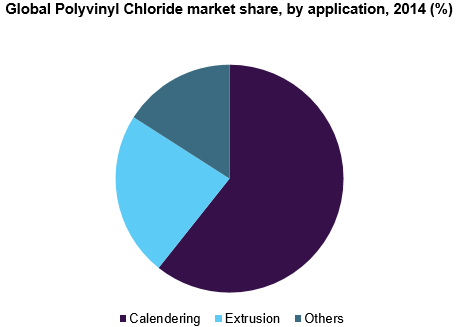 PVC is used for packaging purposes such as medical devices & apparatus packaging, bottle sleeving, and packaging of electronic & other consumer products. Growing packaging industry, mainly the plastic packaging sector is anticipated to exhibit a positive outlook. China and India are major packaging producers globally; paving the way for greater penetration in region.

India is one of the major suppliers of packaging products to Middle East region. Also, emerging economies such as Brazil and South Africa are likely to become a packaging hub which creates an ample opportunity for manufacturers in the region. Rising sales of convenience foods have led to increasing demand for packaging which will drive polyvinyl chloride demand. Also, non-food packaging applications such as packaging of electronic products are likely to contribute to growth.

PVC is used in wires & cables for insulation purposes due to its flexibility and heat resistance properties. Growing construction industry in emerging countries across the globe consequently increases demand for wires and cables for electrification purposes.

Acoustic and thermal insulation properties along with its durability and workability make the polymer among most preferred plastics in automotive applications. Car manufacturers use the material for producing car interiors and for providing vinyl flooring. Moreover, there is increasing use of plastics in aircraft components as an alternative to aluminum and other metal alloys.

It is also used in aircraft components such as instrument panels, air ducts, seat parts, window shades & reveals, light housings, and personal service units. Ethylene and chlorine are primary raw materials required for the production of vinyl chloride monomer (VCM). Therefore, VCM prices are affected by a shift in ethylene prices, which is derived from crude oil. The crude oil prices witnessed a slump in prices in 2014 when it is dropped to a record low of USD 40 per barrel.

Asia Pacific emerged as the leading region and accounted for 58.1% of the overall volume in 2013. It is generating the highest growth in Southeast Asian countries due to growing trade activities, a weak currency, and high investment in the manufacturing industry. Countries such as Indonesia and Vietnam have become a food production hub of Southeast Asia that requires establishment of manufacturing facilities. The facilities will consume a significant amount of PVC products and hence creates an opportunity for resin manufacturers in the region.

Middle East & Africa is expected to be one of the fastest-growing region owing to increasing demand in construction activities in countries such as Qatar, UAE, and Saudi Arabia. Economic growth in Africa has resulted in the growth of the consumer industry, which in turn is expected to fuel market growth.

Rising disposable incomes in countries such as Brazil and Mexico are expected to drive the growth of consumer and electrical & electronics industries, which in turn is expected to fuel industry growth over the forecast period.

The global polyvinyl chloride industry is highly competitive and fairly concentrated, with top companies accounting for maximum share. Key market participants include OxyChem, Ineos Group Ltd. and Formosa Plastic Group have integrated along the value chain to produce PVC products through the in-house output of ethylene

Some companies such as Shin-Etsu primarily supply vinyl chloride monomers and polymers to other firms for formulation. Companies such as Solvay S.A. along with Formosa Plastic Group, Ineos Group Ltd. among others are involved in the production of compounds such as rigid, flexible, plasticized, and unplasticized PVC.

Planned and unplanned outages of PVC due to COVID-19 outbreak across the globe have reduced export allocations and, in turn, negatively affecting the demand for PVC. For instance, Formosa Plastics has put its 850 Kilotons per annum plant in Texas in a planned turnaround, and Shintech has also reduced its exports to build inventory ahead of planned maintenance at its Texas complex in April. Further, demand in India remains unstable due to the increasing impact of COVID-19 across the country. The updated report will account for COVID-19 as a key market contributor.