The global chlorine trifluoride market size was valued at USD 45.48 million in 2020 and is expected to grow at a compound annual growth rate (CAGR) of 4.2% from 2021 to 2028. It is an inter-halogen compound in the gaseous form that is colorless, extremely reactive, and corrosive. The versatile application of chlorine trifluoride (CIF3) in the semiconductor industry for cleaning purposes is anticipated to drive market growth. The introduction of the 5G has increased the popularity of semiconductors in the field of computing and communication industries. High disposable income coupled with increased expenditure on consumer electronic products is likely to enhance the demand for semiconductor manufacturing, which is expected to influence the ClF3 industry growth positively. 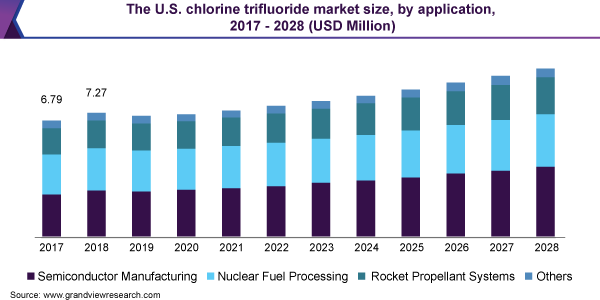 Increasing demand for clean power coupled with decreasing fossil fuel reserves is projected to raise concerns related to the availability of energy sources in the future. Such concerns are encouraging government authorities and energy companies to invest in the nuclear energy market, increasing the production of uranium, which is expected to enhance the demand for Uranium Hexafluoride (UF6) in nuclear power generation, thereby boosting the growth of the ClF3 gas market.

The high growth of semiconductors was initially observed between 1997 and 2007 with high demand for personal computers for public and private utility, which later on shifted to rapid demand generation of semiconductors from smartphones since the introduction of the iPhone. However, in the coming years, the market is likely to be driven by the adoption of Artificial Intelligence (AI) with applications in automobiles, smartphones, laptops, television, and more and is projected to record sales of USD 30 billion by the end of 2022. These factors are anticipated to fuel the product demand in the semiconductor cleaning industry over the coming years.

Chlorine trifluoride has a robust range of applications across an array of industries, the substance is categorized as extremely toxic, which limits its utility in multiple geographies. Consistent contact with the substance can cause eye damage, lung irritation, corneal ulceration, severe skin irritation, and more. According to the New Jersey Department of Health and Senior Services under the U.S. Department of Health, CIF3 is considered a highly reactive chemical capable of causing dangerous explosion hazards.

The semiconductor manufacturing segment led the global chlorine trifluoride market in 2020 and accounted for a revenue share of over 39%. The segment is estimated to register the fastest CAGR from 2021 to 2028 due to high product demand in this application as it helps in eliminating solid deposits from the chamber wall without disassembling the chambers. The CIF3 is also used as a component in nuclear fuel processing, in etching cleaning operations in the semiconductor industry, in rocket fuels, and many other industrial-based applications.

Its key application is to manufacture uranium hexafluoride used in a nuclear reactor and reuse it by the fluorination of uranium metal. The primary growth driver of the ClF3 market is the rising demand for consumer electronics goods across the globe. Consumer electronics utilize semiconductor devices for communication, transportation, computing, defense, healthcare, clean energy, and emerging technologies, such as flat panel displays, leading to an increase in product demand across various market segments.

Continuous innovations and technological advancement in the aerospace sector are projected to facilitate the development of rocket propellant fuel applications across various regions, which, in turn, is likely to boost the product demand. Major market participants are being supported by governing bodies, which are financing the R&D activities for the development of rocket propellant systems. The product is used as a pyrolysis inhibitor during the production of fluorocarbon and fluoropolymer.

Asia Pacific led the global market with a revenue share of more than 51% in 2020. The regional market is estimated to grow at the fastest CAGR from 2021 to 2025 on account of the rising product demand for nuclear fuel processing as a result of high consumption of UF6 for nuclear power generation in countries, such as China and India. The product demand is also anticipated to increase in the region’s electronics industry due to macroeconomic factors, such as rapid urbanization, increasing disposable income, and changing demographics. 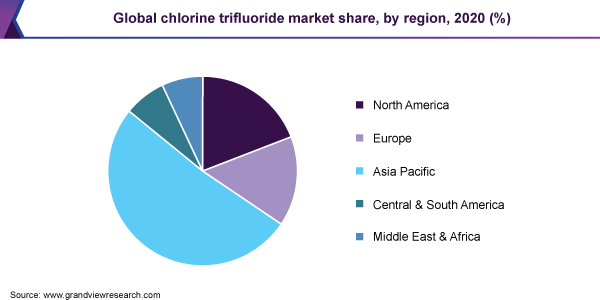 The market in Europe is anticipated to show moderate growth during the forecast years on the account of factors, such as growing environmental concerns and development in the semiconductor & aerospace industries. Germany is the fastest-growing country in the regional market owing to the presence of several semiconductor manufacturers in the country. It is one of the largest producers of electronics products globally and has the largest export market of semiconductor equipment. France is also contributing significantly to the growth of the Europe market due to rising product demand.

Partnerships and collaborations between existing industry participants are expected to have a significant impact on the future competitive scenario. For instance, in October 2020, Air Products formed a joint venture with ACWA Power to expand its production capacities by acquiring ACWA Power’s gasification, power, and industrial gas assets.

The market is highly concentrated in the Asia Pacific and Europe owing to the presence of numerous manufacturers in these regions. For instance, in July 2021, Linde started up an air separation unit and a new nitrogen generator in Taiwan to cater to the rising demand from its end users in the electronics sector. Some of the prominent players in the global chlorine trifluoride market include:

This report forecasts revenue growth at global, regional, and country levels and provides an analysis of the latest industry trends in each of the sub-segments from 2017 to 2028. For the purpose of this study, Grand View Research has segmented the global chlorine trifluoride market report on the basis of application and region:

How big is the chlorine trifluoride market?

What is the chlorine trifluoride market growth?

Which segment accounted for the largest chlorine trifluoride market share?

b. Asia Pacific region dominated the global ClF3 market with a market share of 51.9% in 2020. The rise in consumption of Uranium hexafluoride (UF6) used for nuclear power generation in countries such as China and India is expected to drive the ClF3 market demand for nuclear fuel processing.

Who are the key players in the chlorine trifluoride market?

b. The key players dominating the global ClF3 market include Enerize Corporation, Air Products and Chemicals, Inc., and Versum Materials.

What are the factors driving the chlorine trifluoride market?

b. High disposable income coupled with increased expenditure on consumer electronic products is likely to enhance the demand for semiconductor manufacturing, which is expected to influence the ClF3 industry growth positively. Increasing clean power demand coupled with decreasing fossil fuel reserves is projected to raise concerns related to the availability of energy sources in the future.