The global cinnamon market size was valued at USD 760.2 million in 2018. Cinnamon has been known to possess several beneficial properties that aid in the prevention and treatment of a number of medical conditions. As a result, it finds application in a host of industries, including food and beverages, pharmaceuticals, and cosmetics. Growing consumer awareness regarding healthy foods and ingredients is a key factor driving the market.

Cinnamon is a spice that is obtained from the branches of the Cinnamomum tree family, which is native to South America, the Caribbean, and Southeast Asia. It is the second most popular spice in Europe and the U.S., the first being black pepper. Traditionally used to treat cough, arthritis, and sore throat, the application scope of the spice has expanded significantly, thanks to in-depth research in the field. 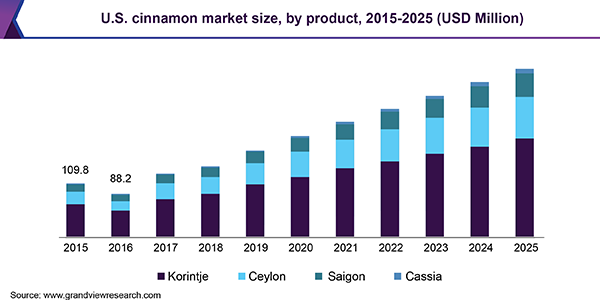 Cinnamon is a rich source of various minerals and nutrients, is rich in antioxidants, acts as an anti-inflammatory, and has been known to have beneficial effects against diseases like diabetes, Alzheimer’s, and HIV-1. These benefits are likely to spur product demand over the coming years. The Cassia variant is used to alleviate stomach and muscle spasms, treat infections and the common cold, prevent nausea and vomiting, and control gas and diarrhea.

Cinnamon is used as a flavoring additive and aromatic condiment in the food and beverage industry. In the U.S., the condiment is used to flavor various bread and bread-based dishes, cereals, and fruits. Eggnog, a common and popular Christmas drink in North America, is flavored with cinnamon powder. The spice is also widely used in Turkish cuisine, for savory as well as sweet preparations. It is also used as a flavoring in certain alcoholic beverages, such as cinnamon brandy which is popular in some parts of Greece, and cinnamon-flavored whiskey in the U.S.

Ceylon cinnamon held the dominant share of more than 35.0% in the global market in 2018 and will continue its lead through 2025. Native to Sri Lanka, where a majority of the spice is produced, this variant is also cultivated for commercial use in Seychelles and Madagascar. Considering that this spice is used in numerous Mexican dishes, Mexico has emerged as one of the leading consumers of Ceylon cinnamon in the world. It is preferred among consumers over other forms owing to its ultra-low Coumarin content. Demand for the same has also been noted in Europe, where consumers in countries like Belgium, the U.K., and Italy have been demanding it due to its unique flavor and beneficial health properties.

The Cassia segment is slated to exhibit the fastest growth over the forecast period. This variant originates from southern China, but a number of its subspecies are cultivated across southern and eastern Asia. The product form is considered to be of lower quality and is much cheaper than Ceylon cinnamon. As a result, it is most widely consumed around the world. Cassia has found application in the food industry as well as in traditional Chinese medicine for its strong flavor and numerous beneficial properties. Today, this spice variant is globally used to alleviate stomach and muscle spasms, treat infections and the common cold, prevent nausea and vomiting, and control gas and diarrhea.

By way of application, the residential segment held the largest share of over 50.0% in the global cinnamon market in 2018. There has been a rise in the use of this spice in numerous dishes due to its sweet and spicy taste and this is a key factor boosting product demand in this segment. Growing awareness regarding the many benefits of cinnamon among consumers has resulted in heightened demand in countries such as the U.K., U.S., Belgium, Italy, and India. Cinnamon is one of the basic ingredients in several Mexican dishes and with the increasing popularity of Mexican cuisine around the world, demand for this condiment is expected to rise over the forecast period. 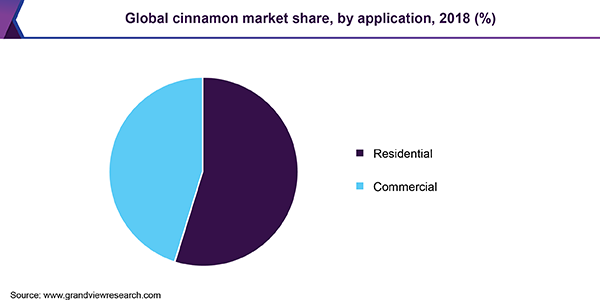 Cinnamon is expected to foresee significant demand from various commercial industries such as pharmaceutical, cosmetics, and food and beverages. This segment is expected to exhibit the highest CAGR of 14.2% from 2019 to 2025. Owing to its medicinal properties, including its benefits as an antioxidant, anti-inflammatory, and anti-microbial, this spice is used in the production of various medicines and medical supplements.

In the cosmetics industry, the cinnamon extract is used as an essential oil, which can be used as an ingredient in various personal care products. Cinnamon-based essential oil is one of the best natural remedies for various medical conditions, such as cough and cold as well as constipation. The oil also helps in stimulating blood circulation, relieves pain, reduces stress, fights off infections, improves digestion, and acts as an insect repellent. Such factors are expected to expand the scope of cinnamon as a functional ingredient in the formulation of various nutraceutical products.

North America dominated the global market, accounting for 35.5% of the overall revenue in 2018. Shifting consumer preference for herbal and healthy products is the main factor driving the market. Cinnamon is a key source of a number of nutrients and minerals, is an anti-inflammatory, is rich in antioxidants, and is known to aid in weight loss. The spice has also shown beneficial effects against diseases such as Alzheimer’s, diabetes, and HIV-1. The high prevalence of such health conditions in the region is likely to spur product demand.

Ceylon cinnamon is particularly in demand in the U.S. owing to its ultra-low levels of Coumarin, a substance known to cause liver damage. According to a study published in the Gastroenterology journal in 2009, liver diseases are the second leading cause of death among all digestive diseases in the U.S. Moreover, the American Liver Foundation states that liver cancer claims 65 American lives each day and by 2035, the number of diagnosed liver cancer cases in the country will reach an annual figure of nearly 40,000. These alarming statistics have compelled consumers to be more conscious about the intake of Coumarin, thereby resulting in greater demand for Ceylon cinnamon.

The market is highly competitive in nature. Top players operating in the market include Pure Ceylon Cinnamon, Biofoods Pvt Ltd., and Ceylon Spice Company. Some of the other prominent players are HDDES Group; C.F. Sauer Company; First Spice Mixing Company; Elite Spice; EHL Ingredients; McCormick & Company, Inc.; and SDS SPICES (PVT) LTD. Companies have been leaning on mergers and acquisitions to strengthen their foothold in the market as well as to increase product offerings. They are also focusing on expanding their production capacity and are adopting innovative technologies to meet consumer demand for ground and powdered cinnamon.

This report forecasts revenue growth at global, regional, and country levels and provides an analysis of the latest industry trends in each of the sub-segments from 2015 to 2025. For the purpose of this study, Grand View Research has segmented the global cinnamon market report on the basis of product, application, and region: