The global cleanroom technology market size was estimated at USD 3.7 billion in 2019 and is expected to grow at a compound annual growth rate (CAGR) of3.8% from 2020 to 2027. Technological advancement, stringent regulatory standard, and increased demand in pharma and biopharmaceutical companies to develop quality products are some of the major factors fueling the market for cleanroom technology. 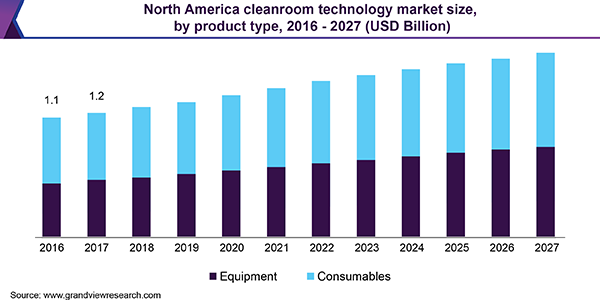 Cleanrooms are classified on the basis of number and size of particulate matter permitted per volume of air in the manufacturing unit. British Standard 5295, Federal Standard 209, ISO Standard, and Pharmaceutical Cleanroom Classifications are the regulatory standards used for classifying cleanrooms. Based on European standards, cleanrooms are categorized into four grades: A, B, C, and D for manufacturing of sterile medicinal products. As a result, demand for equipment and consumables employed in cleanrooms is rising globally.

Increased demand for cleanroom technology in manufacturing units across diverse industries is one of the crucial factors anticipated to boost market growth over the forecast period. Various sources such as raw materials, product flow, and machinery are likely to contaminate the product being manufactured. Growing adoption of cleanroom technology will ensure the sterility of final product and the overall manufacturing processes. It is an integral part of healthcare industry, serving the purpose of developing standardized products as per regulatory norms.

There are several technical and economic advantages of using cleanroom technology in manufacturing sectors, which include gaining a superior ranking in the market, a more organized manufacturing process with optimum time and cost-efficiency, and improved product flow. These solutions are usually customized according to the needs of various industries such as biotechnology, healthcare, and food processing. These customizations are expected to provide the right environment that complies with the regulatory standards, thus propelling the growth.

Technological advancements pertaining to cleanrooms are expected to drive the market for cleanroom technology over the forecast period. Cleanroom technologies have transitioned from being conventional constructive to modular flexible cleanrooms. Benefits such as reconfiguration as per requirement, quick installation, and cost-effectiveness are some of the key factors that boost demand for modular cleanrooms in various industries. In September 2017, Telstar developed a standardized version of biological safety cabinet-BioVanguard-which belongs to class 2 that have low power consumption, maintenance cost, and noise levels. In May 2018, Kimberly-Clark Corporation invested around USD 30 Million to expand its manufacturing facility in North Carolina.

Consumables held the largest revenue share in the cleanroom technology market as of 2019. Cleanroom consumables consist of disposable and reusable materials, such as face masks, beard covers, gloves, wipers, swabs, sticky mats, and adhesive tapes. These consumables play a critical role in maintaining cleanliness standards. Use of consumables ensure prevention of contamination from hands, shoes, beard, and hair of personnel.

Gloves accounted for the highest revenue share in the market for cleanroom technology in 2019. The primary purpose of wearing gloves is to reduce contamination. Demand for gloves is expected to surge due to their increased use in diverse industries, such as pharmaceutical, medical device, biotechnology industries, and diagnostic centers. Thus, increase in operations in these sectors, growing concerns about safety of manufacturing products, and regulations imposed by various regulatory bodies for cleanliness are some of the key reasons that can be attributed to its largest revenue share.

Equipment segment is expected to show lucrative growth in the market for cleanroom technology over the forecast period. Equipment are designed to limit air contamination, and thus, help maintain cleanliness levels that comply with regulatory standards. In addition, cleanroom equipment minimizes ingress of particulate contaminants. The appropriate design of airflow regulated by such devices prevents surface accumulation of particulate matter, thus maintaining cleanliness. Installation of these equipment is expected to increase over the forecast period due to emergence of stringent regulations in the healthcare sector.

In 2019, pharmaceutical industries dominated the end-use segment. Advancements in pharmaceutical cleanroom technology, both in terms of technicality and regulations, is one of the key factors that can be attributed to the revenue share held by pharmaceutical industry. Increase in demand for substitution of conventional cleanroom technology by restricted access barrier systems (RABS) and isolators is also among few determinants that indicate current penetration of this technology in pharmaceutical industries. In addition, stringent regulations, especially in U.S., regarding drug approvals when they are imported from emerging economies, such as India, China, and Brazil, are also encouraging the pharma companies to ensure controlled environment and presence of lower levels of pollutants. 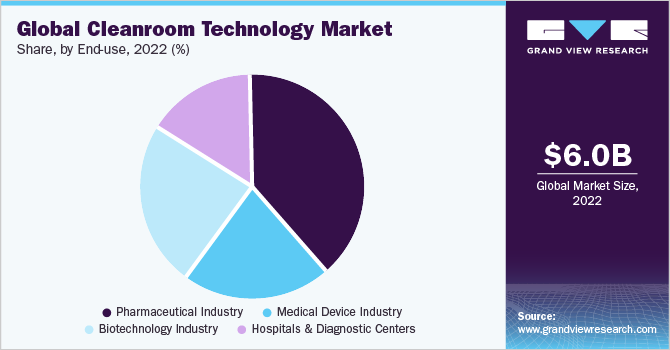 In 2019, North America dominated the revenue, accounting for the largest share of the market for cleanroom technology. The growth is attributed to factors such as presence of key pharmaceutical companies, increase in healthcare expenditure, rise in geriatric population, and high disease burden. The healthcare industry has created several opportunities for the market for cleanroom technology in this region. Market expansion of several pharmaceutical, medical devices, biotechnology, and research organizations is driving the growth.

However, Asia Pacific is expected to emerge as the fastest growing segment in the market for cleanroom technology with a growth rate of approximately 6.5%. The pharmaceutical industry in Asia Pacific is considered as the third largest after North America and Europe. Thus, investment for developments in healthcare industry is also rising in this region. The major drivers for the growth of pharmaceutical industry in Asia Pacific are increase in production of generic drugs due to patent expirations of blockbusters, growth in geriatric population, and rise in burden of non-communicable diseases such as cardiovascular diseases, cancers, and diabetes. These aforementioned factors can be attributed to the growth of the market for cleanroom technology.

The market for cleanroom technology is highly fragmented in nature. Manufacturers are striving to increase their market share through strategies such as development of new products, regional expansion, merger and acquisitions and advancements of the existing products. For instance, in July 2019 Azbil Corporation launched BiOptima,biological safety cabinets in order to improve its product portfolio. In June 2019, Exyte Group opened its new manufacturing plant in Germany to increase its regional penetration. Some of the prominent players in the cleanroom technology marketinclude:

This report forecasts revenue growth at global, regional, and country levels and provides an analysis of the latest industry trends in each of the sub-segments from 2016 to 2027. For the purpose of this study, Grand View Research has segmented the global cleanroom technology market report on the basis of product type, end use, and region: