The global cloud gaming market size accounted for USD 691.6 million in 2021 and is anticipated to expand at a compound annual growth rate (CAGR) of 45.8% from 2022 to 2030. Cloud gaming is a type of game that utilizes cloud-based technologies. It is built so that users can control and engage in a range of games on web servers, which then broadcast the entire game to the device whereby the cloud is attached. Unlike traditional gaming processes, which run on the gaming device's local disc space, cloud gaming technology works as incorporation into the cloud technology, requiring less storage on the user's device. Cloud gaming also is known as gaming-as-a-service. 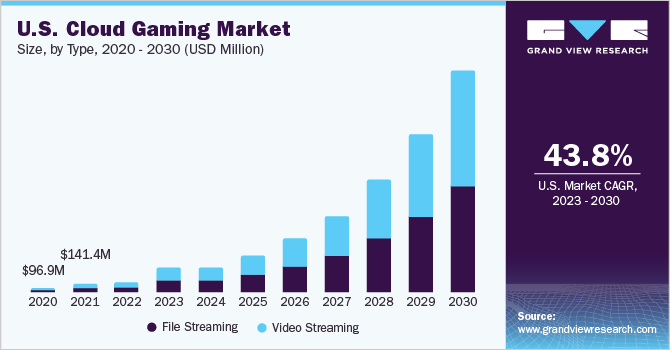 The rise in cloud computing, data centers, and cloud games are linked to one another. A cloud game resides entirely in data centers and delivery networks with cloud gaming, removing the need for downloads and changing a user's device into a linked high-resolution terminal, with substantial benefits for both provider and player. Cloud gaming services combine global delivery networks, hyper-scale cloud capabilities, and streaming media services to construct the next era of immersive, interactive, and social entertainment platforms to support this transformation.

Due to the ease of operation and cost benefits, major market players of the video gaming industry have entered the market, while a few are researching and developing their services to enter the market. For instance, Electronic Arts, Inc. is soon to release its cloud game portfolio and has been testing the performance of its cloud gaming services.

The onset of COVID-19 has accelerated the market growth as new gamers subscribed to cloud gaming services due to limited outdoor activities and social interactions. Major companies took advantage of the increasing interest in video games and launched cloud gaming services to provide an affordable solution and expand the overall gaming market. For instance, Intel acquired RemoteMyApp, a cloud gaming service, to enter the market in November 2021. The acquisition gave Intel access to the RemoteMyApp team of skilled cloud service designers.

The file streaming market is expected to witness the quickest CAGR of over 46% from 2022 to 2030 as it is a more economical option for game developers. File streaming can reduce costs related to media production and patches sent to players. Many gaming brands are now embracing cloud streaming which is likely to continue in the coming years. Some businesses choose private clouds to host their games, benefiting from the exclusivity and enhanced protection for users.

In 2021, the gaming console sub-segment of the device segment had the most significant revenue share, accounting for approximately 50.0% of the total market. The popularity of consoles is because only a few percent of people can afford or participate in computer gaming and the convenience of controllers over the time and effort required to build or purchase a computer.

The smartphones segment accounts for more than 10.0% of the market revenue and is anticipated to grow at the second-highest CAGR over the next few years. Smartphones are prevalent and in possession of most individuals; intelligent devices are affordable, and several consumers also own more than one device. This factor is expected to contribute to the segment's growth in the coming years.

Casual gamers account for more than half the market share as of 2021 and are expected to grow the segment with a CAGR of over 40.0%. One of the most popular gaming genres currently is hyper-casual, and they have the most extensive viewership and may be monetized to generate revenue. For instance, Voodoo's hyper-casual games have received over 2 billion downloads. 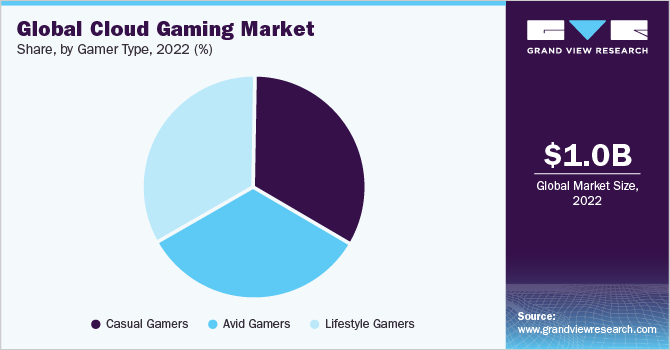 The avid gamers segment accounts for the second largest market share, followed by the lifestyle gamers segment. Avid gamers are gamer influencers who encourage their friends to discover games they like. A lifestyle gamer is passionate about video gaming and indulges in gaining skills and mastering the games. These characteristics are becoming increasingly popular, and both segments are forecasted to show a uniform growth rate between 2022 and 2030.

The Asia Pacific had the highest revenue share of almost 45.0% in 2021 and is predicted to expand steadily during the forecast period. The main factors attributing to the market growth are the demographics and the large gamer population in the region combined. China and India are the highest populated countries in the world. Japan, too, has seen an increase in cloud gaming services.

The region of Latin America is expected to overgrow, registering a CAGR of nearly 40% over the forecast period. Companies such as Xbox and NVIDIA Corporation’s GeForce Now have entered the Brazilian market. While the market is newly established, factors such as population strength and youth account for almost 15.0% are likely to aid the market's growth.

The market players are focused on advancements, innovation, and acquiring new components to gain a competitive edge. In December 2019, Typhoon Studio, a triple-A game development studio based in Montreal, was acquired by Google's Stadia cloud gaming business. Stadia's strategy was to rely on domestically created talent to develop unique material for the Stadia platform, released for early adopters in November.

Companies invest significant time and money researching and creating new features and functionalities. In October 2021, NVIDIA introduced its next-generation cloud gaming platform, GeForce NOW, which will enable GeForce RTXTM 3080-class gaming exclusively in a new, high-performance subscription tier. The system is expected to give the highest resolutions and frame rates in cloud gaming and the lowest latency. Some of the eminent players operating in the global cloud gaming market include:

This report forecasts revenue growth at regional and country levels and analyzes the industry trends in each sub-segment from 2018 to 2030. For this study, Grand View Research has segmented the global cloud gaming market based on type, device, gamer type, and region.

How big is the cloud gaming market?

What is the cloud gaming market growth?

Which segment accounted for the largest cloud gaming market share?

b. Asia Pacific dominated the cloud gaming market with a share of 44.7% in 2021. This is attributable to the cost-effective nature of the cloud gaming platforms is promoting its usage across various new customer classes that vary in investing in gaming systems due to its cost.

Who are the key players in the cloud gaming market?

What are the factors driving the cloud gaming market?

b. Key factors driving the cloud gaming market growth include growing penetration of high-speed internet, rising adoption of smart devices, increasing utilization of gaming as a service, and digital transformation in the media & entertainment industry.