The global coal bed methane market size was valued at  USD 16.0 Billion in 2019 and is expected to grow at a compound annual growth rate (CAGR) of 5.9% from 2020 to 2027. The increasing consumer demand for power across numerous sectors such as residential, industrial, and commercial and also changing preferences to use coal bed methane as power generating source to meet the increasing demand for electricity across the regions are keys factors that are projected to drive the overall coal bed methane market over the estimated period. Coal bed methane (CBM) is an unconventional form of Natural Gas (NG) obtained from coal seams and deposits. This is formed during the coalification process and is generally extracted from the underground after the coal mining process. 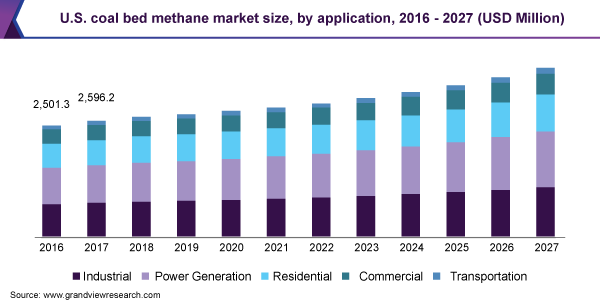 Also, increasing investment activities by major players working in the target market for producing CBM, coupled with policies introduced by numerous government agencies of emerging nations such as India and China for the development of upstream business are some factors that will further fuel the market growth over the estimated period.

Growing government initiatives for the usage of methane gas (CH4) coupled with a rising preference to use eco-friendly energy increased the number of exploration activities in various areas in the North American region. This is the main factor that is expected to drive the market. In the U.S., coal bed methane development is projected to be more evident during the estimated period owed to substantial tax incentives. The purified form of methane attains the maximum percentage of the CBM in the coalfields of the United States. After the production, the produced product is being transported, marketed, and pricing is allotted is the same as the pricing of natural gas.

Besides, it is projected that recoverable unconventional source reserves such as coal bed methane are much larger than conventional resources, with a large block that is yet to be explored. Growth in exploration and production on a global scale is likely to drive coal-bed methane production over the coming years. Incurred drilling cost accounts for the maximum share in the CBM mining process. Drilling cost is estimated to account for over 73% of the total cost for the production of 1 m3 of coal bed methane.

However, fluctuation in gas pricing coupled with the rapid increase in industrialization across emerged and emerging countries across the world are few other factors that are likely to propel the market growth. Also, high capital investment in activities such as exploration and drilling are key factors that may restrain the market growth over the projected period. 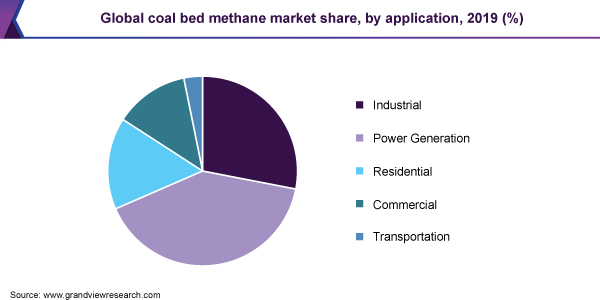 Commercial accounted for 12.71% of the total market in 2019. Commercial applications are supposed to experience a CAGR of 5.0% from 2020 to 2027. CBM has several other applications such as manufacturing LPG, gas engine systems, propelling gas turbines along with providing the basis of pharmaceutical and plastics sectors. In India, Petroleum and Explosives Safety Organization of India (PESO) issued seven licenses to allot coal bed methane as a fuel used by automotive vehicles across the country.

Asia Pacific dominated the global coal bed methane market size of USD 7.22 billion in 2019 and is expected to witness a CAGR of 7.4% from 2020 to 2027. Significant numbers of unexplored reserves will accelerate the CBM market enhancing the business growth resulting in an increased production of CBM. Also, commercial coal bed methane is being produced in countries such as Australia, China, and Canada.

In the Asia Pacific region, growing GDP is leading to rising demand for energy. The growth of Asia Pacific energy demand is primarily determined by China, Indonesia, and India. Unexplored reserves for CBM in countries such as China, India, and Indonesia is the reason for new competitors are keen to participate in this region. For resources such as unconventional gas, the region is a huge demand center, and due to the growing interest of various companies, it is also likely to appear as a supply center.

For instance, Russia is expected to hold over 83 trillion cubic meters of total resources; however, political uncertainty and market forces have controlled the production of CBM. Also, promising geological features and presence of coal bed methane in Russia created reasonable prerequisites for launching, mainly in Kuzbass, and afterward in other coal basins, and production of methane on a larger scale as a dispersed natural resource. Simultaneously, assessed resources in the Alaskan region holds a potential of more than 30 trillion cubic meters but still single area unexplored.

This report forecasts revenue growth at global, regional, and country levels and provides an analysis on the latest industry trends in each of the sub-segments from 2020 to 2027. For the purpose of this study, Grand View Research has segmented the global coal bed methane market report on the basis of application and region:

How big is the coal bed methane market?

What is the coal bed methane market growth?

b. Power generation accounted for a revenue share of 40.6% in the global market in 2019. Power generation from coal bed methane is less expensive and hence largely preferred by developed as well as emerging countries.

Who are the key players in coal bed methane market?

What are the factors driving the coal bed methane market?