The global cochlear implant market size was valued at USD 1.5 billion in 2018 and is estimated to grow at a CAGR of around 10.5% over the forecast period. This high growth can be attributed to the advancements in cochlear implants, growing penetration of implants due to expanded geographical reach of market players, and government support.

Technological advancements, strategic initiatives by the industry players, and favorable reimbursements for cochlear implantation surgery are the other key drivers of the market. For instance, in November 2015, Advanced Bionics launched a new sound processor Naída CI Q90, which delivers advanced technology in automation, noise reduction, and waterproof protection. 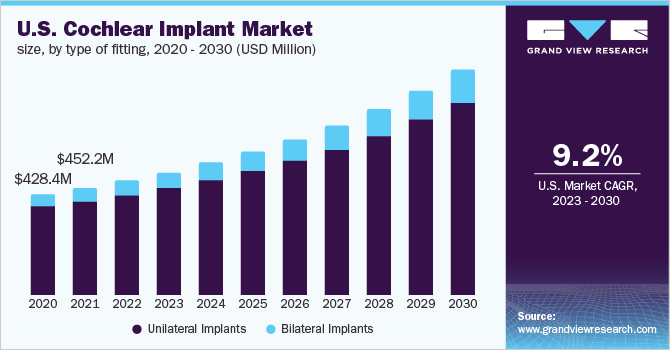 In May 2016, MED-EL launched a new rechargeable battery for their SONNET Audio Processor. This battery can charge quickly and provides about ten hours life. Hence, development of such devices and growing awareness amongst the patients and physicians are likely to boost the cochlear devices industry during the forecast period.

Bilateral implantation is expected to witness the fastest growth during the forecast period. This is attributed to its cost-effectiveness when implanted in children, ability to recognize the speech in noise, and increasing meningitis cases. Furthermore, several countries offer reimbursement only after bilateral implantation. Hence, all these factors may help to enhance the demand of devices and thereby boost the growth of the industry.

In December 2017, Cochlear and Sensorion announced collaboration to study combination therapies for patients with cochlear implant. The companies will evaluate SENS-401 in combination with cochlear’s implant. As part of this collaboration, Cochlear invested about USD 1.8 million (€1.6 million) in shares of Sensorion. In exchange, Cochlear will receive a right of first negotiation for a global license of SENS-401 in patients along with certain cochlear devices.

Cochlear implants for adults segment dominated the overall market in 2018. This can be majorly attributed to the presence of a large patient base and lesser complications involved as compared to children. For instance, according to the U.S. FDA, in 2012, out of 96,000 implanted devices about 58,000 were anticipated to be implanted in adults. 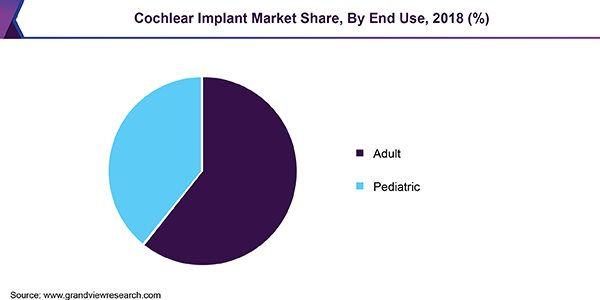 Pediatrics segment is expected to witness the fastest growth during the forecast period. Growing adoption due to increasing awareness, availability of reimbursement, and lesser wait time as compared to adults are the factors that drive the market during the forecast period. Furthermore, after 2000, FDA approved the use of cochlear implant for use in children starting at 12 months of age. Thus, implantation of cochlear implant at an early age further increases the benefits of the device.

Europe accounted for the largest share of all the regions in 2018. This can be credited to high penetration of implants, conducive health infrastructure of the European Union, and presence of a large patient base in the region. North America was the second largest market in 2018 and is expected to observe a significant growth in coming years.

Increasing awareness about diagnosis of hearing defects, rising disposable income, and growing medical tourism due to affordable treatment in India and other developing nations are expected to propel the market growth in the coming years. For instance, in June 2017, Karnataka, India launched “Deafness Free Karnataka” project to provide cochlear implant to about 2,000 children (below 6 years). In December 2018, Fortis Hospital, Mohali launched Cochlear Implant Clinic. This initiative is expected to provide high quality treatment at an affordable price in the region.

Although several players are operating in the industry, dominant share is held by the top two to three companies. Cochlear Ltd. is one of the major companies operating in the cochlear implants market due to wide range of product portfolio, continuous up-gradation & advancements in the product, and a global presence. Some of the key players are Cochlear Ltd., MED-EL, Sonova, Gaes Group, William Demant Holding A/S, and Nurotron Biotechnology Company Ltd.

Geographical expansion and advanced technological developments in cochlear implants to make them efficient & user friendly are the key strategic initiatives taken by major industry players. Furthermore, increasing awareness about the company’s products amongst patients and physicians would help to increase the share of the company. For instance, in August 2014, Advanced Bionics launched two educational apps, which were launched to educate children about hearing loss and to raise awareness about their rehAB range of rehabilitative.

In April 2019, Advanced Bionics received an approval from the Health Canada for its HiRes Ultra 3D Cochlear Implant. The implant is pain free and hassle free choice for patients undergoing MRI examinations. Development of such technological advanced implants is expected to boost the market during the forecasts period.

This report forecasts revenue growth and provides an analysis on the industry trends in each of the sub-segments from 2015 to 2026. For the purpose of this study, Grand View Research has segmented the cochlear implant market based on type of fitting, end use, and region: