The global coiled tubing market size was valued at USD 1.78 billion in 2021 and is estimated to expand at a compound annual growth rate (CAGR) of 3.4% in terms of revenue from 2022 to 2030. The ability of the product to reduce overall costs in oil & gas exploration is expected to drive the market growth during the forecast period. The advantages of coiled tubing over conventional operations include rapid mobilization, reduction in time associated with pipeline handling while running in and out of the hole, higher work performance, balanced well control, and greater safety. These advantages are anticipated to propel the market growth during the forecast period. 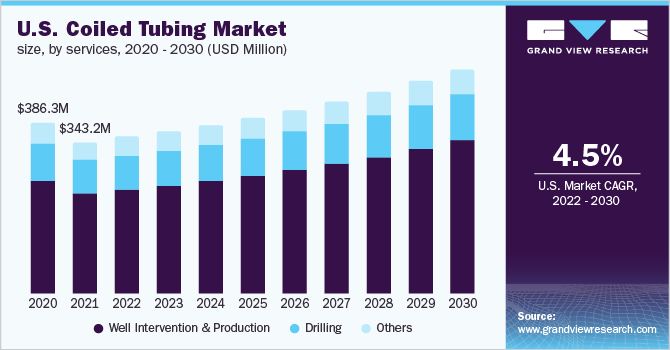 The U.S. holds the largest share of the North American coiled tubing market. Due to Ukraine- Russian conflict, the country is planning to ramp up its oil & gas production. The production is expected to increase by 1 million barrels per day in 2022. Further, it is anticipated that the U.S. can expand its production by 700,000 barrels per day in 2023, which is going to positively impact the coiled tubing market during the forecast period.

As of 2021, the U.S. has 12 million acres of non-producing oil & gas federal land and 9,000 unused but approved permits for production. Owing to this, the government is planning to make companies pay fees on wells that they haven’t used for production. This plan is expected to force companies to start production of oil & gas. This decision is projected to augment the demand for coiled tubing during the forecast period.

The U.S. government is trying to bring down gas prices and hence it is planning new public land for drilling. In April 2022, the government announced that they are planning to auction off the lease to drill on 145,000 acres of public land across the country. This decision is expected to boost the oil & gas production in the country, which will further increase the usage of coiled tubing over the coming years.

In September 2021, the U.S. Senate passed a USD 550 billion clean energy investment bill, which is expected to reduce the dependence of the country on fossil fuels. This bill has forced major oil & gas companies to move away from fossil fuels and forced them to invest in renewable energy. This can slightly impact the demand for coiled tubing in the country over the coming years.

Well intervention & production accounted for a revenue share of over 65.0% in 2021 of the global market. Coiled tubing is preferred over conventional tubing in a well intervention because the latter needs to be screwed together. The former does not require a workover rig, as it can be inserted directly during ongoing production. Furthermore, it is also cost-effective and can be used on high-pressure wells.

The rising preference for coiled tubing in advanced operations for enhanced oil recovery and hydraulic & acid fracturing is encouraging key players in the oil & gas industry to integrate the product into their operations. For instance, in August 2021, Uzma Engineering secured a well reactivation contract from Petroliam Nasional Berhad. The company is expected to carry out well intervention services, which include coiled tubing, desander, pumping, and well testing.

Drilling is another key service segment. This product helps to speed up drilling, and owing to this, companies around the globe are investing in it. For instance, in January 2022, Schlumberger announced that they have received 5 years contract for a coiled tubing drilling service to be deployed in a major gas field in Saudi Arabia.

Based on operation, circulation is expected to register a CAGR of 4.2%, in terms of revenue, during the forecast period. This operation is used when a hydrostatic head prevents the flow of formulation fluids owing to its weight. The best solution is to inject nitrogen to circulate fluid out of the well.

Logging accounted for a revenue share of over 20% in 2021 of the global market. On account of its rigidity and ability to be pushed well from the surface, coiled tubing is widely used in logging operations. In well logging, new possibilities can be created by placing an electric wireline conductor cable inside coiled tubing.

Pumping is expected to register a CAGR of 3.6%, in terms of volume, during the forecast period. In this operation, the product is used for distributing fluids to a particular location in the well such as for performing chemical washes or cementing perforations. Moreover, the use of coiled tubing in deploying a complex pump can reduce the cost of deployment by eliminating several units on site.

The onshore segment accounted for a revenue share of over 65.0% of the global market in 2021. The segment is expected to continue its dominance across the forecast period because it is more cost-effective, and it is feasible to produce oil & gas from the onshore wells as compared to offshore. Moreover, the increase in usage of fracturing and shale is anticipated to further propel segment growth during the forecast period. 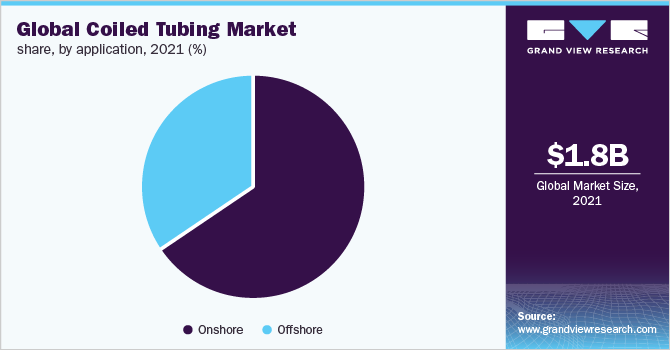 The offshore application segment is anticipated to register a growth of 4.1%, in terms of revenue, during the forecast period. Rapidly increasing demand for oil & gas has forced key players to invest in offshore drilling operations, which, in turn, is anticipated to propel the demand for coiled tubing over the coming years.

For instance, in April 2022, Exxon Mobile Corporation announced that they are going to invest USD 10 billion in offshore projects in Guyana. The project is expected to produce 1.2 million barrels of oil & gas per day by 2027. These kinds of projects are expected to propel market growth during the forecast period.

North America dominated the market in terms of volume and revenue and accounted for over 27.0% of the global revenue in 2021. The rising prominence of the shale gas industry has propelled the regional market growth. Technological advancements to increase the efficiency of wells are further propelling the usage of coiled tubing in the region.

Middle East & Africa is likely to remain a significant region of the market during the forecast period, as GCC countries are prominent oil producers. Moreover, new upcoming projects in Africa are expected to further drive the market growth over the forecast period. Around 428 oil & gas projects are expected to commence in Africa between 2021 and 2025.

Asia Pacific region is estimated to observe a CAGR of 3.7%, in terms of revenue, during the forecast period. The demand for oil & gas is increasing rapidly in the region from developing countries such as India, Vietnam, and China. The countries across the region are pushing to develop oil fields. For instance, in February 2022, Cairn Oil & Gas and Vedanta group announced that they have discovered a new oil well in Rajasthan, India.

The European region is likely to witness a growth of 2.9%, in terms of volume, over the forecast period. The region is focusing on making a transition of its energy mix from fossil fuel to renewable energy. Moreover, the Russia-Ukraine conflict has created a negative impact on the gas supply of the region. Such factors are expected to restrain demand for coiled tubing in Europe during the forecast period.

The global coiled tubing market is highly competitive with the presence of numerous players across the globe. Owing to rising prices and a shortage in supply of oil & gas, key market players are boosting their production, which is positively influencing the market growth. For instance, in July 2021, Abu Dhabi National Oil Company (Adnoc) awarded USD 763.7 million in integrated rig-less services to Halliburton, Schlumberger, and Adnoc Drilling to boost the production capacity. Under this contract, companies are expected to provide coiled tubing services and stimulation services, chemicals/ fluid systems, and equipment. Some prominent players in the global coiled tubing market include:

This report forecasts revenue and volume growth at country & regional levels and provides an analysis of the industry trends in each of the sub-segments from 2017 to 2030. For this study, Grand View Research has segmented the global coiled tubing market report based on service, operation, application, and region:

What are the factors driving the coiled tubing market?

b. The key factors that are driving the coiled tubing market growth include rising prominence of shale reserves and enhanced focus towards optimizing well production.

How big is the coiled tubing market?

What is the coiled tubing market growth?

Which segment accounted for the largest coiled tubing market share?

b. Well Intervention & production service segment dominated the coiled tubing market with a volume share of over 66.0% in 2021, owing to extensive use of coiled tubing in oil fields.

Who are the key players in coiled tubing market?

b. Some key players operating in the coiled tubing market include Schlumberger Limited, Baker Hughes Company, and Halliburton.