The global coiled tubing manufacturing market size was valued at USD 1.2 billion in 2019 and is expected to grow at a compound annual growth rate (CAGR) of 2.9%, in terms of revenue, from 2020 to 2027. The rising focus on the development of cost-effective oil production methods is projected to aid market growth over the forecast period. The obvious advantages of Coiled Tubing (CT) operation, in terms of lower mobilization time, higher work performance, balanced well control, and greater safety, are projected to augment the product demand in the fracturing operations. Thus, the increasing number of fracturing sites in Russia is anticipated to offer lucrative opportunities to the market vendors over the forecast period. The U.S. market has observed aggressive growth over the last few years owing to the shale revolution. 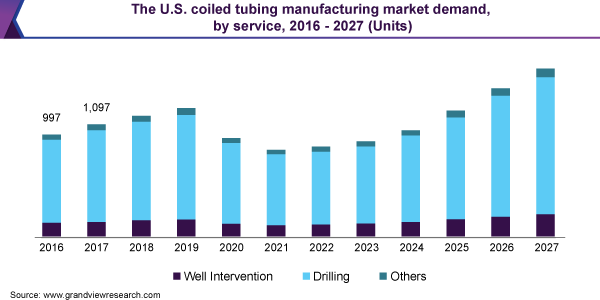 The domestic oil & gas industry’s strong focus on enhancing the well efficiencies by expanding lateral lengths and fracturing treatments pushed market vendors to innovate and develop new products. In addition, stable crude oil prices post-collapse of 2014-2015 positively aided investments in the upstream oil & gas sector, which, in turn, augmented the demand for CT strings in the country. With the beginning of FY 2020, the dynamics of the domestic oil & gas sector started to crumble as a result of a disruption in demand caused due to the COVID-19 pandemic. The turmoil created by the emergence of the global pandemic directly impacted crude oil prices, leading to a decline of nearly 66% from January 2020 to April 2020.

Since, the U.S. has been the net exporter of oil since 2011, crumbling crude oil prices coupled with reduced demand pushed the domestic operators to cut down operations to a minimal capacity. This trend is projected to continue until the crude oil prices return to normalcy. The domestic oil prices showed signs of appreciation as the U.S. Energy Information Administration (EIA) launched the inventory report on 18th September 2020. The report showed an oil inventory draw of nearly 1.6 million barrels as compared to 4.4 million barrels in the previous week.

The drilling service segment dominated the market and accounted for the largest revenue share of over 46% in 2019. The segment will retain its leading position throughout the forecast period. The demand in this segment is largely catered by North America CT operations. The coiled tubing is widely used to drill frac plugs out of the well in this region. The popular product category in the region typically includes 2 3/8” and 2 5/8” CT string for horizontal wells. The U.S. is projected to cater to the strong demand from drilling operations owing to the large shale reserves. The domestic operators are pushing for increasing the well efficiency, which is projected to boost the product demand over the forecast period. However, crumbling oil prices and demand are likely to hinder the development of new projects, thereby restricting the segment’s growth over the forecast period.

Well intervention service category is likely to observe the fastest CAGR over the forecast period. The use of CT to stimulate production in many of the suspended projects is estimated to aid the segment growth. However, the scenario looks uncertain due to the current situation of depressed oil demand around the globe. However, despite such a situation, CT operators are likely to innovate, adapt, and evolve to the current market trends. The CT operators are anticipated to ride out the current downturn by efficiently managing resources to push maximum utilization of live wells. In addition, new areas of innovation are likely to aid alternative opportunities in the form of live well work and production maintenance.

The onshore application segment led the market in 2019 and accounted for the highest revenue share of more than 77%. The segment is projected to continue its dominance registering the fastest CAGR from 2020 to 2027. The new opportunities are likely to remain limited for the segment owing to the economic turmoil caused due to the pandemic. The upstream market sentiments are fragile due to the reduced crude oil prices and falling demand around the globe. However, post-economic stability, conditions are projected to improve with a larger push to enhance oil production. This, in turn, is estimated to offer lucrative opportunities for the industry vendors over the forecast period. 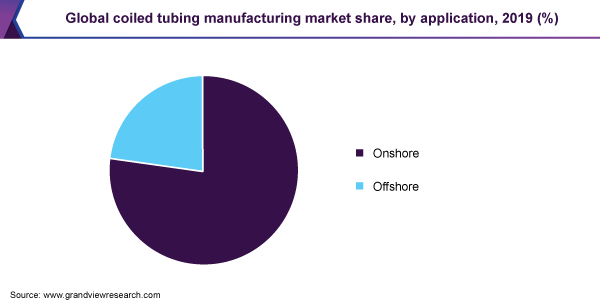 Offshore application is also projected to record a significant CAGR of nearly 2.6%, in terms of revenue, over the forecast period. The upcoming offshore projects across the coastal line of Algeria are projected to aid the segment growth over the coming years. Algerian National Oil Company (NOC) has awarded five-year contract work to WorleyParsons in 2019 to explore the offshore prospects in an area of nearly 100,000 square kilometers. Such new projects are estimated to assist the segment’s growth over the predicted timeline.

However, with the current conditions of slumping oil demand coupled with crumbling prices, the offshore upstream investments are likely to remain dull for the short term. This, in turn, is likely to put pressure on operators to reduce the expenses while marginalizing the profits. In these unprecedented times, the CT manufacturing market dynamics are projected to remain standstill owing to the lack of new investments.

North America region led the global market in 2019 and accounted for the largest revenue share of over 45%. The U.S. shale industry and its rising prominence over the last few years greatly assisted the regional market growth. The push to enhance production efficiencies while maintaining higher production led to the development of new technologies within the North America coiled tubing manufacturing market.

However, with the emergence of COVID-19, the regional market situation began to crumble as the crude oil prices plummeted to its lowest levels. In addition, falling crude oil demand in the international arena further hampered the oil & gas industry of North America. Several under-development projects came to a halt, as cash liquidity became a top priority for the regional CT operators.

Middle East & Africa is likely to remain the second-largest regional market over the forecast period. The GCC countries, which are the prominent oil producers of the region, are under severe distress owing to the collapsing economic activities since Q4 of FY 2019. The regional powers, such as Saudi Arabia, UAE, and Oman, are facing tough challenges as the international oil prices continue to decline. In addition, long due geopolitical tensions in the region are projected to hamper the development and thereby restrain the growth of the CT manufacturing market.

Asia Pacific is estimated to register the fastest CAGR of more than 4%, in terms of revenue, over the forecast period. Rising demand for fuel in the region owing to the presence of developing countries like India, China, and Vietnam is projected to offer lucrative opportunities for industry participants.

Europe is likely to witness a sluggish growth owing to the limited opportunity for CT technology. Poland, Russia, and Norway are projected to offer some assistance, in terms of demand, over the forecast period. Despite stable demand from the aforementioned countries, the region’s focus on changing its energy mix from fossil fuels to renewable energy is likely to restrain the industry’s growth over the forecast period.

The industry participants are strongly motivated to reduce expenses during these unprecedented times of economic turmoil caused due to the emergence of the global pandemic. In addition, falling crude oil demand and prices have acutely hit the downstream demand from CT operators and service providers. This, in turn, has affected new orders leading to a tremendous decline in sales value. The key operators of the market including Tenaris and Forum Energy Technologies Inc. have restricted their operations to minimal capacity in the wake of declining demand and closure of wells across the globe. Some of the prominent players in the global coiled tubing manufacturing market include:

This report forecasts revenue and volume growth at global, regional, and country levels and provides an analysis of the latest industry trends in each of the sub-segments from 2016 to 2027. For the purpose of this study, Grand View Research has segmented the global coiled tubing manufacturing market report on the basis of service, application, and region:

How big is the coiled tubing manufacturing market?

What is the coiled tubing manufacturing market growth?

b. The drilling service segment dominated the coiled tubing manufacturing market with a volume share of 45.5% in 2019, owing to its extensive use in drilling out frac plugs.

Who are the key players in the coiled tubing manufacturing market?

What are the factors driving the coiled tubing manufacturing market?

b. The key factors that are driving the coiled tubing manufacturing market include the rising prominence of shale reserves and enhanced focus towards optimizing well production.