The global concrete canvas market size was estimated at USD 328.3 million in 2019 and is expected to expand at a compound annual growth rate (CAGR) of 11.6% from 2020 to 2027. Growing infrastructural investment in emerging economies is projected to drive the market in the coming years. 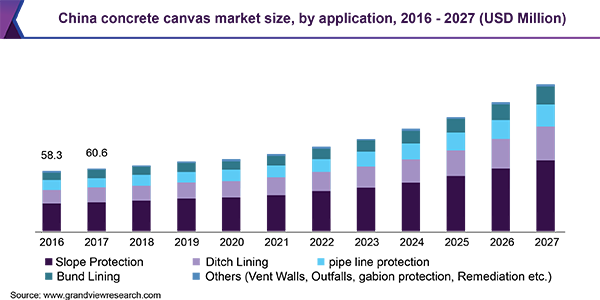 Key drivers anticipated to boost the demand for concrete canvas include easy installation, easy use, and low cost. Also, the concrete canvas is more cost-effective than conventional concrete and also provides less logistical burden. The growing inclination towards more efficient and innovative construction materials is projected to drive the market over the forecast period.

In the U.S., the market is projected to witness a CAGR of 9.0% by 2027 owing to increasing non-building construction activities in the country. In addition, ongoing industry efforts to increase awareness among constructors and engineers regarding the benefits of concrete canvas such as easy installation, cost-effectiveness, and reduced carbon footprints is expected to drive the market.

Concrete canvas is increasingly being used in multiple applications such as slope protection from surface erosion, armor capping of earth bunds in petrochemical tank farms, and to construct vent wall structure for mining. In addition, concrete canvas is also used as an alternative in concreting methods on agricultural sites across the world, including countries such as South Africa and Malaysia.

The ongoing COVID-19 crisis has put a severe impact on the market as the product is used majorly in the construction industry and restrictions on construction activities at the initial phase of the COVID-19 outbreak had reduced the demand for concrete canvas in the first quarter of 2020. These factors might hamper market growth during the forecast period.

The ditch lining segment accounted for a revenue share of over 22.3% in 2019 in the concrete canvas market. Concrete canvas is used in ditch lining to prevent the growth of weed, erosion, and silt generation. It is faster than conventional concrete solutions in installation and also requires fewer crew for installation. These factors are projected to increase product demand over the forecast period.

Increasing adoption of concrete canvas in providing effective containment and bund lining solutions is projected to drive product demand over the forecast period. Concrete canvas provides protection against abrasion and erosion due to which it is being used in various industries including oil and gas, and petrochemical.

The pipe protection segment held a significant revenue share of 16.2% in 2019. The product is used as a protective cover against leakage and corrosion in underground pipelines attributed to its ability to resist water pressure in pipes.

The military and defense segment dominated the market and accounted for the largest revenue share of over 33.0% in 2019. The product is used in various applications in the defense sector including protection, reinforcement, and erosion control. Concrete canvas is used for creating shelters for the army, which is expected to drive its demand in the sector over the forecast period. 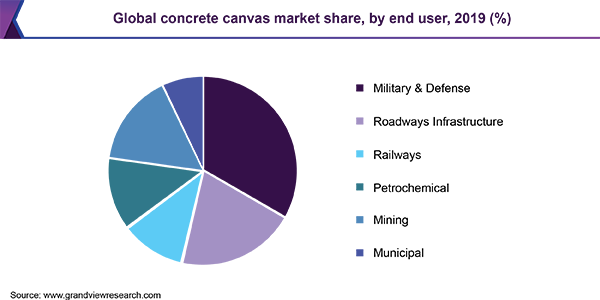 The railways segment accounted for a revenue share of around 11.0% in 2019. Concrete canvas is increasingly being used in the rail sector owing to ease of installation, reduced line possession, and improved safety offered by the product. Rising government initiatives to increase road and rail construction in emerging countries is expected to fuel market growth. For instance, the Government of India allocated USD 10.9 billion for developing national highways in the country in 2019.

The petrochemical sector is projected to witness a volume-based CAGR of 9.2% from 2020 to 2027. The demand for concrete canvas is expected to gain momentum in the coming years owing to its increasing use in erosion control and containment control applications. Growing demand for petrochemicals owing its use in construction, manufacturing, and automotive industries is projected to drive segment growth.

Concrete canvas is largely accepted in mining sites where logical efficiency is required, as the product is ideal to be used in extreme environments. The product can easily be installed in mining sites with subzero temperatures. The municipal segment held a revenue share of 22.7% in 2019. The demand from the municipal sector is projected to gain momentum in the near future owing to increasing product use in sewage applications for reducing leakage and improving flow characteristics.

Asia Pacific dominated the market and accounted for the largest revenue share of over 38.0% in 2019. Enormous product demand is attributed to the presence of various emerging economies in the region coupled with increasing road and highway construction in countries such as India, Japan, and China.

Demand for concrete canvas in Europe is driven by stringent government regulations regarding building green and sustainable buildings. For instance, the government of Europe has started a Green Building program to raise both awareness and investment in energy efficiency.

In North America, the market is expected to gain pace in the coming years due to the increasing adoption of concrete canvas in erosion and containment control applications in the petrochemical industry. In 2018, the region accounted for over 90.0% of total shale gas production, which is expected to grow in the future. Rising shale gas exploration in the U.S. is projected to increase the growth of the petrochemical industry, which, in turn, can induce product demand in the coming years.

In Central and South America, the market is likely to witness high growth over the forecast period owing to economic growth and increasing petrochemical production in the region. Moreover, rising government investment in building road infrastructure is projected to drive product demand. For instance, the government of Brazil has auctioned various infrastructural projects including 12 airports and 27 other assets.

The market has a low industry rivalry due to the lack of brand loyalty among consumers. Although with increasing demand from end-user industries and new entrants in the market, the rivalry is expected to become high in the near future. Some of the prominent players in the concrete canvas market include:

This report forecasts revenue growth at global, regional, and country levels and provides an analysis of the latest industry trends in each of the sub-segments from 2016 to 2027. For the purpose of this study, Grand View Research has segmented the global concrete canvas market on the basis of application, end-user, and region:

How big is the concrete canvas market?

What is the concrete canvas market growth?

Which segment accounted for the largest concrete canvas market share?

b. Military & Defense dominated the concrete canvas market with a share of over 33% in 2019, owing to its extensive use in shelter applications.

Who are the key players in the concrete canvas market?

b. Some of the key players operating in the concrete canvas market include Concrete Canvas Ltd, Sika Corporation, Milliken and Co., and Euclid Chemical.

What are the factors driving the concrete canvas market?

b. The key factors that are driving the concrete canvas market include growing product demand for slope protection applications, strict government regulations, and a surge in demand for Concrete Canvas from roadways and railways.