The global contraceptive market size was valued at USD 26.9 billion in 2021 and is expected to expand at a compound annual growth rate (CAGR) of 6.01% from 2022 to 2030. The growing prevalence of Sexually Transmitted Diseases (STDs) and the rising number of women with unmet contraceptive drugs & device demands are expected to propel the industry growth during the forecast period. According to the World Health Organization, among 1.9 billion reproductive-age women (15 - 49 years) globally in 2019, around 1.1 billion women require family planning. Among them, around 842 million women are using contraceptive methods for family planning and around 270 million women have an unmet demand for contraception. 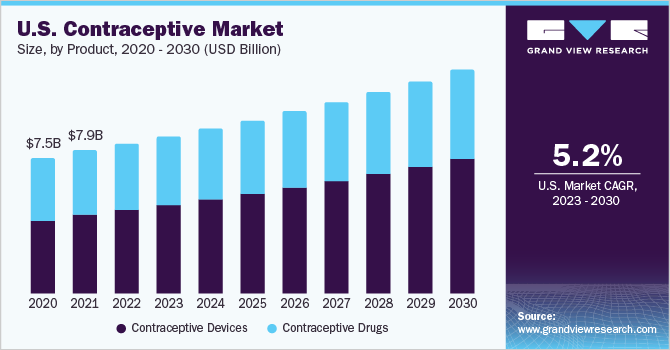 The implementation of programs targeted at reducing unwanted pregnancies and related healthcare costs and increasing user awareness levels are anticipated to propel the growth of the industry during the forecast period. Moreover, the rising number of unintended pregnancies is expected to contribute to the growth of the market during the forecast period. According to The Lancet Global Health, on average, around 121 million unintended pregnancies occurred from 2015  -  2019 globally, which accounts for about 64 unintended pregnancies per 1000 reproductive-age women. Several initiatives, such as Every Woman Every Child, Millennium Development Goals, the 2030 Sustainable Development Goals (SDGs), and Family Planning 2020 (FP2020), have been launched by governments and healthcare organizations for family planning, which is promoting the use and manufacturing of contraceptives.

For instance, Family Planning 2020 was the initiative launched in 2012 and ran up to 2020, which offered global partnerships to share knowledge and offer a right-based, person-centered approach to family planning. The initiative was further expanded to 2030 to ensure the accessibility of contraceptives and other family planning resources globally. Both the private sector (pharmacy/drug shop; general store/market; private clinics; and NGOs or Faith-based organizations) and public sector are the key providers of contraceptives globally. The private sector is primarily utilized for short-acting resupply contraceptive methods, such as condoms and contraceptive pills, and has captured and maintained a relatively stable share of the industry.

According to the article published in 2022 in Global Health: Science and Practice journal, around 41% of females who use contraceptives in Asia obtain contraceptives from private-sector sources, and around 56% of females use public sources. In the total average of 36 countries evaluated in the Low- and Middle-income Countries (LMIC), around 63% of women obtain it from private-sector sources, and around 34% of women use public-sector sources. Governments in various countries have been conducting extensive campaigns and sex education programs to enhance awareness among youth and promote the usage of contraceptives against STDs and unwanted pregnancies. International and government healthcare bodies, such as World Health Organization (WHO) and the Centre for Disease Control and Prevention (CDC), are playing a significant role in raising awareness regarding safe sex by using condoms. 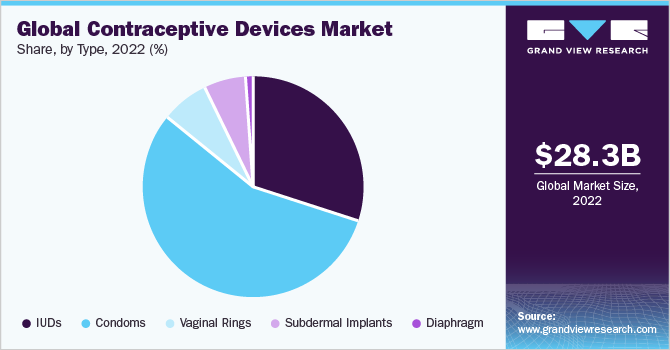 The condoms segment held the largest share in 2021 owing to the rising demand in the regions of Europe and the Asia Pacific. The growth can also be attributed to the demand from the public sector source. According to the Family Planning Report 2021 report, around 378.1 million units of condoms were supplied by the Department of Health & Family Welfare in India. The contraceptive drugs segment is expected to witness lucrative growth during the forecast period. The segment is further sub-segmented into contraceptive pills, patches, and injectables. The contraceptive pill segment held the largest share of the segment in 2021.

North America dominated the global industry in 2021 with the maximum revenue share of more than 32.90% and is expected to maintain its position throughout the forecast period owing to the high incidence of abortion, rising population of women within the age group of 15-44 years, and high patient awareness levels in the region. The launch of generic and low-cost drugs and devices has also led to an increase in the demand for contraceptives by teenagers. In April 2022, Reckitt Benckiser launched a new condom category, Durex Intense. Asia Pacific is projected to witness the fastest CAGR during the forecast period. 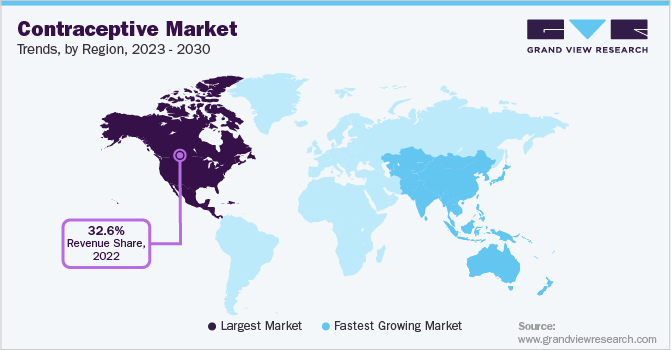 The growth can be attributed to the rising number of government initiatives, growing demand for population control, and a decrease in the unintended pregnancy rate. According to the Center for Reproductive Rights, around 53.8 million unintended pregnancies occur every year in Asia, and around 65% of those are abortion cases. The contraception prevalence rate among married adolescents in Asia is around 41%. Europe held a significant market share in 2021 due to suitable reimbursement scenarios for the use of contraceptives.

According to the Center for Reproductive Rights, Access to Contraceptives in European Union Report, in Germany, IUDs, emergency contraception, and hormonal contraceptives with a prescription are covered under the mandatory health insurance scheme for females under the age of 18. There is a 10% co-payment for women aged 18 to 19 years of age with a capped value of 10 euros per prescription. Contraceptives are covered under the scheme for women aged 20 years and above when intended for other reasons apart from the prevention of pregnancy.

The industry is highly competitive due to the presence of several major manufacturers and constant R&D investment by them. Mergers & acquisitions, new product launches, growing geographical presence, and expanding product pipelines are the major strategies adopted by the companies to stay competitive. For instance, in July 2021, HRA Pharma received approval from MHRA to launch a contraceptive pill (Desogestrel-only pill), which will be available OTC in the U.K. Some of the prominent players in the global contraceptive market include:

This report forecasts revenue growth at the global, regional, and country levels and provides an analysis of the latest industry trends in each of the sub-segments from 2017 to 2030. For this study, Grand View Research has segmented the global contraceptive market report based on product and region: 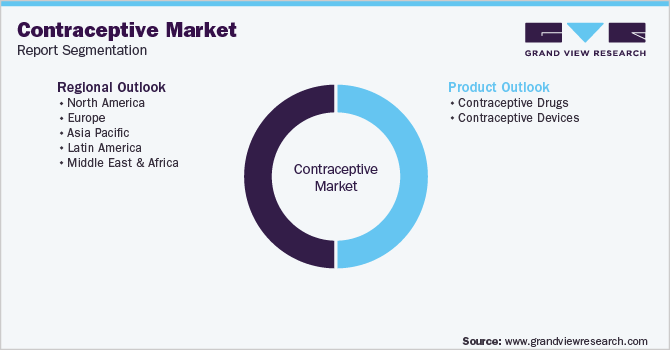 How big is the contraceptive market?

What is the contraceptive market growth?

Which segment accounted for the largest contraceptives market share?

Who are the key players in the contraceptive market?

What are the factors driving the contraceptive market?

b. Key factors that are driving the market growth include easy availability of contraceptive products and a rising number of government initiatives to spread awareness regarding contraceptive use.

The demand for condoms & pills increased from the second half of 2020 to the first half of 2021 in the U.S. toward the end of 2021, the demand for condoms reduced to pre-pandemic levels as ease in restrictions and vaccination drives improved access to the prescribed methods of contraception. The report will account for COVID-19 as a key market contributor.