The global control release drug delivery market was valued at USD 47.39 billion in 2021 and is anticipated to expand at a CAGR of 10.5% over the forecast period. Changing prescription patterns of physicians preferring controlled release drug delivery over conventional systems owing to the benefits such as high-therapeutic efficacy, better patient compliance, and reduced treatment cost are expected to contribute towards the growth of the market over the forecast period. Moreover, being a part of a highly competitive and fragmented market, pharmaceutical companies are pro-active with the changing market requirements and are continuously investing on developing controlled release drug delivery system, thereby significantly driving the demand. 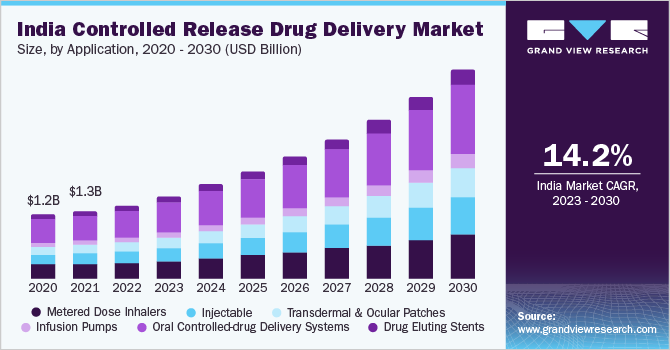 Constantly rising R&D expenditure by pharmaceutical development companies that are focused on the development of efficient therapy for chronic and non-communicable complications such as cancer, diabetes, and hypertension are expected to boost the market growth over the forecast period. For instance, Taris an R&D-based biomedical company’s pipeline product TAR-200 (Gemcitabine) indicated for the treatment of bladder cancer includes a controlled release drug delivery system. Furthermore, in 2019, Johnson & Johnson completed the acquisition of Taris Biomedical. Its lead investigational product TAR-200 is reported to be one of the main reasons behind the acquisition.

The rising geriatric and pediatric population globally is one of the major factors contributing to the market growth, largely due to the non-adherence to the medication regimen as it is very common among these age groups. Geriatric populations suffer from compromised physical, mental, and biological functions that affect their medicine intake. Also, their body cannot tolerate high doses and harsh side effects of drugs. Thus, the demand for controlled release drug delivery systems is expected to grow with the steeply rising patient population.

Controlled release drug delivery allows a significant reduction in dose and dosage frequency, prevents abnormal fluctuations of plasma drug levels, improves efficacy, enhances patient compliance, and achieves uniform drug effects of the administered drug. In comparison to traditional delivery systems, the control releases drug delivery systems achieve a prolonged therapeutic effect, delivering drugs at the target site at a pre-determined that too at a predictable drug release kinetics. Thus, with several added benefits offered by the controlled release delivery system, their adoption is expected to increase at a notable rate over the forecast period.

Targeted delivery held the largest market share of more than 23.0% in 2021 as a large number of market participants have a strong portfolio for the technology. Targeted delivery offers the preferred site of action and can aid in allowing drugs to be away from sites that might lead to drug toxicity. Since these systems provide increased bioavailability, targeted technologies provide localization of drug, which leads to improved absorption, reduced fluctuation in circulating drug levels, and low risk of side effects it’s a commonly preferred drug delivery technology.

The rising demand to improve the shelf-life and achieve controlled drug release of highly complex and unstable molecules such as proteins, vitamins, and antioxidants is expected to foster the growth of the microencapsulation segment over the forecast period. For instance, vitamin A is characterized by poor water solubility and chemical stability, but when microencapsulated the shelf life of the product increases, concomitantly helping in achieving controlled drug release.

Implantable systems provide improved efficiency, reduced side effects, convenience, and ensure linear delivery of drugs over a specified period. Coacervates represent a novel class of drug delivery vehicles, developed as carriers of small molecule drugs and proteins. These include heparin-based coacervates holding synthetic polycations for controlled delivery of growth factors. With the increasing usage of these systems, they are anticipated to command a considerable share in the controlled release drug delivery market in near future.

The feedback-regulated drug delivery systems accounted for a large share of 26.3% in 2021 owing to their therapeutic efficiency in the treatment of disorders such as diabetes. Additionally, the increasing R&D activities being conducted to capitalize on the potential of feedback-regulated controlled drug delivery systems as antidotes are expected to aid the market growth.

Chemically activated systems consist of pH activated, hydrolysis activated, and enzyme activated systems. The ability to respond promptly and specifically to the metabolite of interest that results in improved drug therapy is the factor driving the growth of the segment. For instance, optimum and controlled release of insulin is established in hyperglycemic patients using an enzyme-activated release mechanism. 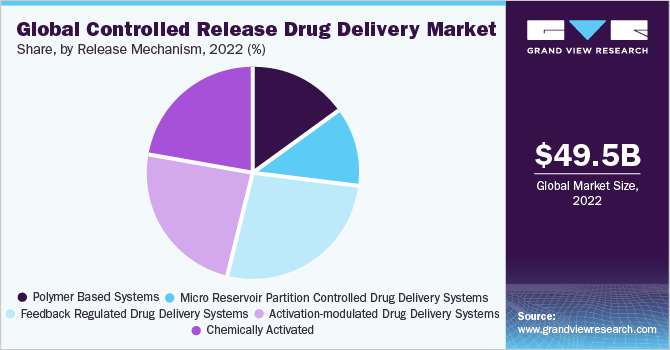 In the recent past, chemically activated delivery systems have gained tremendous popularity. Market players are also investing in the segment in order to strengthen their portfolios. For instance, LYRICA Pregabalin and QuilliChew ER chewable tablets, marketed by Pfizer, Inc., are chemically activated delivery systems that offer controlled release. The segment is projected to represent a sizeable share in the market throughout the forecast horizon.

The oral controlled segment was the leading revenue contributor in 2021 with a share of more than 36.4% owing to its frequent usage and availability. Metered dose inhaler is another lucrative segment that is expected to grow at a significant rate over the forecast period. Rising prevalence of respiratory disorders, frequent product, and technological advancements are the factors expected to drive the growth of the segment in long run. For instance, Gofire Inc, a medical technology company introduced a metered dose inhaler in 2019, that features a unique dose completion alert signal assuring accurate dosing. Furthermore, Aradigm Corporation’s current product pipeline consists of three drugs for treatment of bronchiectasis, cystic fibrosis, and smoking cessation that make use of metered dose inhalers as they are a relatively easy way to administer drugs.

The injectable segment is projected to grow at the fastest pace during the forecast period owing to wide product diversity and usage in the treatment of various diseases. Long-acting injectables are preferred to conventional forms of delivery as they offer several advantages, including predictable drug release profile during a definite period of time, enhanced patient compliance, improved systemic availability of drugs, ease of application, and thus an overall reduction in medical costs incurred.

Europe accounted for the second-largest share in 2019 owing to increasing research and developmental activities and the presence of major pharmaceutical companies in the region. With the significant rise in patients suffering from chronic diseases such as cancer, diabetes, and COPD, the regional market is poised to tread along a healthy growth track over the coming years. Asia Pacific is likely to witness the highest CAGR during the forecast period. The region has been gaining global attention due to increasing development in the pharmaceutical industry. Rapid expansion in the Indian and Chinese pharmaceutical industries is positively affecting the market in the region. The presence of a large geriatric population in Japan is another major factor triggering product adoption.

Various companies make use of a wide range of technologies that ensure controlled release. Major pharmaceutical companies are also indulged in implementing controlled release to increase consumer base and product penetration. Thus, the market consists of various players facing intense competition from other players and new entrants. In addition, key participants are indulged in mergers and acquisitions to expand their existing product portfolios. For instance, in January 2016, Capsugel announced the completion of the acquisition of Xcelience and Powdersize, which aided the company to expand its existing resources with respect to its dosage form solutions business segment.

The market is highly fragmented as several developers are engaged in the development of drugs that cater to specific patient requirements. Major players are also engaged in the development of novel controlled release drug delivery technologies. For instance, in October 2015, Capsugel announced the launch of enTRinsic drug delivery technology that provides complete enteric protection along with targeted release into the upper gastrointestinal tract for a variety of compounds. Some of the prominent players in the global controlled release drug delivery market include:

This report forecasts revenue growth at global, regional & country levels and provides an analysis on the industry trends in each of the sub-segments from 2018 to 2030. For this study, Grand View Research has segmented the global controlled release drug delivery market report based on technology, release mechanism, application, and region:

How big is the controlled release drug delivery market?

What is the controlled release drug delivery market growth?

b. North America dominated the controlled release drug delivery market with a share of 42.85% in 2021. This is attributable to the rising burden of chronic diseases such as cancer, diabetes, and cardiac disorders.

Who are the key players in controlled release drug delivery market?

What are the factors driving the controlled release drug delivery market?

b. Key factors that are driving the controlled release drug delivery market growth include the increasing preference of physicians for controlled release systems owing to benefits such as high-therapeutic efficacy, better patient compliance, and reduced treatment cost.