The global cresol market size was valued at USD 580.0 million in 2015. Cresol is formulated from petroleum and coal tar, which are some of the important components of creosote, a wood preservative. Increasing demand for vitamin E in food and dietary supplements, owing to rising consumer focus on a healthy diet, is also anticipated to drive product demand over the coming years.

Cresol derivatives have gained significance in the production of vitamin E and electronic encapsulation products. Surging demand for computers, tablets, smartphones, and display devices is expected to drive the electronics industry over the forecast period. Although these segments are niche applications for the product isomers, the electronics and food industries are both anticipated to offer immense growth potential for the market across Asia Pacific and Europe. 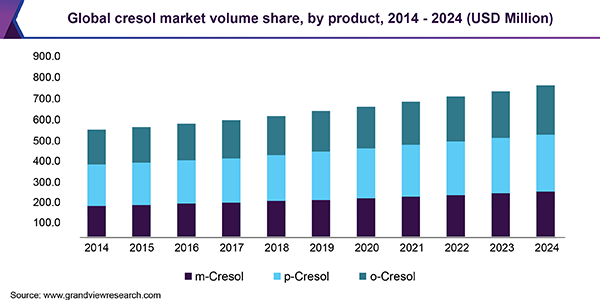 Compounds such as meta, para, and ortho isomers are manufactured from coal tar and petroleum or toluene. Choice of raw material is majorly governed by production efficiency and waste disposal costs associated with the manufacturing process.

Toluene forms a significant source in the product manufacturing process. Hence, the pricing of toluene has a direct impact on the cresol market. Major para and ortho isomer producers are dependent on toluene supply. Growing toluene demand in other applications such as xylene and TDI has urged industry participants to establish long-term contracts with suppliers.

Another major raw material used in meta and para isomers production is cymene, a bio-based material. Apart from raw material prices, other factors influencing the prices of these products include production site location, separation techniques, and specific grades. Owing to the close boiling points of meta and para isomers, additional costs incurred in the separation of these products from raw material have contributed to its high pricing.

Derivatives of ortho and meta isomers form an essential ingredient in agrochemicals and pesticides. However, stringent health and safety regulations regarding cresol content in consumer goods such as cosmetics, disinfectants, and other personal care products are expected to hamper product demand over the long term.

The global cresol market has witnessed the implementation of stringent regulations regarding the adverse impact of its manufacturing process. Waste generated in toluene-based cresol production is toxic to the aquatic environment. Hence, industry participants have focused on waste management before its discharge. For instance, Atul Ltd., in collaboration with Degussa, has been utilizing an automated waste recovery plant that minimizes waste disposal costs and enhances waste recovery efficiency.

p-Cresol emerged as the leading product segment in 2015 and is estimated to register a moderate CAGR of 3.0% from 2016 to 2024. It is majorly consumed in the production of BHT, an antioxidant used in the food, cosmetics, and pharmaceutical sectors. Product demand in the butylated hydroxytoluene application segment accounted for over 50.0% in 2015.

Cresol derivatives have gained major significance in additives used for flavoring agents and perfumery chemicals. The derivatives are also used in manufacturing adhesives, plasticizers, and additives in solvents for degreasing applications.

m-Cresol acts as a chemical intermediate for producing resoles that are used in brake and clutch linings. Another important product, thymol, obtained from this isomer is used as a flavoring agent in pharmaceutical and food products. Owing to its anti-microbial characteristic, meta isomer has witnessed significant growth in antiseptic and disinfectant applications. Increasing demand for efficient stabilizers in chemical intermediates and pesticide production is expected to drive product demand over the forecast period.

o-Cresol finds significance as a building block for the production of herbicides, sealing material for electronics, and precursor for dye intermediates. Major derivatives obtained by chlorination of ortho-cresol are used in plant protection agents. o-Cresol derivatives form a significant component in pesticides. Growing concerns regarding crop protection in major agricultural sectors such as cereals and vegetables is anticipated to drive product demand.

Asia Pacific dominated the global demand in 2015 and is expected to sustain its market share over the next few years on account of growing product demand in the agrochemicals, vitamin E, and electronics sectors in the region. Despite the economic downturn in China, the presence of various manufacturing industries in the country has played a crucial role in market penetration for cresol derivatives in the region. Product demand in China is expected to exceed a net volume of 45-kilo tons by 2024.

In terms of revenue, the Europe market was valued at USD 205.3 million in 2015 and is expected to witness a moderate growth rate on account of continued demand for aroma chemicals and pharmaceuticals. Cresols have witnessed a significant increase in regional demand due to its derivatives' chemical properties that are used as a precursor for vitamin E, fragrance, dyes, and pharmaceutical sectors. However, sluggish economic growth in the region is expected to hamper market expansion to a certain degree. 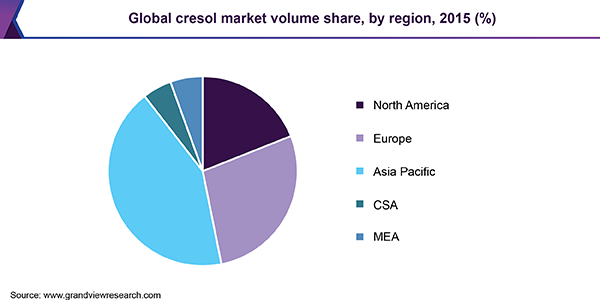 Moreover, Europe is expected to lose share to high-growth markets of Asia Pacific and CSA. Rising concerns pertaining to the effects associated with deficiency of micronutrients are expected to drive vitamin E demand in the latter regions over the forecast period. The growing population, coupled with rising awareness regarding fortified foods and beverages in the Asia Pacific is expected to impact the regional market. Central and South America are anticipated to register a 3.8% CAGR over the forecast period.

The global market is highly fragmented with the presence of prominent manufacturers such as Lanxess, Sasol, Atul, and SABIC. Other major companies operating in the industry include Anhui Haihua Chemical Technology Co., Ltd., Konan Chemical Manufacturing Co., Ltd., Mitsui Chemicals, and RÜTGERS. These companies have established a strong market presence in their respective countries and play a major role in product pricing.

Major producers such as Sasol Phenolics, RÜTGERS Chemicals, and Dakota Gasification have integrated their raw material production with meta, ortho, and para isomer manufacturing processes and are focused on isolating these isomers from cresylics and coal tar. Companies such as SABIC, Lanxess, and Mitsui Chemicals are focused on synthesis routes for cresol production.