The global protective coatings market size was estimated at USD 30.28 billion in 2019 and is anticipated to grow at a compound annual growth rate (CAGR) of 7.7% from 2020 to 2025. The rising construction industry is significantly driving growth. The protective coating is widely used in various end-use industries including construction, oil and gas, aerospace, industrial, marine, automotive, power generation, mining, and others. The coating is applied over various surfaces to ensure protection from the external environment that could damage the function or integrity of an item or part.

The growth in the construction industry, globally, has been a significant factor contributing to the demand for protective coatings. Rising population, urbanization, and industrial growth have resulted in the rising need for infrastructure development and construction across the globe, most notably in fast emerging regions such as Asia Pacific, Central and South America, and Middle East. 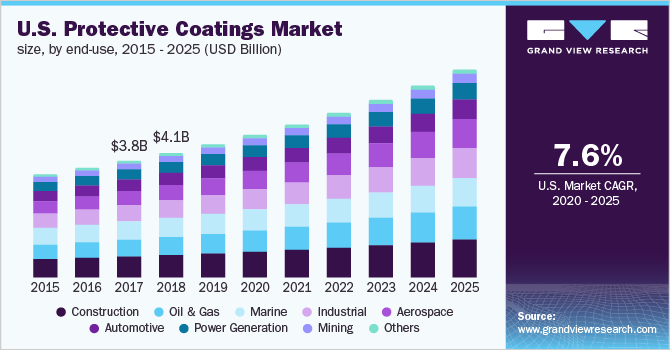 The construction industry is witnessing a favorable growth across the globe on account of increasing infrastructural developments. The construction industry requires several protective coating formulations to meet the requirements of different applications. Abrasion and wear-resistant, high-temperature, intumescent, and water-resistant coatings are some of the commonly used protective coating products in the industry. Protective coatings are also applied to different construction equipment to ensure resistance to corrosion and wear and tear, durability, and operational efficiency.

For instance, in January 2019, the China Railway Corporation announced plans to construct 6,800 km of new railway line including 3,200 km of high-speed rail, indicating a 40% increase in the construction of new tracks from 2018. In addition, rising investments from leading MNCs in the country owing to the easy availability of raw materials and cheap labor are further propelling the growth of the construction industry.

However, strength regulations regarding toxic solvents are anticipated to impact market growth. Volatile Organic Compounds (VOCs) are required to conform to various statutory regulations and legislations. These organic compounds, widely utilized in protective coatings and technical applications, are subject to several governmental and federal regulations for controlling VOC emissions and to limit human exposure to toxic substances.

The construction industry requires various protective coating formulations to fulfill the needs of different applications. Growing population, increasing urbanization rate, and industrial growth have resulted in the growing need for infrastructure development and construction globally, most notably in developing regions such as Asia Pacific, the Middle East, and Central & South America.

Countries such as China, Japan, India, and other southeast Asian countries are majorly contributing to the rise of the construction industry in the Asia Pacific. Increasing industrialization & urbanization, growing middle-class population, and improving living standards are the major factors driving construction growth in this region.

Central & South America and the Middle East & Africa are among the potential markets for construction industry. Rising GDP, increasing disposable income, growing importance of manufacturing and industrial sectors, and low cost of production are the factors attracting investors to these regions. In addition, rising efforts by the governments to develop their respective country’s infrastructure and housing sector are further anticipated to fuel the growth of the construction industry, which, in turn, are anticipated to boost the demand for protective coatings over the forecast period.

Increasing need for treatment of water for efficient usage has increased rapidly during the decade. Treatment of wastewater has gained popularity throughout the globe to prevent damage to the environment since, wastewater contains harmful substances such as human waste, oils, food scarp, chemicals, soaps, and others which require treatment before letting off to the environment. Concrete due to its higher water retention attribute is used in manufacturing of water tanks, but when exposed to chemicals for long, the concrete gets damaged, hence to avoid such long term damages, protective coatings are applied over the substrate which has led to the increase in demand for protective coatings.

As per the Clean Air Act amendments, the EPA has implemented programs to reduce emissions of VOC and related elements that lead to ozone degradation. The agency has implemented the National Ambient Air Quality Standards (NAAQS) and may also sanction areas where the manufacturers have to follow the set of standards. Thus, stringent regulations by the EPA, OSHA, EU, and other regional agencies across the globe are expected to challenge the growth of protective coatings market over the forecast period.

Solvent borne was estimated as the largest formulation segment in 2018. The solvent borne protective coating is widely used in industrial, oil and gas, marine, and automotive sectors. In the industrial sector, solvent-borne coatings are used where the components may be susceptible to rusting and where it is not advisable to use water-borne coatings. In addition, they are used in industries having high humidity and corrosive gases.

Stringent regulations regarding VOC emissions in developed economies, particularly in the U.S. and the U.K., are expected to challenge the growth of the segment. Solvent borne coatings are now being replaced by greener alternatives and bio-solvents owing to their environmental benefits, which may challenge the growth of this segment over the forecast period. Solvent borne coatings are expected to witness a growth in demand in emerging countries such as China, India, Brazil, and Russia owing to the rapid infrastructure development in these countries.

Construction was the largest end-user segment, accounting for over 20.53% of the revenue share in 2019. Protective coatings are used for enhancing the durability and protecting the structure from fire, corrosion, and UV radiation. They are used to boost thermal resistance and reduce the impact of corrosive gases on industrial structures.

Favorable government policies concerning tax benefits for infrastructure development have boosted the growth of this segment in the countries from Asia Pacific, such as India and China. Infrastructure development is anticipated to gain momentum over the forecast period on account of new socio-economic development plans. Construction companies such as Larsen & Toubro Limited, DLF Limited, Vinci SA, Bechtel Corporation, and Balfour Beatty plc, are some of the potential customers of protective coatings.

Epoxy resin was the largest segment occupying over 38.21% market share in terms of revenue in 2019, followed by Polyurethane. Epoxy coatings are used in structural parts in the construction to enhance durability, strength, and resilience. They are also used in floor toppings, grouts, crack injection, and adhesives.

In addition, the product is used in home appliances such as refrigerators and washing machines to protect them from food acids, corrosive gases, and humidity as well as to extend service life and improve aesthetics. Rising demand for epoxy resin can be attributed to low VOC content and excellent anti-corrosion performance along with augmented requirements from aerospace and automotive industries. Increasing demand for shipbuilding and repair, petrochemicals, and steel in China has resulted in a surge in demand for epoxy resin. 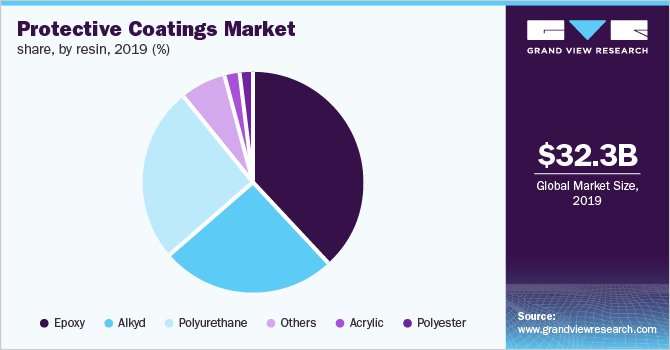 In addition, increasing investments in infrastructure development in Asia Pacific and Middle East are expected to drive the demand for epoxy resin during the forecast period. Some countries, such as Indonesia and Thailand are the key automobile manufacturers and shipbuilding participants that majorly use epoxy protective coatings.

Asia Pacific was the dominant regional segment occupying over 56.13% of the revenue share in 2019 followed by Europe. The region is projected to account for a significant market share over the forecast period on account of the ascending demand for protective coatings from end-users, such as aerospace, automotive, mining, power generation, industrial, oil and gas, and others. 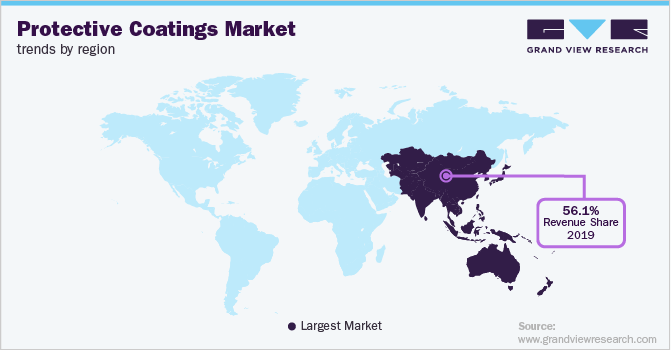 Asia Pacific has a dense population, mainly in China and India; which is involved in a large number of infrastructure development and construction activities. The availability of raw materials, as well as less stringent laws regarding VOC radiations as compared to North America and Europe, have given huge opportunities for the growth of end-use sectors such as automotive, marine, construction, and manufacturing.

China protective coating market is expected to witness growth over the forecast period on account of increasing infrastructure development and rising power generation capacity. Development among key manufacturing industries including oil & gas, construction, and aerospace is likely to significantly contribute to the rising demand for protective coatings in China.

In Asia Pacific, China led the protective coatings market both in terms of volume and revenue. Factors such as the presence of numerous end-users, close proximity to raw material suppliers, and rapid industrialization and urbanization, especially in India and China are anticipated to boost the regional product demand.

Asia Pacific has a huge population, particularly in China and India, and is involved in a large number of infrastructure development activities. The availability of raw materials coupled with less stringent laws regarding VOC emissions as compared to North America and Europe has given huge opportunities for the development of end-use sectors such as automotive, marine, and manufacturing, among others.

Construction industry is witnessing significant growth in the region. Countries such as the U.S. and Canada are characterized by low-risk environment and a robust financial sector. This has provided multitude of opportunities for investors in recent years, which is expected to trigger infrastructure spending in the region. This, in turn, is projected to positively impact the demand for protective coatings in the North American construction industry.

The global market is fragmented in nature with the presence of various key players such as Akzo Nobel NV; Arkema SA; Axalta Coating Systems; PPG Industries, Inc.; The Sherwin-Williams Company; RPM International, Inc.; and Wacker Chemie AG along with some small and medium global and regional players. The global players face intense competition from each other as well as from the regional players who have well-established supply chain networks and are well aware of the regulations and suppliers in their market.

This report forecasts revenue and volume growth at global, regional, and country levels and provides an analysis of the latest industry trends in each of the sub-segments from 2014 to 2025. For the purpose of this study, Grand View Research has segmented the global protective coatings market report on the basis of product, component, application, end user, and region: 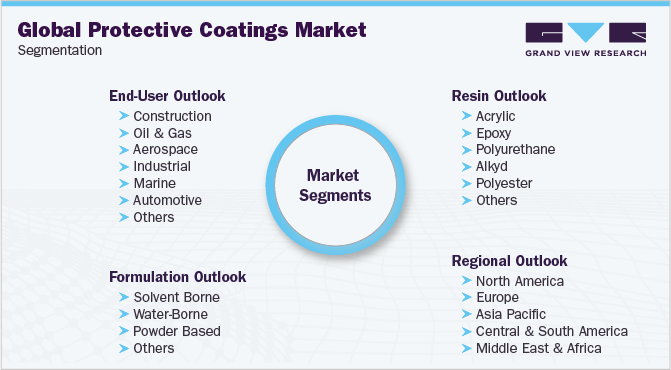